POT PANEL TO HIRE DIVERSITY EXPERT: The Maryland Cannabis Commission announced Monday it will hire a consultant to review what steps — if any — it could take to improve diversity in the state’s nascent medical marijuana industry. The consultant will determine if it is feasible to conduct a study of whether minorities have been unfairly excluded from the industry, among other tasks, reports Erin Cox in the Sun.

WISCONSIN RULING & MARYLAND DISTRICTS: A federal court’s striking down of Wisconsin’s legislative redistricting as unconstitutionally Republican-centric has invigorated a pending GOP challenge to a Maryland congressional district as unconstitutionally favorable to Democrats, Steve Lash reports in the Daily Record.

KAMENETZ TO SHIELD IMMIGRANTS: Baltimore County Executive Kevin Kamenetz, weighing in on a divisive political battle that has erupted since Donald Trump was elected president, added his name Monday to the growing list of Democrats vowing to shield immigrants from deportation, John Fritze of the Sun reports. Kamenetz, who is considering a bid for governor in 2018, said he supports efforts by universities to create “sanctuary campuses,” and said he had directed county police to avoid taking part “in any effort” to identify the immigration status of students. 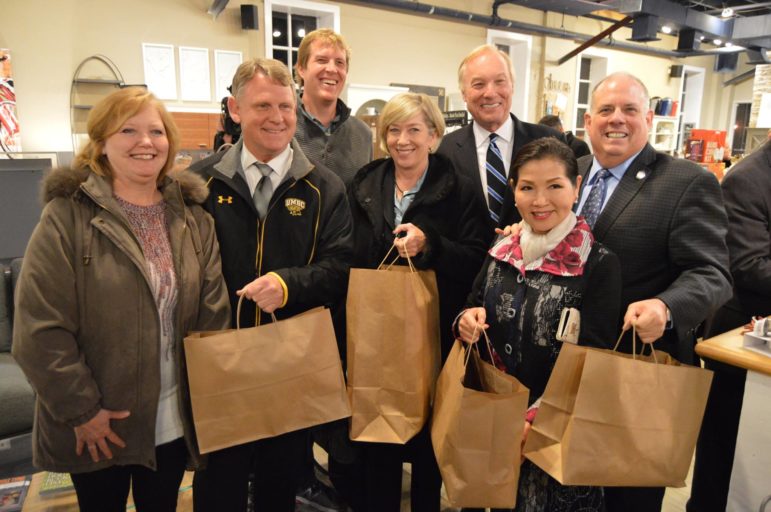 GIVING TUESDAY: Giving Tuesday was a smart idea, but now it’s gotten to be overkill. Everybody has their hands out. Having our happy hour on Giving Tuesday was simply a happy accident of when the governor was available to guest bartend. But even if you can’t attend tonight’s event at Harry Browne’s (tickets and sponsorships are still on sale), you can still make a tax-deductible contribution to support independent coverage of state government and politics. Thanks for putting up with all these solicitations.

MO CO DEVELOPERS AIDED TERM LIMITS: Montgomery County real estate developers and builders put some late financial muscle behind the successful term limits ballot initiative, according to a post-election filing with the state, Bill Turque reports for the Post. The real estate sector kicked in about $21,000 of the $25,000 in contributions collected in late October and early November by Voters for Montgomery County Term Limits.

GOP SUIT THREATENED: As Frederick County’s Republican Central Committee amended its bylaws on Monday, one member and her attorney said she will sue if the committee tries to oust her. Jeremy Bauer-Wolf of the Frederick News Post writes that the threat of a possible lawsuit from JoeyLynn Hough comes after the central committee on Monday amended its bylaws regarding its code of conduct, censures and removal of its members.

VAN HOLLEN CALLS FOR PEACE AT PIPELINE: Sen.-elect Chris Van Hollen on Monday called on the Army Corps of Engineers to “deescalate” the standoff over a pipeline in North Dakota that has been the subject of months of demonstrations and reverse its decision to evict protesters, John Fritze of the Sun writes. Opponents of the pipeline are concerned about the potential effects on drinking water on the Standing Rock Sioux reservation and farther downstream on the Missouri River, as well as destruction of cultural artifacts, including burial sites.

FORMER DEL. McCLELLAN DIES: Western Maryland has lost a former state delegate who played a large role in the city of Frederick’s downtown revival after a devastating flood in 1976, the Daily Record is reporting.  James R. McClellan said Monday that his 90-year-old father James “Doc” McClellan died Saturday at a Frederick-area retirement community. He says the cause of death was old age.