REINTEGRATION AFTER CONVICTION: Eleanor Mueller of CNS reports that those convicted of a crime in Maryland may soon find it easier to integrate into society, should the state adopt recommendations reviewed by a workgroup in the state capital on Tuesday. In addition to criminal penalties imposed at sentencing, there are legal and regulatory restrictions — commonly known as collateral consequences — that place those convicted in legal limbo.

STORMWATER FEES IN HOWARD: Howard County businesses, many of whom have long decried stormwater fees as unfair and asymmetric, are pushing the county to craft financial incentives to motivate commercial property owners to manage stormwater runoff, reports Fatimah Waseem for the Howard County Times.

FRACKING PROTEST IN FREDERICK: The sound of passing cars honking and a “ban fracking now” chant pierced the exterior walls of Winchester Hall as the Frederick County Council met inside Tuesday night, Danielle Gaines and Samantha Hogan write for the Frederick News Post. More than 100 demonstrators organized by “Don’t Frack Maryland” gathered in front of the county’s seat to oppose draft state regulations that would open up fracking in Maryland if state lawmakers don’t pass legislation this year to ban the controversial practice.

MO CO TO BEGIN SCHOOL LATER: The Montgomery County Board of Education on Tuesday voted unanimously to begin school after Labor Day next September and end the school year no later than June 15, 2017. The board agreed to follow Gov. Larry Hogan’s executive order signed in August that required all school districts to start school after Labor Day beginning with the 2017-2018 school year. Initially, the board had said it would seek a waiver, Bethesda Beat is reporting.

SANCTUARY CITIES & FEDERAL FUNDS: The election of Donald Trump has Democratic cities from Washington to Los Angeles vowing to protect undocumented residents from being deported, even at the risk of losing millions of dollars in federal funding. The term sanctuary cities could also apply to jurisdictions that prohibit their agencies from denying services to people who are in the country illegally, inquiring about immigration status or alerting federal authorities to suspected illegal immigration. That puts the District, Prince George’s County, Baltimore and several other jurisdictions in the region on the potential hit list, report Antonio Olivo and Peter Jamison in the Post.

HARRIS PUSHES AGENDA: Maryland’s sole GOP member of Congress says he is determined to make sure that House Republicans stay faithful to conservative policies, even as they welcome the populist presidency of Donald Trump, Jenna Portnoy writes in the Post. Rep. Andy Harris is running for chairman of the House Republicans’ think tank, a caucus known as the Republican Study Committee, which considers itself the last line of defense for those who worry that Trump could compromise conservative values.

BOLTON BEING CONSIDERED: Even when he was a student at the McDonogh School, John Bolton had a flair for foreign policy — and a sharp tongue that was sometimes less than diplomatic, writes John Fritze for the Sun. Now, a half-century later, the Baltimore native is one of at least two candidates President-elect Donald Trump is considering for secretary of state, a marquee Cabinet post that will signal to the world what kind of White House the businessman and political outsider intends to lead.

EHRLICH HAS NOT BEEN CALLED: “Absolutely not true.” That’s what Bob Ehrlich told MSNBC’s Brian Williams Tuesday night when asked about rumors that he has been interviewed for a job in the Trump administration. While saying “if the president of the United States ever calls you, you take the call obviously,” Bob Ehrlich telling Brian Williams on MSNBC he is not “in-the-running” right now for a cabinet position in the Trump administration. The interview appears on WBAL-AM. He talks about other Trump issues as well.

CARSON SAYS NO: Ben Carson, a retired neurosurgeon, didn’t let his lack of experience in elected office stop him from running for president. But now the former Republican candidate has taken himself out of the running for a Cabinet position in Donald Trump’s new administration because he believes he lacks the background necessary to manage a federal agency, according to Carson’s longtime advisor, Chris Megerian writes in the Sun. 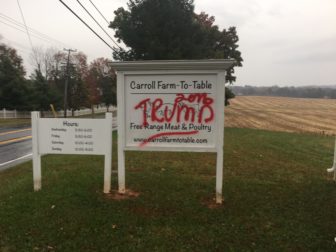 This sign at the Carroll Farm in Ellicott City was vandalized the night of the election. The photo comes from Chris Merdon who runs the farm.

FROSH ON HATE CRIMES: Maryland Attorney General Brian Frosh said it’s “disappointing” that Maryland is part of a national rise in hate crime incidents since the election. Frosh is interviewed on WBAL-AM. The attorney general calls incidents of racist graffiti spread on schools and churches in Montgomery County, and a Howard County teen posting pictures in blackface disturbing, and says they amount to hate crimes that should be reported to police.

POLITICS IN THE CLASSROOM: The raw emotions being voiced by young people across the country after the presidential election are spilling into school hallways and classrooms, prompting administrators and teachers to search for ways to help students cope with the political and social fallout. In the Baltimore region, racist graffiti has been scrawled across bathroom walls in suburban schools, frightened immigrant students have sought reassurance that they would not be deported, and principals have instructed staff and students to act with civility and respect, reports Liz Bowie in the Sun.

THE DANCE TWEET: On election night, a former Montgomery County schools superintendent posted a message on social media suggesting educators show Muslim, black, Latino, Jewish, disabled “or just non-white” students “that you love them and will protect them!” Dallas Dance, the current superintendent of Baltimore County Public Schools, re-tweeted that message on his Twitter account Wednesday morning. And then, opines the editorial board for the Sun, a whole lot of stupidity broke out. The editorial board urges his retention.

PART 5 of COLUMBIA AT 50: POLITICS: As the election returns came in the night of Nov. 5, 1974, Howard County’s old guard was riding high. It looked like their campaign to “Beat the BLOC VOTE” from Columbia had worked. Republicans would get their first county executive, and car dealer Charlie Miller, who had approved the plans to build Columbia as an elected county commissioner, would get to stay on the County Council. But as the results from Columbia precincts poured in later, elation turned to shock. In Part 5 of his series on Columbia at 50, Len Lazarick of MarylandReporter.com writes about the political life of this new town.

RIGGED VOTING: Wanna vote every day for at least a week? Well, you can do just that voting for MarylandReporter.com as the “most informative” website in the Baltimore Sun’s annual Mobbies contest. This is essentially an audience building tool for the Sun, but we actually won in 2013. No idea who nominated us this time, or who left off one of our potential competitors. The Sun folks can’t even tell us yet when the voting will end. Sounds like an ideal contest for 2016, don’t you think? Let’s show ’em who can stuff the ballot box. Vote here. Early and often.

SANDERS AT HOPKINS: Several hundred people have reserved seats for a free Johns Hopkins University symposium Thursday evening with former presidential candidate Sen. Bernie Sanders. The symposium and overflow rooms have reached capacity and organizers are no longer accepting reservations, a Hopkins spokeswoman said Tuesday afternoon, according to Tim Prudente of the Sun.

MINIMUM WAGE HIKE DELAY: Providers of services to the developmentally disabled in Prince George’s County will not have to pay the county’s minimum wage to its employees under a new law approved by the County Council, writes Bryan Sears for the Daily Record. The amended bill allows employers to pay under the minimum wage in order to give the state wages a chance to catch up with a higher one set in Prince George’s County.