Candidates for president haven’t held a public rally in Maryland since before the April primary — until Sunday, when the Green Party nominees for both president and vice president on Tuesday’s ballot spent the afternoon in College Park.

They weren’t even hoping to win the election, like the major party candidates frantically jetting into battleground states. Jill Stein and Ajamu Baraka hope to get 5% or more of the vote across the country, which would qualify the Green nominees for federal campaign financing in future elections. It will also give them automatic ballot access in some states. (In Maryland, they need only 1% to retain their ballot status.)

The Greens are reluctant to embrace the socialist label, but Sunday’s rally at the University of Maryland College Park in the Stamp Student Union was sponsored by the campus chapter of the International Socialist Organization. This student sponsorship allowed the Green candidates to use the hall attended by over 500 enthusiastic people, but only half filling the 1,100 seat ballroom.

“Tuesday may be the end of the election, but it is just the beginning of the Green revolution,” said Nancy Wallace, running in the 8th Congressional District against Democrat Jamie Raskin, Republican Dan Cox and Libertarian Jasen Wunder.

Dr. Margaret Flowers, the Green Senate nominee, said the “lesser-evil voting that has been going on for decades” needed to stop because there were real alternatives on the ballot. 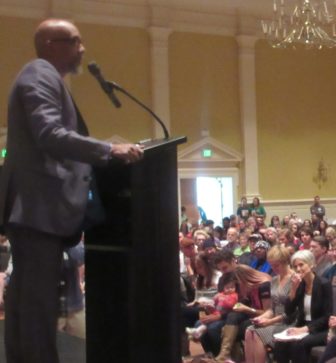 Ali McCracken, 27, a national coordinator for CodePink, a women’s anti-war organization, gave an equally fiery speech decrying the U.S. wars that have been going on for half her life.

“War has become completely normalized for my generation,” McCracken said. She attacked the $3.8 billion in aid to Israel, and said, “We will no longer fund Israeli war crimes.”

Veep candidate Baraka echoed those remarks. “To vote for Hillary Clinton is to vote for war,” Baraka said. He described himself as a “proud revolutionary” with a lifelong commitment of 45 years to the cause.

But the crowd got really fired up to hear Jill Stein, a Massachusetts physician running for the second time as the Green Party nominee.

Not going away despite media white-out 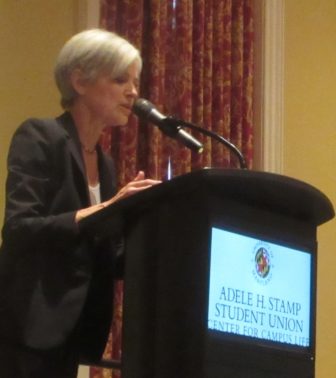 “We’re not going away,” said Stein, despite “the media white-out that is going on.”

Stein and Baraka are on the ballot in 45 states, including Maryland.

With a younger audience, Stein emphasized that there the country should provide “free public higher education for everyone” and eliminate student loan debt.

“If they can bail out Wall Street, it’s time to bail out the victims of Wall Street,” Stein said. “We need to liberate you.”

Media beware: Government is coming to your rescue