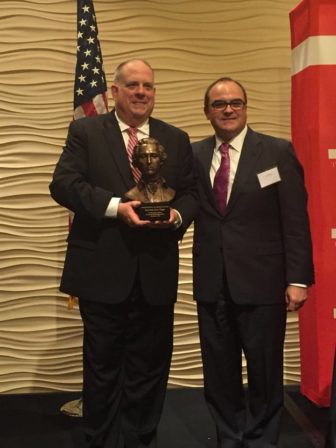 In a short speech, Hogan gave the institute some credit for his path to the governorship.

“For a long time, I’ve been passionately interested in the issues that the Maryland Public Policy Institute has been watching,” said Hogan, who served on the MPPI board. He said that led him to set up the advocacy group Change Maryland, which became the foundation for his campaign.

Coincidentally, Hogan noted that the victory party for his upset win took place two years ago Friday in the same Westin Hotel ballroom as the MPPI dinner.

Commerce Secretary Mike Gill gave the keynote address, promising that Maryland was going to become known as “the best state in the country for customer service.”

Gill, a pumped up cheerleader in suit and tie, also promised “in the next two years we’re going to bring a new Fortune 500 company” to Maryland, at the same time Kevin Plank’s Under Armour is on track to become a Fortune 500 company.

Gill also said that he expected to see Baltimore back on the cover of Time magazine in two years, not for riots as it was last year, but with the headline: “The Renaissance of Baltimore.”

Christopher Summers, founder of the Maryland Public Policy Institute, said it would launch two new programs next year. One would be the Center for Business and Economic Competitiveness to foster greater economic freedom in Maryland. The second would be a revival of the Maryland Business Climate Survey in partnership with the University of Baltimore.