FBI HQ DECISION DELAYED TILL 2017: Officials in Virginia and Maryland who have been competing for years to land a new headquarters for the Federal Bureau of Investigation will have to wait a few more months to find out which state has the winning pitch, reports John Fritze for the Sun. The General Services Administration said Monday it will delay selecting a site for the headquarters until March. The agency initially planned to choose between the three sites in play — two in Maryland and one in Virginia — by the end of the year.

HOGAN WANTS HOWARD TUNNEL EXPANDED: Gov. Larry Hogan promised Monday to find a way to expand the more than century-old Howard Street Tunnel underneath Baltimore, a “transformative” project he said could spur an almost limitless production increase at the port, reports Erin Cox for the Sun. After touring what he called the “infamous” tunnel that bottlenecks freight coming out of the port of Baltimore, Hogan predicted the federal government would help pay the $425 million price tag to make it deeper.

MGM HIRING RECORD: According to a Post story in the Daily Record, since the casino giant MGM received Maryland’s sixth and final gaming license, it has paid local companies $236 million for work related to the facility’s construction, meeting or exceeding goals set in a 2014 community benefits agreement with Prince George’s, according to its most recent quarterly report. The report, verified by the county and an independent auditor, paints a glowing portrait of MGM’s hiring and contracting practices in the region.

LEAD TESTING: The Green and Healthy Homes Initiative and state officials are hoping to educate parents on the need for testing their children for lead poisoning even as they look to end lead poisoning in children in five years, reports Bryan Sears for the Daily Record.

YES TO STATE BALLOT QUESTION: There is only one statewide question on the ballot this year, and you probably have heard little about it. Titled “Appointments and Special Elections for Attorney General or Comptroller,” Question 1 amounts to a bit of constitutional housekeeping and should be enacted, opines the editorial board for the Sun. 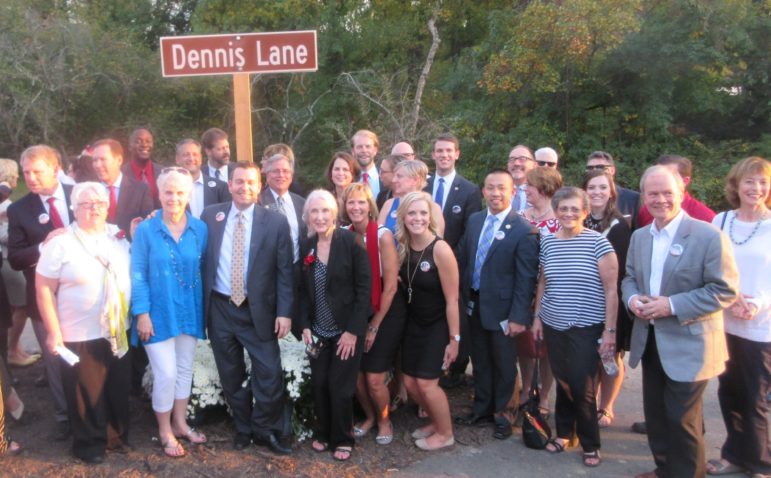 DENNIS LANE NAMED FOR DENNIS LANE: The late blogger and columnist Dennis Lane, brutally murdered three years ago, was honored last week with the naming of a road by the Merriweather Post Pavilion in Columbia. Lane, known for his wit, would have been amused and honored by a road near the Merriweather where he had his first job as a teenager and in the center of the revitalization of downtown Columbia he had championed. Above, Howard County officials and friends pose near the road sign. MarylandReporter.com photo.

FREDERICK CHARTER PROPOSALS: On Frederick County voters’ ballots this year will be three questions that could change the county’s charter and the state’s constitution. It is the first time that county voters will be asked to consider a change to the Frederick County charter, which voters passed by a wide margin in 2012, writes Danielle Gaines in the Frederick News Post.

MO CO CHARTER PROPOSALS: Montgomery County voters will be asked to approve three proposed charter amendments when they head to the polls for the November election, Doug Tallman reports for Bethesda Beat.

MARYLAND DONATES TO TRUMP, CLINTON: If the results of the election were simply based on fundraising, Democrat Hillary Clinton would win by a massive margin in Maryland, Jonathan Munshaw reports for the BBJ. Clinton is out-fundraising her opponent, Republican Donald Trump, at a 13-to-1 rate in the state.

MEDIA DEATH SPIRAL: In a column for MarylandReporter.com, Michael Collins writes that mainstream media may be in a death spiral of its own making. Many of today’s national journalists are people of privilege—denizens of Manhattan and Georgetown—with pedigrees from elite journalism schools. Rather than reporting the news and trusting people to form their own opinions, too many of today’s journalists have taken it upon themselves to tell people what to think.

FORMER DEL. HESS, 86, DIES: W. Dale Hess, a Harford County businessman who rose to majority floor leader in the Maryland House of Delegates and was later convicted — then cleared — of charges in a federal political probe during the Gov. Marvin Mandel administration, writes Jacques Kelly for the Sun. He was 86.