3 Senate candidates together for first forum and maybe last time

They are equal on the November ballot, but the three candidates for U.S. Senate sat together on the same stage for the first and possibly last time Saturday at a forum in Columbia sponsored by an African American coalition.

Szeliga has charged Van Hollen with avoiding debates — they had their first head-to-head encounter on WAMU radio the day before. Flowers has struggled to be even included in candidate forums, polling at 5% in the most recent Washington Post poll

The audience at black St. John the Baptist church in liberal Columbia was not a friendly venue for Szeliga. More than half the crowd of about 150 sported Van Hollen stickers and cheered the seven-term congressman from Montgomery County.

Van Hollen didn’t even respond to Szeliga’s attempt to get him to agree to more broadcast debates. He said they already had done one and were scheduled for a Baltimore TV debate. But he did say he’s “made it clear” that he wants Flowers included.

Flowers and Szeliga said they had both agreed to a WBFF Fox 45 debate, and that the station may air it without Van Hollen. That could not be confirmed. 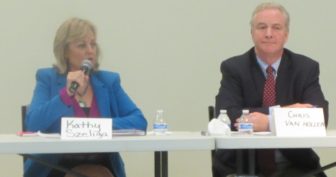 Sparring but no back-and-forth

Szeliga (sha-LAY-ga) and Van Hollen sparred over their records, while Flower emphasized progressive ideas attacking Wall Street, police conduct and climate change. The forum format did not allow for real back and forth between the candidates after they responded to a series of questions directed at all three.

“I think Washington is broken,” said Szeliga, calling Van Hollen a career politician who is part of the problem. Szeliga, who represents parts of Baltimore and Harford counties, emphasized her background as co-owner with her husband of a small construction company, as a mother and a grandmother.

Asked about jobs, Van Hollen said that Congress needed to “end tax incentives that encourage jobs to move overseas,” and attacked Szeliga for her legislative votes against raising the minimum wage.

Szeliga said after dropping out of college and eloping, she had worked a number of minimum wage jobs as a dishwasher, parking lot attendant, maid and “picking up trash on the side of the road” — the kind of entry level jobs the minimum wage is designed for.

“I wanted a career, I wanted an opportunity,” she said, not a minimum wage job.

She said the U.S. needed to stop emphasizing only college as a path to a career. “We need plumbers, carpenters, truck drivers.” 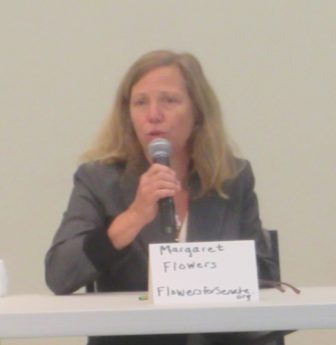 Responding to a question about Wells Fargo bank, Flowers said the government needed to hold Wall Street more accountable and “rein in this fraudulent behavior.” Millions of Wells Fargo customers had been signed up for accounts and credit cards they hadn’t requested.

“No one has been fired” at Wells Fargo for this, Szeliga complained. Van Hollen “wanted to bail out the banks” during the 2008 financial crisis. She said, “the whole system hasn’t improved.”

She pointed to Van Hollen’s low ratings from business groups, including 20% rating from the National Association of Manufacturers, and zero from the National Federal of Independent Business (a group that has endorsed her.)

“I actually supported the Wall Street reform legislation,” Van Hollen said, he supported TARP “not to save the banks, but to keep the whole economy from collapsing.”

Van Hollen said that the Republicans in Congress are trying to “eliminate the Wall Street referees.”

Flowers maintained that “we didn’t have to bail out the banks,” but need to force “Wall Street to do the right thing.”

Asked what the candidates would do to about “the racial hatred network” seen in this national campaign, Van Hollen said, “We’re going to have to do a lot of repair work” due to the divisive statements by Donald Trump.

“This is somebody that would be an embarrassment … This man is unfit to be president,” Van Hollen said. He criticized Szeliga again for saying she would vote for Trump even though she has repudiated his statements, as she did about his comments about women on Friday.

Szeliga said that everyone recognizes the racial divide in the country, but people also had First Amendment rights to say what they wanted, which brought boos from the audience.

“I think everybody recognizes that racism is inherent in our culture,” Flowers said, and “neo-liberal policies have worsened the wealth divide.”

Only Green Party presidential nominee Jill Stein is calling for reparations due to the impact of slavery and discrimination, Flowers said.

Asked about mass incarceration, Szeliga pointed to her support of the Justice Reinvestment Act in Annapolis this past session designed to reduce prison stays and teach trade and job skills to ease reentry into society.

Flowers said, “The drug war has failed and we have to treat the drug problem as a medical problem.” She said the country should “deemphasize the police from going after nuisance crimes.”

Van Hollen noted that the United States has 5% of the world population, but 25% of the world’s prison inmates. “We need to change that” and “make sure we reform our laws to focus on violent crimes and not nonviolent substance abuse.”

(None of the candidates pointed out that policing was largely handled at the state and local level, not by Congress.)

Van Hollen took a swipe at Szeliga’s vote not to decriminalize marijuana, taking advantage of the forum format, which did not provide for any response time from an opponent.

In a rare moment of agreement on the question of gun violence, both Van Hollen and Szeliga said they supported universal criminal background tests for gun purchases, which already happens under Maryland law.

But the states are not reporting crimes and mental health confinement as they should, Szeliga said, and “too often this issue [of guns] is used to raise money on both sides of the aisles.” Judges and prosecutors are not sufficiently using laws already on the books to go after gun offenses, she said.

Van Hollen pointed out that Szeliga had received a contribution from the National Rifle Association.

Flowers favors a gun buy-back program to get weapons off the streets.

Szeliga used a question about gay rights to point out that politics has long been a male dominated field and that Democrats chose not to nominate a women for Senate — Van Hollen defeated Rep. Donna Edwards in the primary. Depending on the outcome of the Senate race, she said this may be the first time Maryland has not had a woman in the congressional delegation since 1972.

(Republican Amie Hoeber running against Rep. John Delaney in the 6th Congressional District is the only other woman running for Congress in November.)

Van Hollen paried by noting that Maryland was one of the first states to pass same-sex marriage, and “you were fighting strongly against marriage equality,” he said to Szeliga.

On a question about use of force in the Syrian civil war, Van Hollen said, “We’re safer today than we were when [Obama] was elected,” but Szeliga and Flowers disagreed.

Szeliga used the question to criticize the Department of Veterans Affairs, and Flowers said that the United States, with “the largest empire in the history of the world,” needed to respect national sovereignty and international law.

Asked about police accountability, Flowers said there needed to be major revisions in the law enforcement officer bill of right so that police don’t have more rights than citizens. “We need to demilitarize our police,” she said. “We need an independent review of all police bullying” and de-escalation training for police in confrontations.

In a closing statement, Flowers said the nation needed to make health care a right, and pass “Medicare for all,” a single-payer system for health care covering everyone.