2-YEAR DROP IN STATE REVENUES EXPECTED: Maryland tax revenues are expected to be down $365 million this fiscal year and another $418 million in fiscal 2018, a $783 million drop in what the state can spend, eating up all this year’s projected budget surplus, writes Len Lazarick for MarylandReporter.com. The estimate revision is the largest projected write-down since 2010, when the state was in the midst of recession recovery and the panel was off by 5%.

TAX REVENUES GO TO WRONG TOWNS: The office of Maryland Comptroller Peter Franchot distributed $8.7 million in tax revenues to the wrong towns in Montgomery County, state auditors say in a report to be released on Thursday. Auditors blame the mistake on the erroneous classification of more than 14,000 returns. Auditors also found problems with how the office handles out-of-state tax credits, keeps information secure, and issues replacement refund checks, Luke Broadwater and Michael Dresser of the Sun report. [The Sun “obtained’ the audit before its official public release Thursday; members of the Joint Audit Committee get the reports a week in advance.]

STATE CENTER TALKS CONTINUE: Adam Bednar of the Daily Record writes that negotiations continue nearly two months after the developer of the proposed $1.5 billion State Center redevelopment and the state of Maryland started a mediation process expected to take 30 days. State Center LLC and the state, the proposed development’s largest tenant, remain in mediation with the goal of keeping their dispute out of court. The developer previously said they’ll end up “in litigation immediately” if mediation isn’t “fruitful, focused and sincere.” 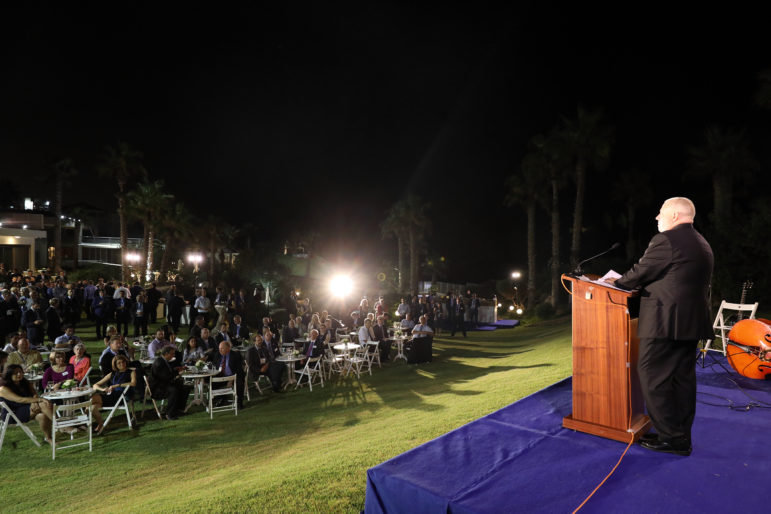 Gov. Larry Hogan addresses those attending a reception at the U.S. Embassy in Tel Aviv, Israel. Photo by Governor’s Office.

HOGAN’S ISRAELI MISSION: Days into a week-long trade mission to Israel, Gov. Larry Hogan has met with Israeli business executives who have a subsidiary in Maryland; addressed a group of high-tech entrepreneurs; and joined University of Maryland officials for the signing of an academic agreement with the University of Tel Aviv, writes Ovetta Wiggins of the Post.

TERM LIMITS OK’d FOR BALLOT: A Montgomery County Circuit Court judge ruled Wednesday that a charter amendment establishing term limits could go before voters in November, reports Bill Turque in the Post. Republican activist Robin Ficker collected more than 17,000 signatures — more than the 10,000 required — for a measure to limit the county executive and members of the county council to three terms. A group headed by Tom Moore, a Democrat, challenged the validity of the signatures on a series of technical grounds

AC PROBE: Comptroller Peter Franchot and the NAACP are asking the U.S. Department of Justice to investigate the lack of air conditioning in public schools in Baltimore city and Baltimore County, Erica Green and Pamela Wood report in the Sun.