RX POT SUIT: Until he was released from the Baltimore Ravens this year, Eugene Monroe was the NFL’s foremost advocate for allowing players to use medical marijuana. Now he’s a partner in a company suing Maryland regulators for rejecting its application to grow the drug. Fenit Nirappil of the Post writes GTI officials said they don’t want their lawsuit to further delay the long-beleaguered program.

HOGAN AIDE PUSHES BACK: Ovetta Wiggins of the Post reports that a top aide to Gov. Larry Hogan has accused House Speaker Michael Busch of trying to pressure Attorney General Brian Frosh to rule that Hogan’s order to start the school year after Labor Day was illegal. Within days after Hogan (R) issued his Aug. 31 executive order, Busch (D-Anne Arundel) called Frosh to discuss how long it would take for the attorney general’s office to review the order and opine on whether Hogan overreached.

AC IN BALTIMORE, BA CO SCHOOLS: Comptroller Peter Franchot and Gerald Stansbury, the president of the Maryland State Conference of the NAACP, have asked the U.S Department of Justice to investigate Baltimore County and Baltimore City for failing to install air conditioning in all of its schools. Franchot speaks with Robert Lang of WBAL-AM on the issue.

EXELON UTILITIES SEEK RATE HIKES: In less than a year, three Exelon-owned power companies have filed petitions with the Public Service Commission of Maryland to raise the price of electric bills, Katishi Maake of CNS reports in MarylandReporter.com.  After BGE’s rate hike was granted in June, Delmarva Power and Pepco now seek to raise their prices, citing millions of dollars invested into improving their electric systems and services during the past few years. But, many, including Montgomery County Council member Roger Berliner, said they believe these rate hikes are unwarranted and will disproportionately affect lower-income residents already struggling to pay bills.

YOUTH SERVICES CUTS: State officials said they opted to ignore budget language and only fund some youth services based on programs that had measurable outcomes instead of continuing a decades-old approach, Bryan Sears reports for the Daily Record. The change resulted in two Youth Services Bureaus, both in Baltimore County, not being funded. The decision by the Governor’s Office of Children touched off a firestorm of legislative criticism and resulted in a hearing Tuesday before the House Appropriations and Senate Budget and Taxation Committees.

LOTTERY CONTRACT LOSERS PROTEST: Two losing contenders for a contract worth as much as $263 million for the computer network that runs the Maryland lottery are protesting a decision to award the business to a rival, charging that a state agency chose the highest bidder after a tainted process, Michael Dresser of the Sun reports.

PLANK SEEKS STATE, FED FUNDS: Kevin Plank’s plan to remake Baltimore City’s Port Covington took a big step forward when the City Council approved $660 million in public financing for the project, but the Under Armour CEO still needs millions in state and federal funding to make his dream a reality. Plank’s Sagamore Development Co. is now attempting to win approval of about $350 million in state funding and $225 million in federal funding, Luke Broadwater reports for the Sun. 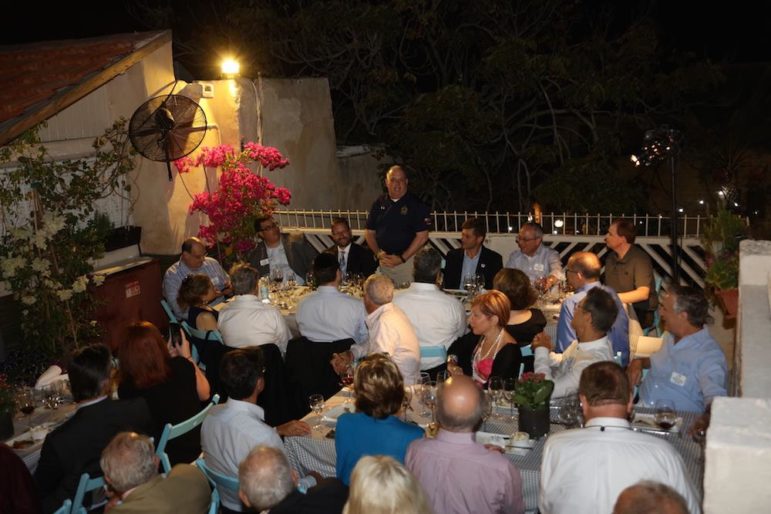 At a roof-top dinner in Tel Aviv, Gov. Larry Hogan addresses a group of Israelis and Marylanders as part of a trade mission. From Hogan’s Facebook page.

HOGAN IN ISRAEL: Gov. Larry Hogan is on a weeklong trade mission to Israel, during which the Republican hopes to persuade cybersecurity and life-science companies to open offices in Maryland, the Sun reports. Hogan and about 35 business leaders, academics and state officials plan to visit Beersheva, Tel Aviv and Jerusalem. The article is topped by a WJZ-TV report on the mission by Pat Warren.

HOGAN TO BE GARRETT PARADE GRAND MARSHAL: Gov. Larry Hogan will be the grand marshal of Garrett County’s 49th annual Autumn Glory Festival Grand Feature Parade on Oct. 15, Elaine Blaisdell of the Cumberland Times News reports. “We are elated to have Gov. Hogan serve as the grand marshal,” said Nicole Christian, president and CEO of the Garrett County Chamber of Commerce. “Selecting him as the grand marshal is an opportunity for the chamber to recognize his achievements and to thank him for his efforts.”

HOEBER VS. DELANEY: Voters attending the first candidate forum of the general election for the District 6 congressional seat Monday evening were treated to a kinder, gentler side of a contest that has become increasingly acrimonious in recent weeks, reports Louis Peck for Bethesda Beat. Republican challenger Amie Hoeber of Potomac, who earlier this month published an op-ed accusing Democratic Rep. John Delaney of making a personal fortune “by handing out predatory loans,” avoided direct attacks on the incumbent during the session at Shaare Torah Synagogue in Gaithersburg.

GOLD ISN’T CHEAP: CNS’s Jake Eisenberg, Camille Chrysostom and Julz Harvey report in MarylandReporter.com that athletes from Maryland – including Michael Phelps (Towson) and Katie Ledecky (Bethesda) – dominated at the 2016 Rio Olympics, bringing home 16 gold medals. Why did so many Olympic stars hail from Maryland? It might be because Maryland is one of the nation’s wealthiest states. And training for the Olympics is not cheap.

GENE RAYNOR, 80, DIES: Gene Michael Raynor, a retired top city and state election administrator recalled as an old-fashioned political strategist, died of heart disease Saturday at Union Memorial Hospital. He was 80. “It’s hard to imagine an election in Baltimore without Gene Raynor,” said Maryland Sen. Barbara A. Mikulski. “From the time he was a young man working as a clerk to being chief of Maryland’s election board, Gene was a fixture and a font of information on all things Maryland elections.”

CITY MINIMUM WAGE: A Baltimore City Council committee plans to vote today on amendments to a proposal to raise Baltimore’s minimum wage to $15 an hour — part of an effort to try to pass the legislation before year’s end, Luke Broadwater for the Sun writes.

KKT SAYS BUSH TO VOTE FOR CLINTON: Former Lt. Gov. Kathleen Kennedy Townsend said in a social media post on Monday that former President George H.W. Bush told her he is planning to break with his party to support Democrat Hillary Clinton in November, John Fritze reports for the Sun.