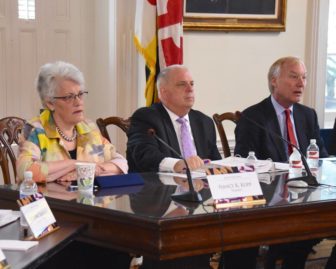 HOGAN TO LEAD ISRAEL TRADE MISSION: Gov. Larry Hogan will lead a trade mission to Israel this month in hopes of luring cybersecurity and life-science companies to open offices in Maryland, Erin Cox of the Sun writes.

CONTRACT AWARD DEFERRED: A divided Board of Public Works voted Wednesday to defer for two months a vote to award a new contract for health services for state employees so the losing bidder, a 15-year incumbent, could mount an appeal, Bryan Sears writes for the Daily Record.

HOGAN BRIDGE ACTION CORRECT: Del. Trent Kittleman, in an op-ed for MarylandReporter.com, writes that once again, Gov. Larry Hogan is doing the responsible thing by proceeding with a Phase I Environmental Impact Study to expand or replace the Chesapeake Bay Bridges.  Barry Rascovar’s column Tuesday took issue with the governor’s decision.  It was difficult, however, to take Mr. Rascovar seriously with comments such as arguing that no expansion of the bridge is needed. He suggests that “by the time a third crossing opens for vehicles much of Ocean City’s beach could be under water.”

FORUM ON DOJ REPORT: Rep. Elijah E. Cummings said Wednesday that the Justice Department report on the Baltimore Police Department, and the reforms now being negotiated by federal officials and the city, provide a rare opportunity to address some of the city’s most challenging problems. “I don’t want my children’s children’s children to have to fight the same fights,” the Baltimore Democrat told the more than 200 who crowded Westminster Hall to discuss the report, Jessica Anderson of the Sun reports.

STUDENT CHASTISES POLS: The president of a student government group responded Wednesday to debate over the Anne Arundel County school system’s new transgender guidelines, saying those who oppose the directives are uninformed and motivated by fear. The guidelines, sent out to principals and senior staff last month, state that students should be allowed to use the bathrooms and locker rooms of their gender identity. Last week, County Executive Steve Schuh asked the county Board of Education to reconsider the guidelines, Cindy Huang and Amanda Yeager report for the Annapolis Capital.

DELANEY-HOEBER RACE: Louis Peck of Bethesda Beat writes that notwithstanding significant differences on many of the issues central to the 2016 campaign, the two major party candidates in Maryland’s most competitive congressional election this fall share similarities in terms of their respective backgrounds. Democratic Rep. John Delaney, who has represented the 6th District for the past four years, and Republican challenger Amie Hoeber, are residents of the same Potomac neighborhood.

NBC FORUM WEIGHTED FOR TRUMP: Wednesday night’s NBC Matt Lauer-moderated hour-long “forum” between presidential candidates Hillary Clinton and Donald Trump was unique in the annals of presidential debates: Each was asked one half-hour of questions by a moderator and audience without interacting with each other. That led to another uniqueness: the first network presidential debate ever that was weighted in favor of the Republican nominee, writes Professor Richard Vatz in an op-ed for MarylandReporter.com.

ROBERT TIMBERG, SUN STATE HOUSE REPORTER, DIES: Robert R. Timberg, a former Baltimore Sun reporter and Marine whose 1995 book “The Nightingale’s Song,” about five Naval Academy graduates who served in the Vietnam War, earned him wide acclaim, died Tuesday of respiratory failure at Anne Arundel Medical Center, reports Fred Rasmussen for the Sun. The Annapolis resident was 76. Bob Timberg was a genuine American hero who continues to inspire me every day,” said Sen. John McCain of Arizona, whose experiences in Vietnam were detailed in “The Nightingale’s Song.”