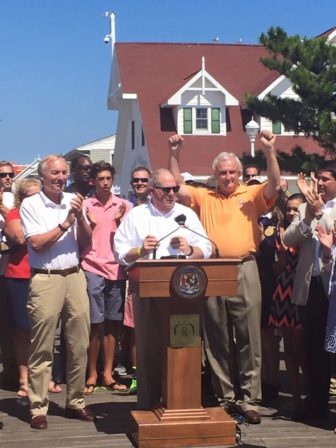 SCHOOL START CHANGE DUSTUP: Gov. Larry Hogan has ordered public schools in the state to extend summer recess until after Labor Day beginning in 2017, setting off an immediate battle with school officials and Democratic legislative leaders, reports Josh Hicks for the Washington Post.

24 OF 26 ON FUNDING PANEL NAMED: All but two of the 26 members on the new commission on school funding have now been named, and it will hold its first meeting Sept. 29, reports MarylandReporter.com. Former University System Chancellor Brit Kirwan was named chair last month in an unusual joint appointment by the governor, Senate president and House speaker.

2 HIRED IN STATE SUPER’S OFFICE: Carol Williamson, the former superintendent of Queen Anne’s County Public Schools, has been hired as Maryland’s deputy state superintendent for teaching and learning. And Sylvia Lawson to be deputy superintendent for school effectiveness, Liz Bowie reports in the Sun.

MD HIGH COURT SESSION STARTS: Steve Lash of the Daily Record reports that Maryland’s top court begins its 2016-2017 term today with a new judge and cases addressing the constitutionality of state restrictions on vanity license plates, the deference appellate courts owe to trial judges in suppressing evidence and whether a decade-old, criminal-law precedent should be overturned.

STATE GETS $800,000 FOR OYSTER REHAB: The National Oceanic and Atmospheric Administration has awarded $800,000 to Maryland to help restore the Chesapeake Bay’s oyster population, according to an AP story in the Daily Record.

PG OFFERS DOWNSIZED HOSPITAL PLAN: Officials in Prince George’s County have submitted a modified proposal for a new regional medical center that reduces the size and cost of the project. But it remains unclear whether the changes are enough to satisfy state regulators and win the long-sought Certificate of Need that is required to move forward, Arelis Hernandez of the Post reports.

IN PRAISE OF HOGAN: Annapolis Mayor Mike Pantelidis praises Gov. Larry Hogan for a $345,147 public safety grant the city won from the state, writing in the Annapolis Capital that, “While the money will address overtime costs and fund additional security cameras, this grant is really about a Maryland governor who is aware, concerned and quick to respond when he identifies a critical need across the state. I want to acknowledge Gov. Larry Hogan for his keen understanding of what it takes to protect our community and applaud his leadership by securing necessary funding for Maryland’s capital city.”

PUGH LEADS IN MONEY RACE: Sen. Catherine E. Pugh, the Democratic nominee for mayor, has nearly 100 times more campaign cash on hand than her general election rivals, writes Luke Broadwater for the Sun. Pugh has $280,670 in her campaign account, according to finance filings due Tuesday at the State Board of Elections. Republican nominee Alan Walden has $2,983 on hand, according to his latest filing. Green Party candidate Joshua Harris in April filed an affidavit stating he did not plan to raise or spend more than $1,000 in the filing period.