KIRWAN GETS BI-PARTISAN NOD: In an unusual joint announcement of a highly unusual joint appointment, Republican Gov. Larry Hogan and the Democratic leaders of the legislature Tuesday named former university system chancellor Brit Kirwan as chair of a commission to review all the hotly contested school funding issues in Maryland, writes Len Lazarick for MarylandReporter.com.

STRUGGLING WITH TRANSIT PROJECT REPORTS: Officials in Prince George’s County are blasting a demand by the administration of Gov. Larry Hogan (R) that the county submit detailed studies on its preferred transportation projects to be eligible for state funding. Baltimore County officials have raised similar concerns, saying the state is responsible for many of these studies and is not giving local governments enough time to produce the requested information, reports Fenit Nirappil and Arelis R. Hernández for the Post.

HOGAN SEEKS SBA DISASTER AID: Gov. Larry Hogan asked the federal Small Business Administration Tuesday to declare a disaster in Howard County as a result of the flash flooding that struck Ellicott City July 30. Michael Dresser of the Sun writes that such a declaration would clear the way for businesses, homeowners and renters damage to apply for low-interest loans to repair damages caused by the destructive flood, which killed two people. 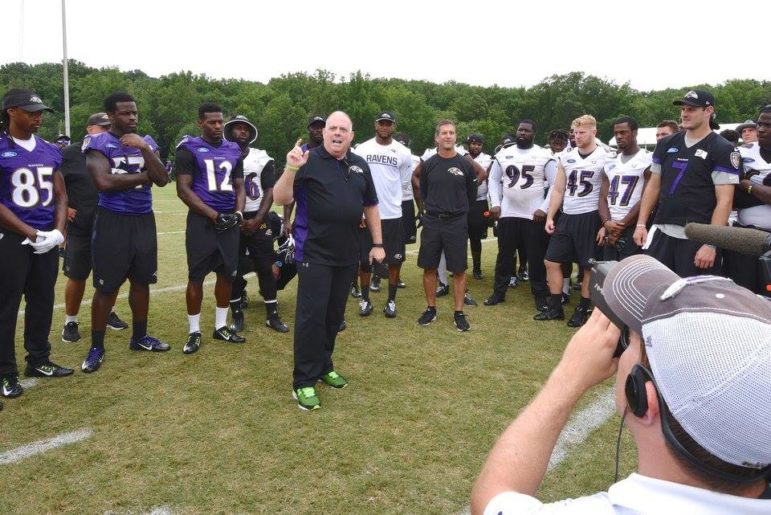 Gov. Larry Hogan gave a pep talk at the Baltimore Ravens training camp, captured on video for his Facebook page.

SPRAYING FOR ZIKA: Residents of a Frederick neighborhood are unsure why the state chose to spray mosquito-killing pesticides over their yards last week. “The target is the Asian tiger mosquito,” said Brian Prendergast, program manager for the Mosquito Control Administration under the Maryland Department of Agriculture, Sylvia Carignan writes in the Frederick News Post.

BIKING TO OVERTURN HOGAN VETOES: The journey to overturn one of Gov. Larry Hogan’s vetoes will begin with a single push of a bike pedal. Vinny DeMarco, an avid bike rider and  progressive lobbyist who has promoted laws imposing stricter licensing procedures for handguns and increased taxes on cigarettes and alcohol, will cycle 341 miles across the state with his son to draw attention to the effort to override a veto of a bill meant to increase the amount of electricity that must be generated in Maryland using wind and solar sources, reports Bryan Sears in the Daily Record.

PART 2 ON COLUMBIA: In Part 2 of his series on the 50th anniversary of the juggernaut town of Columbia, Len Lazarick looks at the history of buying and selling real estate in the this town that Rouse and Ryland built out of farmland and how the economy affected its downtown and other business centers.

CITY MINIMUM WAGE: Supporters and opponents of increasing Baltimore’s minimum wage to $15 an hour are scrambling to line up votes less than a week before the City Council is scheduled to make a final decision on the proposal, reports Yvonne Wenger for the Sun.

‘EXTREMIST GROUP’ SAYS IT HELPED PETITION: Robin Ficker was quite clear after he delivered petitions for a term-limits ballot question to Montgomery County officials on Monday: he had no assistance from Help Save Maryland, an organization that has been designated a “nativist extremist” group by the Southern Poverty Law Center, the Alabama-based non-profit that monitors extremist political activity. But, reports Bill Turque in the Post, Brad Botwin, executive director of Help Save Maryland, said Tuesday that he collected “hundreds and hundreds of signatures, if not more than that.”

BUCKS FOR ARUNDEL’S HEROIN PROBLEM: Anne Arundel County and Annapolis police will receive about $704,000 combined for initiatives aimed at combating the state’s heroin epidemic, Megan Brockett reports in the Annapolis Capital. The money is part of $3 million in grants the state is sending to jurisdictions around Maryland in an effort to eradicate the epidemic. The bulk of the money will pay for the continuation of the Safe Streets Initiative, an “offender-based program” focused on the most serious, violent and repeat offenders.

FEWER TESTS FOR WA CO TOTS: Julie Greene of the Hagerstown Herald Mail writes that Washington County Public Schools will conduct state Kindergarten Readiness Assessments for a sampling of students this school year, rather than every kindergartner as in years past. But every kindergarten student will still go through local assessments that help teachers know their skill levels, including reading, so teachers can make adjustments quickly, Chief Academic Officer Peggy Pugh said Tuesday.