FEDERAL AID SOUGHT FOR ELLICOTT CITY: Officials are seeking federal assistance to help residents and businesses whose property was lost or damaged in the flood that ravaged historic Ellicott City on Saturday, and scheduled an information session Monday afternoon at which locals can learn how to apply for recovery relief, Jesse Coburn reports in the Sun. 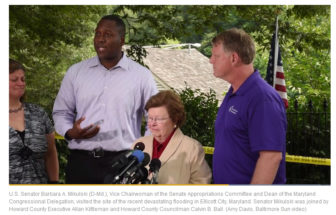 A screenshot from a Baltimore Sun video of Calvin Ball, Barbara Mikulski and Allan Kittleman in Ellicott City.

ROSAPEPE EYES CLIMATE CHANGE CAUSE: State Sen. James Rosapepe suggested Monday that climate change could be to blame for the flash-flood that killed two people and destroyed much of historic Ellicott City Saturday night. “The deaths and damage caused by this weekend’s flash flood in Ellicott City, as well as the damage caused elsewhere, reminds us that climate change is about more than polar bears and the rising sea level in the Chesapeake Bay,” said Rosapepe, co-chair of a key environmental subcommittee in the Maryland Senate, Erin Cox reports for the Sun.

FLOOD FORCES RX POT PANEL MOVE: Last weekend’s flooding of Ellicott City has forced the Medical Cannabis Commission to move its much-anticipated Friday meeting from Ellicott City to Baltimore, writes Erin Cox in the Sun. The commission is scheduled to select the top applicants to launch Maryland’s medical marijuana industry, but that decision will now take place at the University of Maryland School of Medicine instead of Howard County office buildings.

ATTY GEN APPEALS SYED RULING: The Maryland Attorney General’s Office on Monday formally appealed a ruling that overturned the conviction of “Serial” podcast subject Adnan Syed, arguing that a judge wrongly allowed new arguments over cell phone evidence, Justin Fenton of the Sun is reporting. The Attorney General’s Office, which has been fighting Syed’s appeal, said that his latest post-conviction hearing had been convened to hear from an alibi witness who said she was with Syed during a time when prosecutors originally argued he was killing ex-girlfriend Hae Min Lee.

FIGHT HB1013: In a column for MarylandReporter,com, Michael Collins writes that Gov. Hogan has received heavy criticism over his decision to cancel the Red Line light rail planned for Baltimore.  In reaction, Democrats in the legislature passed HB1013 — over Hogan’s veto — to force the governor to fund their priorities. Some critics say Hogan should just go along with it.  But that is wrong — Hogan should fight the spirit and letter of HB1013 tooth and nail.

***SEEKING ASSESSMENT ADMINISTRATORS: Seeking motivated individuals to proctor assessment sessions with 4th- and 8th-grade students in schools for the National Assessment of Educational Progress. Must be available to work January 30 –March 10, 2017. Paid training, paid time and mileage reimbursement for local driving, and weekly paychecks. This is a part-time, temporary position. To apply, visit our website at www.westat.com/CAREERS and select “Search Field Positions.” Search for your state, find the NAEP Assessment Administrator position, and select the “apply to job” button. For more information email NAEPrecruit@westat.com or call 1-888-237-8036.***

KLINE ON KURTZ: Greg Kline of Red Maryland disputes Josh Kurtz’s Center Maryland column from last week in which Kurtz  argues that the true leader of the Maryland Republican Party is our newly elected national committeeman David Bossie, who helped bring about the Citizens United ruling. “Just like his previous efforts to define the “rising stars” of the MDGOP he gets it so very wrong,” Kline writes.

COMMISH JOINS ED BOARD: Allegany County Commissioner Bill Valentine will serve on the state Commission on Innovation and Excellence in Education, a 25-member group working to reform the educational funding system, Heather Wolford reports for the Cumberland Times-News.  The commission is the result of SB 905, legislation sponsored by Sen. Nancy King, education subcommittee chair of the Senate Budget and Taxation Committee, and signed into law by Gov. Larry Hogan.

OYSTER IMPROVEMENT: Maryland’s ravaged Chesapeake Bay oyster population shows signs of revival inside the state-created sanctuaries that have been off-limits to harvesting for the past decade, according to a report from the Department of Natural Resources. Oysters in many of the protected areas are larger and more abundant and show a greater ability to reproduce. The bivalves also give signs that they may eventually regain their critical environmental role of consuming algae and filtering certain pollutants from bay waters, writes Bill Turque for the Post.

ANTI-BIAS RENTAL BILL REJECTED: The Baltimore County Council rejected a bill Monday that would have made it illegal for landlords to discriminate against prospective tenants who use government housing vouchers to pay their rent, reports Pamela Wood in the Sun. The council was required to consider the bill as part of a settlement of a housing discrimination complaint negotiated between the county government and the U.S. Department of Housing and Urban Development. Members voted 6-1 against it.

MO CO BODY CAMS: Montgomery County police officers have been instructed to activate their body cameras any time they begin an interaction with the public that is “investigatory in nature,” police officials said Monday during a briefing with the County Council’s Public Safety Committee reports Andrew Metcalf for Bethesda Beat. Assistant Chief Luther Reynolds told the committee that approach provides officers with some discretion and enables them to decide when to record interactions.

CARROLL GOP OPPOSES CHARTER GOV’T:  The Carroll County Republican Central Committee issued a news release Saturday, voicing opposition to any effort to move the county to a charter form of government and urging members to do the same, reports Heather Norris in the Carroll County Times.

SPEAKING WITH SRB: In this long interview with Baltimore City Mayor Stephanie Rawlings-Blake, Tom Hall of WYPR-FM addresses her role at the Democratic National Convention, her decision not to run again, the Port Covington controversy and other issues.