By Andrea Cwieka and Jess Nocera

PHILADELPHIA — Maryland delegates for both Bernie Sanders and Hillary Clinton said they felt optimistic and united coming out of the Democratic National Convention that closed Thursday night.

After a nomination acceptance speech from Clinton that made her the first woman to head a major political party’s ticket, many from the Maryland delegation emerged from the balloons and confetti saying they felt uplifted.

Maryland Sen. Ben Cardin had only one word to say on Twitter: “Wow.”

“I’m overwhelmed to have witnessed history – both for what was achieved by Hillary Rodham Clinton and by the idea of what’s now possible for my 11-month-old niece, Kaylee, and for what she could want to achieve,” said Dylan Goldberg, a Maryland delegate from Columbia. 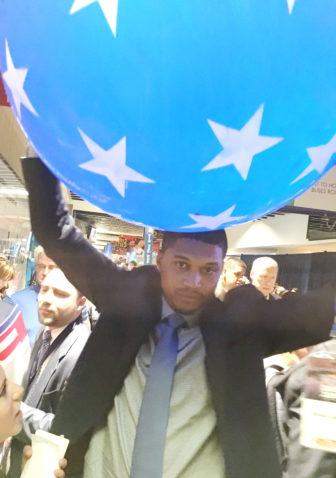 Maryland delegate Darius Baxter carries one of the huge balloons that dropped from the ceiling after Clinton’s speech. Capital News Service photo by Darius Klarner

That sentiment was shared among partisans for Clinton’s former rival.

“How the democratic process works…when someone loses is to accept it and become a team player,” said Maryland delegate Darius Baxter, a Sanders supporter from Accokeek. “I came in on Monday with an open mind and a clear heart and tonight really solidified it. ‘I Am With Her’ for now,” he said, using a Clinton campaign slogan that was frequently used in convention speeches.

Maryland delegate Sandra Falwell, a Sanders supporter from Clinton, who participated in one of the media tent sit-ins during the convention, said she felt “guardedly optimistic” and could see herself voting for the former secretary of state in November.

“Some of the Bernie people who say they just can’t vote for her are going to write in cartoon characters,” Falwell said via text message. “One person said he was going to write in his wife. This kind of action is just wasted votes.”

For Clinton supporters, Thursday night was an overwhelming finale to an emotion-filled week in Philadelphia.

The Democratic presidential nominee touched on many of Republican nominee Donald Trump’s attacks during the Republican National Convention last week and sought to refute them.  She criticized his call to build a wall along the Mexican border and castigated him for his attempts to foment fear in the American electorate.

“She defined the difference between a serious presidential candidate and Donald Trump,” said Marie Duffield, a Maryland delegate from Huntingtown.

“It was deeply moving for me because I have waited for this day many years,” said Maryland delegate Susan Esserman, a Bethesda resident. “I think she has great potential to unify the country and do the good she was talking about.”

Voters cannot waste their votes or not vote in the upcoming election, Esserman said.

“I’ve heard some great presidential candidate speeches and that had to be one of the best I’ve heard,” said Senate Majority Leader Catherine Pugh, the Democratic nominee for Baltimore mayor.