MINIMUM WAGE HIKE: When the new fiscal year begins July 1, Maryland’s minimum wage will once again increase by 50 cents, up to $8.75 per hour. Authorized by legislation under former Gov. Martin O’Malley, the state’s wage hike has been gradual, increasing from the federal rate of $7.25 to $8, and then to $8.25 last July, CJ Lovelace reports for the Hagerstown Herald Mail.

PELL GRANTS FOR PRISONERS: John Fritze of the Sun writes that about 12,000 prisoners nationwide will have access to federal Pell grants to help pay for college courses under an effort the Obama administration is pursuing despite a decades-old congressional ban on offering student financial aid to inmates. Only inmates eligible for release will be permitted to enroll in the program.

MPT AUDIT: Maryland Public Television failed to adequately protect donor financial information gathered during fundraising efforts, according to a state audit covering the years 2011 to 2015, David Zurawik reports in the Sun. The report also questioned MPT’s handling of contracts worth $8 million and its monitoring of payments to companies hired for such fundraising services as operating a call center. MPT officials challenged the findings on the way contracts were awarded and other financial and procedural matters. It did not dispute the charges that donor privacy was not properly protected but stated that confidential information was not breached.

RETIREMENT SAVINGS BOOST: A Maryland lawmaker is taking part in a discussion about state efforts to boost retirement savings. Del. Bill Frick will take part in the discussion, which is being sponsored by the Pew Charitable Trusts. Experts and lawmakers from Colorado, Indiana and Utah also are participating, according to an AP story in the Daily Record.

FRACKING RULES: Maryland will consider revising its proposed regulations for the natural gas drilling known as hydraulic fracturing in an effort to add safeguards for public health and the environment, a state agency announced Wednesday. The Maryland Department of the Environment released issue papers with tentative suggestions for revisions after an 18-month review of regulations that were initially proposed in January 2015, writes the AP’s Brian Witte in the Daily Record.

NO DEPORTATION RELIEF: Undocumented immigrants and their supporters ­reacted angrily Thursday to the U.S. Supreme Court’s failure to revive deportation relief programs for nearly 4 million people, vowing to continue to fight for legal status through the November presidential elections. Antonio Olivo and Pamela Constable of the Post speak with some of those affected in Maryland and Virginia and their advocates.

20 TERRAPINS FOUND DEAD: Officials say 20 terrapins, the official reptile of the state of Maryland, were discovered dead inside of commercial crab pots last weekend, the AP is reporting at WMAR-TV. Terrapins are land and water turtles. But, said Maryland Coastal Bays Program spokeswoman Sandi Smith, while terrapins spend a lot of time in water, they still have to breathe. 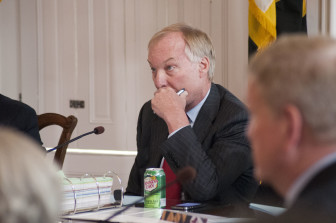 FRANCHOT RAISES WHITE FLAG: Never say Comptroller Peter Franchot doesn’t know when he’s beaten, writes Bryan Sears for the Daily Record. Franchot, who has been vocal on a number of issues during his tenure as the state’s tax collector and one of three members of the Board of Public Works, waved the proverbial white flag when it comes to one of his nemeses, Environmental Systems Research Institute, a sole-sourced company.  Franchot said, “This group apparently is indispensable to the state of Maryland. So ESRI … congratulations, somehow you have managed to become something that we cannot get rid of.”

SARBANES ON SIT-IN: Marc Steiner of WEAA-FM discusses the recent sit-in by members of Congress, an action held in the attempt to force a vote on gun control measure, with Maryland Rep. John Sarbanes (D-3rd District).

SZELIGA RUNS: John Lee of WYPR-FM reports on Kathy Szeliga as she takes on Chris Van Hollen, both seeking the U.S. Senate seat being vacated by Barbara Mikulski. On a recent evening at the Birdland Sports Bar on Belair Road, Szeliga was making her pitch to about 30 people, most of them already on board with her campaign.

FIGHT AGAINST ATTORNEY GENERAL: Five months after an administrative judge heard his case, Philip Rousseaux and his company, Everest Wealth Management Inc., face stiff penalties from the Maryland Attorney General’s Office for alleged fraud and violations of state securities law, but he remains determined to fight for his future in what could be a lengthy legal battle, Holden Wilen reports in the Baltimore Business Journal.

UNION BUSINESS, TAXPAYER DIME: Trey Kovacs and Tyler Kovacs of the libertarian Competitive Enterprise Institute, in an opinion piece in MarylandReporter.com, write that legal developments around the country should give Prince George’s County Council members pause about rubberstamping a union contract covering firefighters and paramedics. Under legal scrutiny is a provision that permits public employees to perform union business that does not serve a public purpose on the taxpayer dime.

ETHICS IN FREDERICK: A new process for taking the politics out of ethics won support from the Frederick County Council on Tuesday, but some council members had critiques.The council voted 6-1 to affirm the confirmation of Chris Glass and Ernest Heller to the Frederick County Ethics Commission, the first nominees recommended through a five-person pilot committee that Democratic County Executive Jan Gardner empowered earlier this year, with the aim of creating a more independent ethics commission. The process found some allies on the council, Danielle Gaines of the Frederick News Post reports.

POLITICAL LESSONS: Comptroller Peter Franchot praised the 200 teenagers taking part in Boys State at McDaniel College. Boys State is a program of the American Legion, which since 1935 — since 1947 in Maryland — has given teens across the country an opportunity at hands-on learning in American politics and public service, John Kelvey writes in the Carroll County Times.