): A wooden marker labeled “R.W./LOD” sits outside Wanderly Calderon’s front door, marking the right of way and “limits of disturbance,” according to the Maryland Transit Administration. The construction by her home will make way for the Purple Line light rail, which will travel in an underground tunnel before surfacing at an entrance across the street.

This is Part 3 in the series “Purple Line Divided” by the Capital News Service. The $5.6 billion Purple Line light rail project is moving ahead, but not without hardship for some residents and business owners. 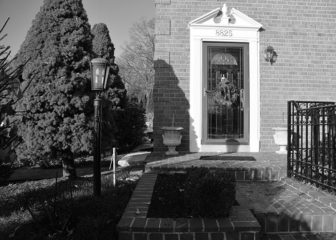 A wooden marker labeled “R.W./LOD” sits outside Wanderly Calderon’s front door, marking the right of way and “limits of disturbance,” according to the Maryland Transit Administration. The construction by her home will make way for the Purple Line light rail, which will travel in an underground tunnel before surfacing at an entrance across the street. Capital News Service photo by Brittany Britto

Wanderly Calderon first heard about the Purple Line from her neighbors three years ago, but she didn’t think it was going to directly affect her. Now, it’s going to be in her front yard.

Her townhouse, which sits on the corner of the westernmost set of Arliss Street townhomes in Silver Spring, will be one of at least 16 whose front yards will be used to make way for the Purple Line.

Construction for the 16.2-mile double-track light rail, which will run from Bethesda in Montgomery County to New Carrollton in Prince George’s County, will take place just feet away from residents’ front doors.

Calderon, 77, who has lived in her house for the past 40 years, received a letter from the Maryland Transit Administration in late 2014.

The Purple Line will travel underground in a tunnel and will surface at the new nearby station, Long Branch, which would be built across the street from Calderon’s home.

They offered her money to essentially lease her front yard for a two-year period to build the portion of the light rail that will run through the neighborhood, she said.

But the retired secretary and president of the Arliss Townhome Association has since attended meetings about the Purple Line, and it seems like the impact will be permanent. 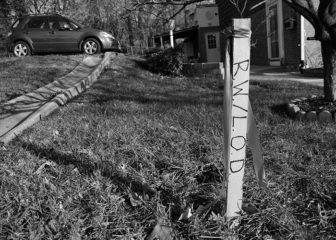 More than 10 townhomes in the Silver Spring/Long Branch area in Maryland will be affected by Purple Line construction. The Maryland Transit Administration has delivered notices to the Arliss Townhomes requesting to lease their front yards for the duration of construction for the Long Branch light rail station. Capital News Service photo by Brittany Britto

At one of the last meetings she attended, in July, transportation representatives said that the construction for the tunnel entrance of the Purple Line will take place in front of her house, possibly blocking the front side entrance of her home. Since then, a wooden stick labeled “R.W./LOD” or “Right of Way/Limits of Disturbance” with red and blue ribbons attached sits in the ground in front of her front steps as a reminder of what’s to come.

Portions of the available residential parking will also be temporarily used to make way for construction, according to a representative for the Maryland Transit Administration. Some of the guest street parking located across from the Arliss townhomes will also be occupied by Purple Line construction and will eventually become a main road.

Originally from Brazil, Calderon purchased her townhome around 40 years ago. It was the last one on the block, and she and her husband had saved just enough money to move in with their two children. Since then, they have made improvements to the house, including the outdoor landscaping, which frames the townhome with bright green shrubs, bushes and flowers.

“It’s nice,” Calderon said. “Now, these people are going to ruin everything.”

Beyond her garden and greenery, Calderon wonders about safety. What if there’s an emergency? Will she only be able to use her back door? How will she bring out her trash during construction? Will her property taxes go up? As a retiree with a fixed income, it’s something she cannot afford, Calderon said.

Calderon has envisioned her and her husband maneuvering their way out of the house through their back door amidst the noise of jackhammers and dust during the period of construction, only to later encounter traffic as people enter and exit the station just feet away from their home.

“It’s going to be a nightmare,” she said.

The $5.6 billion project is planned to have 21 stops and connect to the red, green and orange Metro lines, as well as all three MARC Train lines and Amtrak. It is projected to affect more than 500 properties throughout the state, according to a September Purple Line property acquisition schedule provided by the Maryland Department of Transportation.

Monti Dyal, who has lived in his townhome on Arliss Street for more than 20 years, said he received the same letter from the Purple Line offering him around $3,500 to use his front yard for construction and to store equipment, but he’s still unclear about the logistics.

Though the Maryland Transit Administration has declined to comment on specific negotiations until they are complete, the Maryland Department of Transportation has spent a total of $19.3 million on all property acquisition activities for the Purple Line through October 2015, according to transit officials. An estimated total of $263.5 million has been budgeted for property acquisitions between 2016 and 2021 fiscal years.

“I can’t tell you that they’ve addressed our concerns,” said Dyal earlier this month. He also fears that the light rail system could negatively affect the value of his home.

Like Calderon, Dyal said he doesn’t know how many days the construction will take place. But rumors were circulating late last year that construction would happen around the clock — 24 hours a day, seven days a week.

“They aren’t offering us enough for the damage they’re going to do. What I’m afraid of is — with all of this digging they are going to have, that it’s going to affect the foundation (of our home),” Calderon said.

“Maryland Transit Administration carefully follows all federal and state laws and offers fair market values during property acquisitions. We also work closely with all property owners to ensure they are treated in a fair and equitable manner,” Arnette said.

The residents of the Arliss Townhome Association have since hired Joseph Suntum, a trial lawyer and partner at Rockville’s Miller, Miller & Canby law firm, to handle negotiations.

Suntum, who represents more than 40 properties along the Purple Line in both Montgomery and Prince George’s counties, has been working with Arliss Street residents the past several months, finishing appraisals of the area to see what more the state can offer to accommodate residents.

“The impact on Arliss Street homeowners is going to be pretty significant. Parking in the area is pretty tight as it is already,” Suntum said. “There will be a light rail running right down in front of their homes (every) 7 minutes every day.”

For Del. William C. Smith Jr., D-Montgomery, “a huge proponent of the Purple Line if it’s done right,” the good outweighs the bad.

The delegate said he understands the predicament residents and business owners face when it comes to construction – negotiations on their properties and rising costs – but recognizes the long-term benefits.

“In terms of transit options and supporting members of the economy that need affordable and accessible transportation, it is a huge benefit,” said Smith, whose district will have the most Purple Line stations in Maryland.

His hope is that when moving forward, transit officials consider plans that make the least impact on people’s homes, he said.

One solution might be to do a better job of having affected residents and businesses owners at the table for discussions about future projects, Smith said.

The $5.6 billion contract for the transit line was approved by the state Board of Public Works on April 6. Construction could begin as early as later this year with the light rail operating starting in spring 2022.

Suits against activists could be tossed under bill