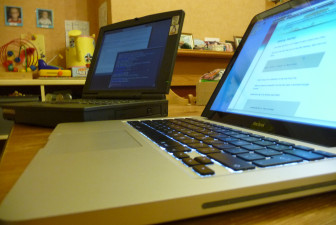 The Commission to Review Maryland’s Use of Assessments in Public Schools is considering providing state funds for technology grants for some school districts and testing coordinators at all high schools.

A lot of the findings discussed at a meeting Monday focused on improving testing, rather than reducing it.

As far as actually reducing the number of tests students take, the commission only discussed one possible solution.

For middle school, the commission considered recommending that a 2012 law requiring a “statewide assessment” for social studies be repealed or reinterpreted to allow each district to come up with an assessment themselves. The test is scheduled to be implemented for the first time in two years.

“I think this was adopted at a time when it wasn’t seen as being intrusive, and the landscape has changed dramatically since then,” said Christopher Berry, the chair of the commission and the principal of James Hubert Blake High School in Montgomery County.

This would allow the “assessment” to be something other than a test. In Howard county, eighth graders participate in History Day projects, which can be research papers, websites or performances, according to Bruce Lesh, the social studies coordinator for the Maryland State Department of Education. Districts would also be able to use a test they design and administer themselves.

Del. Shelly Hettleman, a Democrat from Baltimore County, was one of three commissioners who did not support the recommendation to not add another state test.

“I want to do some more investigation, the legislature in 2012 saw fit to enact a law about this, so I’m a little reluctant to have a recommendation without going back and looking at that legislative history,” she said.

Though this meeting was mostly about streamlining tests and making them more efficient, Berry said he expects the commission to make more specific recommendations about cutting tests at the next meeting on June 8.

The commission focused a lot on the Partnership for Assessment of Readiness for College and Careers (PARCC) tests, which are a series of K-12 tests on math and English and align to the Common Core curriculum. Janet Wilson, the superintendent of Garrett County schools, said parents and teachers complained about these tests the most.

“You have to remember, a fair amount of the testing we do is federally mandated,” Berry said. “It’s not like we can abolish PARCC.”

One of the logistical problems that mandated assessments pose, is that they often tie up all the computers in a given school for several weeks while the tests are administered.

To combat this problem, the board is recommending that the governor include funding in his budget to provide annual competitive technology grants to districts that would take into account which schools have the greatest need.

While the details have yet to be finalized, commissioners were concerned that districts could opt to apply for grants instead instead of going ahead and investing in technology with their own funds. Nathaniel Malkus, who sits on the commission as a former middle school teacher, said that is unlikely to happen.

“It would be a small amount of money, not large enough to dissuade a district technology budget decision making,” Malkus said. “Not millions of dollars.”

Commissioners were concerned that data from exams come back too late to be used to improve classroom instruction, which is the ultimate goal of taking these tests, and recommended making the data from middle school PARCC exams available by July 15 so teachers have time to use the data when they design their curriculum for the year.

They suggested giving funding to each high school for a full time employee whose only job is to coordinate exams, assess the career and college readiness of 11th graders and help teachers use test data to improve their instruction.

Unanimously, the commission voted to solicit more feedback from both classroom teachers and school test coordinators in middle schools about the middle school PARCC test. Coordinators would be asked about the administration of the test, and teachers would be asked if the test was “developmentally appropriate,” meaning that the students were capable of what the test asked them to do, like drag and drop or type certain things on the computers.

Wilson said that because the feedback would be on the technical aspects of administering the test and not on the questions themselves, it wouldn’t violate the agreement that all students and teachers sign not to discuss the content of the PARCC test.

“Generally the teachers have pretty good insight on the PARCC assessment and ease of use…I think teachers would have a lot to offer the test developers on that,” Wilson said.

They also recommended each local board of education to create its own commission to look at testing in the district.

Even once the commission finalizes its recommendations, none of them are guaranteed to be implemented. They will publish their findings in July, and from there it is up to the governor and General Assembly to determine how to proceed. The commission meets again on June 8, and has added an additional meeting the week of June 13.

Rachel Bluth can be reached at rbluth@umd.edu