CITY PRIMARY RESULTS: Baltimore City elections authorities expect to have final results today in what has become a closely watched vote count, with some campaigns holding out hope that the last few ballots could swing last week’s primary in their favor, Ian Duncan reports for the Sun. The Baltimore City Board of Elections began counting about 7,600 provisional ballots Wednesday.

NEW MAYOR, BETTER RELATIONSHIPS: Fraser Smith and John Lee, of the WYPR news team, talk about Baltimore County Executive Kevin Kamenetz’s relationship with Democratic mayoral nominee Catherine Pugh, her relationship with Gov. Larry Hogan and how that could change things for the city and the county.

GAMING CO. CHALLENGES REGULATIONS: After being hit with a multi-million dollar tax assessment, a company that distributes video gaming devices has launched a constitutional challenge to Maryland’s gaming regulations, claiming they are arbitrary and treat small businesses differently than big casinos, Heather Cobun reports for the Daily Record.

CAMPAIGN CONTRIBUTIONS & CONSTRUCTION: A condominium association’s lawyer urged a skeptical Maryland high court Wednesday to overturn the Baltimore County Council’s approval of a seven-story medical building’s construction in Catonsville due to the alleged impropriety of a councilman having accepted illegal campaign contributions from the developer, Steve Lash reports in the Daily Record. 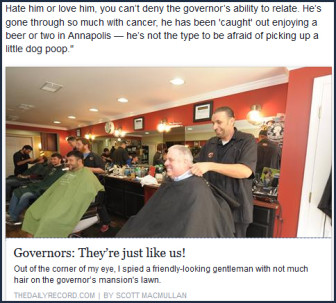 Gov. Hogan gets a haircut. Click photo to enlarge. Picture posted on his Facebook page with Daily Record article.

HOGAN STILL WON’T ENDORSE: A spokesman for Gov. Larry Hogan said Thursday that the governor still has no plans to endorse a Republican presidential hopeful, with billionaire Donald Trump the only candidate left in a once-crowded field, Josh Hicks and Ovetta Wiggins report for the Post. The departures from the race this week of Sen. Ted Cruz of Texas and Ohio Gov. John Kasich have not changed the position that Hogan articulated in a news conference Friday, said spokesman Doug Mayer.

JUST LIKE US: Scott MacMullan of the Daily Record writes about running in to Gov. Hogan as Hogan walked his dog — and cleaned up after him — on the streets of Annapolis last week.

DEMS SEE RESURGENCE IN WA CO: Mike Lewis of the Hagerstown Herald Mail reports that with their eyes on the Nov. 8 election, several of the state’s leading Democrats gathered in Hagerstown on Thursday evening for the party’s annual Washington County Jefferson-Jackson Day Dinner. D. Bruce Poole, chairman of the Maryland Democratic Party, said Democrats are making inroads in this part of the state. “We’re getting a resurgence” in Western and Southern Maryland, he said.

PART 5 UNHEALTHY BALTIMORE: MAPPING LIFE-EXPECTANCY: Jay Hancock of Kaiser Health News and CNS writes in MarylandReporter.com that, as with so much else, there are two Baltimores when it comes to health. One population is well off and gets the best results from elite institutions on the city’s west and east sides, the University of Maryland Medical Center and the Johns Hopkins Hospital. The other is a poor minority that gets far less, even as it uses hospital services at higher-than-average rates. One indicator: The typical Sandtown resident lives a decade less than the average American.

O’MALLEY TO CHAIR BOARD: Former Gov. Martin O’Malley will join Washington-based MetroLab Network as chairman of its advisory board, the organization announced Thursday. The Sun’s Michael Dresser reports that O’Malley, who folded his bid for the Democratic nomination for president earlier this year, will serve as a senior fellow of the network of university partnerships with cities and counties. The group is focused on addressing urban challenges using innovations in technology and public policy.