ZIKA IN MARYLAND: Maryland officials announced Friday that the state plans to spend about $700,000 to make residents aware of Zika and to prevent the mosquito-borne virus from spreading, reports Ovetta Wiggins for the Post. Gov. Larry Hogan said during a news conference with officials from various state departments, including health, agriculture and transportation, that his administration’s “first and main priority is keeping Marylanders safe,” and that “all levels of government are working together to respond to threats to public health. .?.?. We’re taking his very seriously.”

WOMEN SURROUNDING HOGAN: In a column for the Sun, deputy editorial page editor Tricia Bishop writes that in comparison to other governors, in Maryland, Republican Gov. Larry Hogan’s executive council is below the average when it comes to women filling executive seats, with five of 23 positions filled by women, or 22%, and some of the jobs they hold are pretty typical: secretaries of aging and disabilities.

SCHOOL CONSTRUCTION FUNDS: A $3 billion gap in state funding needed to satisfy growing statewide school construction needs could lead to a wholesale changes in how Maryland funds and builds the projects, reports Bryan Sears in the Daily Record. David G. Lever, the executive director of the Interagency Commission on School Construction, said Thursday to the 21st Century School Facilities Commission, “The problems are quite different across the state and yet we can say that every jurisdiction in one way or another is facing major capital requirements.”

STATE GOP MULLS TRUMP: The day after Donald Trump romped to primary victories in Maryland and four other East Coast states, a top Maryland GOP official wrote on Facebook that it’s time for all Republicans to rally around the front-runner, writes Michael Dresser for the Sun. “OK, after last night the Republican primary is over,” wrote state executive director Joe Cluster. “Like him or not, Donald Trump will be the nominee of the party. I know it will be tough for some of my friends to [accept] this, but it is the will of the Republican primary voters.”

HOGAN STILL WON’T BACK TRUMP: According to the AP, in a story at WBFF-TV, Gov. Larry Hogan says he still won’t support Donald Trump’s campaign for the White House, despite the Republican’s big victory in Maryland’s primary this week. The Republican governor said Friday his position has not changed after Trump won all of Maryland’s 38 delegates to the Republican National Convention.

CUMMINGS CALLS TRUMP ‘DANGEROUS:’ Brittany Britto of the Sun reports that U.S. Rep. Elijah Cummings called Donald Trump “dangerous” and said during a journalism conference on Saturday that the leading Republican candidate “turns us as Americans against each other.”  “When you have someone who is the No. 1 candidate in the Republican Party, who spews out language that basically makes people feel comfortable with doing some violent things and who turns us as Americans against each other, that’s a problem,” the Baltimore Democrat said at the National Association of Black Journalists Region 1 Conference at Morgan State University.

INSIDERS VS. OUTSIDERS:  Political commentator Barry Rascovar opines in MarylandReporter.com that on primary election day, Maryland Democrats sent a strong message that for them experience and proven ability in public office are what count most. Frustrated Maryland Republicans, though, opted to follow a charismatic Pied Piper with wild ideas and zero elective experience. 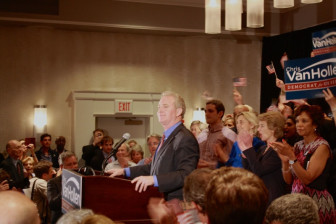 EDWARDS PASSES ON UNITY RALLY: The loser of Maryland’s most heated Democratic primary race was a no-show at the party’s unity rally Thursday, following a contest that revealed racial and gender tensions among Democrats, reports Josh Hicks for the Post. Rep. Donna Edwards, who fell short in her bid for a chance to replace retiring U.S. Sen. Barbara Mikulski did not appear at the event at a Marriott in Hyattsville, even though the chairman of the state party reached out to her directly with an invitation.

GREENS RISING? Colin Campbell of the Sun writes that in an election year when political outsiders have disrupted both Republican and Democratic presidential races, a slate of longshot candidates in Baltimore is hoping to ride the wave of voter frustration and legitimize their long-discounted third party: the Greens.

PART 1 UNHEALTHY BALTIMORE: In Part 1 of a five-part series by Capital News Service, appearing in MarylandReporter.com, Brittany Britto and Nate Kresh write that, block by block, life expectancy in Baltimore City can be measured by poverty levels. In Roland Park, where the median household income is nearly $107,000, life expectancy is more than 84 years. But in some poorer Baltimore neighborhoods, it is as low as 66.

PUGH AS MAYOR: Catherine E. Pugh says “change is on its way” in Baltimore City. The state senator who won the Democratic nomination in last week’s mayoral primary against a wide field of candidates said the city needs a new direction. Yet Pugh’s administration might not look that different from that of outgoing Mayor Stephanie Rawlings-Blake’s. Pugh has close ties to city officials and has pledged to keep several on board, Luke Broadwater and Yvonne Wenger of the Sun report.