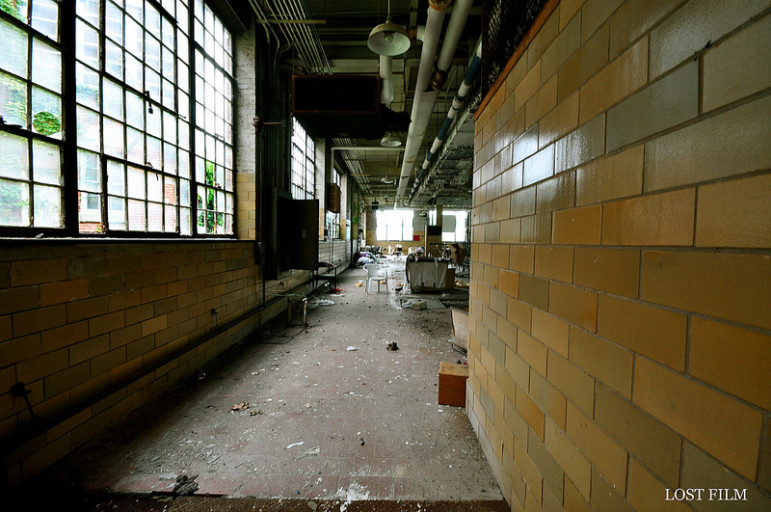 Six miles outside of Annapolis lie the decaying bones of a dinosaur.

They don’t belong to a prehistoric animal, but to Crownsville Hospital Center, a mostly vacant former asylum that costs the State of Maryland around a million dollars a year.

Many of the methods used to treat mental illness when Crownsville opened in 1911 have essentially gone extinct.

The availability and quality of medications have increased, and providers are trending toward treatment through community-based services, like psychiatric rehabilitation, housing and vocational programs, according to Jeff Richards, the incoming president of the Mental Health Association of Maryland and the CEO of Mosaic Community Services.

“There’s so many people that probably 20, 30, 40 years ago would have lived out their lives in one of those large institutions (who) are living in the community and doing great with the right range of support available to them,” Richardson said.

This means that large facilities, like Crownsville, became obsolete. No longer did the state need to run a 500-acre facility that could house 4,000-5,000 patients. These people could receive treatments in their communities while the stately brick buildings rusted and aged.

Getting Crownsville off the books

Since the hospital officially closed in 2004, Crownsville has cost the state of Maryland more than $13 million. Security guards roam the campus, a mix of lawn and trees, presiding over crumbling walls, broken windows and dark buildings.

Van Mitchell, Maryland secretary of health and mental hygiene, has made getting these empty facilities off his books a priority since he was appointed by Gov. Larry Hogan in 2015.

His department owns around 5 million square feet of real estate, and more than half of that is vacant.

“If we were in the real estate business, we’d be out of business,” he likes to say.

Among the five non-operational hospitals the state owns — Crownsville, RICA Southern Maryland, Rosewood, Upper Shore and Brandenburg — the department of health and mental hygiene has spent more than $27 million since the facilities have closed.

Some of the properties bring small revenues in from rent. The state leases the Upper Shore Community Health Center to Kent County for $1 per year.

Kent County then pays the utilities and operating costs — $378,000 in 2015 — for mental health programs and substance abuse treatment.

Because Kent County is so small, it’s not an attractive location for private rehabilitation companies, according to Andrew Pons, the program director for the A. F. Whitsitt Center, which is located at the Upper Shore Community Health Center.

“We’re the only option people have,” Pons said.

In Crownsville, 10 nonprofits lease the space for $1 per year each, including the Anne Arundel County Food Pantry.

Budget analysts are quick to note that $27 million, which works out to around $3 million per year, won’t break the budget. It’s not a massive sum of money within the context of a $42 billion annual operating budget for the state.

Still, it’s money that isn’t being spent on much of anything.

Most of the annual operating expenses go to keeping up the grounds: fixing broken windows, mowing the lawns and providing security against errant high school kids or copper-pipe thieves.

To put it in perspective, Hogan added $4 million to the state’s budget to fund a task force to study and combat the state’s heroin and opioid epidemic.

Regardless of how much it is, Mitchell said, any money spent on empty hospitals is wasted resources.

“That’s a cost to the department that should be going back into the community for services,” Mitchell said.

He’d like to see that money go to more beds to treat opioid addiction, or to the construction of a new hospital.

Part of the problem is that these facilities are what he calls “siloed.”

Good for one thing

They are chronic hospitals that were mostly good for one thing — treating mental illness — and aren’t flexible enough to treat other types of disease.

Moreover, the hospitals are old — Rosewood opened in 1888 — and full of asbestos.

Removing asbestos from buildings as old and large as the ones found in Crownsville and Rosewood could cost between $4 million and $8 million, according to Derrick Harris, an Environmental Project Manager with Access Demolition Contracting in Brooklyn, Md.

Another $700,000 was allocated in the 2016 Capital Budget to get Rosewood in a condition to be purchased by Stevenson University, formerly Villa Julie College, in Baltimore County.

“Stevenson University has been apprehensive to acquire the property due to concerns about abatement,” the Senate Budget and Taxation Committee wrote.

A spokesman for Stevenson said he couldn’t comment until a Memorandum of Understanding was finalized between the school and the state, but that the university is still interested.

There’s also the problem of priorities. Mitchell knows his department isn’t the only one vying for capital funding, the money that would be spent to build a new hospital or fix the old ones.