HOGAN TO SIGN HI-TECH ED BILL: Gov. Larry Hogan plans to sign legislation today that would launch a program under which ninth-grade students could obtain a high school diploma and associate’s degree in six years, and be on track to land a high-tech job, reports Michael Dresser in the Sun.

TIME TO VOTE: Voters in Baltimore City head to the polls today to select candidates for mayor, City Council and other top city offices. Across Maryland, competitive presidential and congressional primaries also will also be decided. Polls are open from 7 a.m. to 8 p.m., Yvonne Wenger and Luke Broadwater report for the Sun. 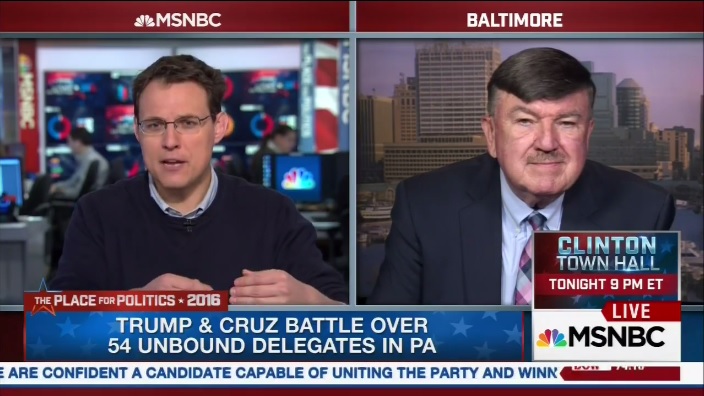 IMMIGRATION ISSUE: Deepa Ramudamu, Alexandra Pamias and Eliana Block of CNS report that immigration has been the focus of much debate during this election season and has been one of the animating issues behind the rise of Republican presidential frontrunner Donald Trump. In Maryland as well, Democratic and Republican voters are deeply split over how they view the issue and which candidate they believe is best fit to address it. National polls show GOP voters generally consider illegal immigration to be a more important issue than Democratic voters do. The story appears in MarylandReporter.com.

SUN BACKS CLINTON: The Sun editorial board has endorsed Hillary Clinton in the Democratic presidential primary.

SUN BACKS KASICH: The Sun editorial board has endorsed John Kasich in the Republican presidential primary.

HISTORICAL CAMPAIGNS IN MO CO: For a bit of a twist on hot elections, Louis Peck of Bethesda Beat recalls six Montgomery County campaigns that made headlines for their controversies.

DIVISION IN DEM SENATE PRIMARY: A Senate primary that has exposed deep racial, gender and class divisions within the Maryland Democratic Party will finally be in the hands of the electorate today, as voters choose a nominee to compete in November for a rare open seat being vacated by Sen. Barbara A. Mikulski (D) after 30 years, Rachel Weiner of the Post is writing.

EDWARDS, RASKIN ENDORSED: The editors of the Nation have endorsed Donna Edwards for Senate and Jamie Raskin for the House of Representatives in the Democratic primary, writing that, “anyone looking for a political revolution knows that it’s going to take more than a presidential nominee—and more than a president—to remake the Democratic Party as a force capable not just of overcoming right-wing opposition, but also of securing economic and social justice.”

ONE EXPENSIVE HOUSE RACE: As the year-long battle for the Democratic congressional nomination to succeed Rep. Chris Van Hollen approaches its final hours, money has continued to pour into what is already far and away this year’s most expensive House race in the nation, Louis Peck reports for Bethesda Beat.

CHALLENGING HARRIS: Three Republican challengers will try to unseat U.S. Rep. Andy Harris for his First Congressional District seat in today’s Maryland Primary Election, but the three-term congressman says he is taking it in stride, writes Liz Holland for the Salisbury Daily Times. “I don’t begrudge anyone,” he said of his opponents. “The more the merrier.”

FRANCHOT FINDS FOOTING: Peter Franchot wants you to know: He’s still a Democrat, writes Josh Kurtz in a column for Center Maryland. Estranged from the party establishment for what seems like forever, the state comptroller convened a meeting of 20 or so Democratic elected officials, party activists and thought leaders from across Maryland at his stately Takoma Park home on Sunday afternoon. On a day when most politicians and party stalwarts were engaged in frenetic, last-minute pre-primary campaign activities, Franchot brought this group together to discuss the future of the Democratic Party in Maryland – and by implication, his own.

GANNETT SEEKS TO BUY TRIBUNE: Newspaper publisher Gannett wants to buy Tribune Publishing for more than $388 million, in a deal that would give the owner of USA Today control of the Baltimore Sun, Los Angeles Times, Chicago Tribune and several other newspapers, the AP is reporting in the Daily Record.