LAWMAKERS ROLE IN CITY SCHOOL HIERARCHY: State lawmakers want a greater role in choosing the next leader of the Baltimore City school district, and want to give city voters some say in the makeup of the school board, report Erica Green and Michael Dresser for the Sun. Amid growing criticism of the city’s appointed school board and calls for the ouster of schools CEO Gregory Thornton, the General Assembly approved legislation this week that would overhaul the process by which school leadership is selected.

UM SYSTEM TUITION EXPECTED TO RISE: Students at Maryland’s public colleges would see their tuition rise by hundreds of dollars next school year under a proposal that’s expected to win approval today, Carrie Wells of the Sun writes. The board of regents for the University System of Maryland, which includes 12 of the state’s public universities, is scheduled to vote on the proposed rate hike. Tuition would increase 2% for in-state students and 3% for out-of-state students. 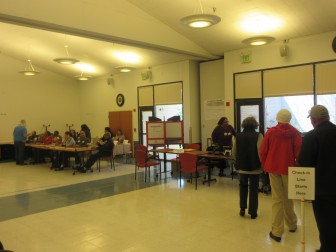 EARLY VOTING UP: Lines stretched out of Baltimore City’s early voting stations Thursday as a record number of early voters went to the polls, reports Luke Broadwater for the Sun. As of 8:30 p.m., about 5,000 people had cast ballots in Baltimore — more than four times the number of the first day of early voting in 2011. State officials reported about 37,000 early voters — three times as many as the last presidential race.

EX OFFENDERS & VOTING: Baltimore elections officials mistakenly sent letters to 34 ex-offenders saying they might not be able to vote because of their convictions, Alison Knezevich reports for the Sun.  Under a state law that took effect in March, people with felony convictions can register to vote as soon as they are released from prison.  But shortly after the law took effect, 34 people were “inadvertently processed based on an old procedure,” Armstead B.C. Jones Sr., the city elections director, said in a statement Thursday.

QUOTE UNQUOTE: Daily Record staff rounded up 21 quotes from the just-ended legislative session in Annapolis that you may find amusing.

HARD ROAD TO MAKING LATINA HISTORY: As the first Latina immigrants to run for Congress in Maryland, Democrats Ana Sol Gutierrez and Joseline Peña-Melnyk are making history. But they also are struggling to mobilize Latino voters and donors in communities that have little experience with political campaigns at this level. Both are trying to leap from comfortable, longtime perches in the state legislature into larger and higher-stakes contests that white and African American voters historically have decided, the Post’s Pamela Constable reports.

MATTHEWS BLASTS TRONE CHARACTERIZATION: Congressional candidate Kathleen Matthews took exception Thursday to her description as “a local media celebrity” in a newspaper ad purchased by one of her Democratic primary opponents, wine retailer David Trone. “You can run as many ads as you would like, but when you do, I’d appreciate it if you clean up your act when referring to me,” Matthews said at the end of an indignant open letter to Trone released by her campaign.

CHALLENGING SITTING JUDGES: It takes a lot to become a judge in Maryland, and a lot to keep the job once you’ve gone through the process, writes Len Lazarick for MarylandReporter.com. In all, 17 sitting judges around the state face 10 challengers in this election cycle as they try to hang on to the posts.

JUDGE BATTAGLIA RETIRES: The Maryland Constitution kicked Court of Appeals Judge Lynne A. Battaglia off the state’s top bench Thursday, her 70th birthday, but not without her parting shots at mandatory judicial retirement, according to the Daily Record. “It is difficult when someone is at the top of their game … to say to them that they can no longer contribute in a way that they have contributed,” Battaglia said Wednesday, her last day as an active judge. “It is hard to see people like that, at an arbitrary age, being separated from the court.”

DEFENDING VAN HOLLEN: House Democratic Leader Nancy Pelosi added her name to the growing list of Democrats calling on a super PAC to take down a television ad attacking Rep. Chris Van Hollen, but stopped short of asking Van Hollen’s opponent to do the same, writes John Fritze for the Sun.

TRUMP SEEKS RALLY VENUE: Republican front runner Donald Trump is seeking a venue to hold a large rally in Maryland after the New York primary on April 19, writes John Fritze in the Sun.