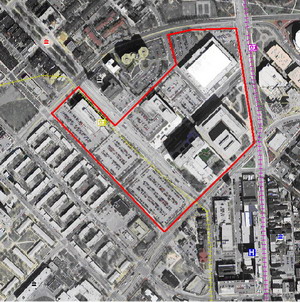 Aerial view of the blocks slated for State Center development.

It is a sad day for journalism in Maryland when a columnist is able to write such a terribly inaccurate piece, so laden with error and bias that it twists and turns an admirable public project into a supposed “boondoggle.”

Indeed, Mr. Rascovar’s recent hatchet job on State Center, “Preventing O’Malley’s folly from becoming Hogan’s,” appears to be inspired by some of the worst opinions voiced in the heyday of the Angelos litigation — old and inaccurate arguments dredged up to tarnish what is actually an incredibly smart and ambitious plan to rejuvenate a whole area of west Baltimore City from its current use as a sinkhole for public finance and deprivation.

He seems to have forgotten his previous kind words for State Center and all of the support and arguments he made back in 2006 when the project began, specifically in his report for the Goldseker Foundation, “Five Years/ Fifty Thousand Jobs.”

At the cornerstone of Gov. Erhlich’s plan was the commitment by the state to maintain its office presence at the site and serve as the anchor tenant.

So, following on from the Erhlich blueprint, officials under Gov. O’Malley negotiated a series of ground leases and leases with the developer in 2010.

Mr. Rascovar claims simplistically that the “rent is simply too high”, without either understanding the whole structure that was agreed, or without an accurate understanding the office rental market in Baltimore City.

Rather, Mr. Rascovar states with confidence that the rent is “too high” and that the state should abandon its commitments to the State Center neighborhoods, uproot everything (but let’s not forget about a massive public liability that would need to cleaned up) and move into cheap digs in Baltimore’s downtown.

Even if Mr. Rascovar’s numbers were correct (and they are not), this might all sound perfectly logical, until one actually looks at the state’s needs, and tries to find some space that could even be remotely comparable to what the state has already contracted with the developer to build at State Center.

There are no large floor plates available in the downtown area that would meet the state requirements, nor would the deal even come close to the value that has been agreed to be delivered by the developer of State Center. New LEED-rated, class A office buildings with very large floor plates, don’t exist downtown and to the extent they have been built in the past several years for other occupiers, their rents are dramatically higher that that agreed for State Center.

And yes, there are ground leases at State Center. But no, they are not worthless. Au contraire, they represent extremely valuable assets to the state where it will reap millions and millions of dollars of income over the life of the leases, 75-90 years.

Oh, and Mr. Rascovar  – were you aware that the developer has agreed to provide the State with in excess of $20 million of fit-out expenses as part of the leases ? I suppose you didn’t get that far in your critical review of the all the state agreements.

Yes the state agreed to pay for an underground garage, which it would own. But this is what was agreed with the state at the early stages of the project. It has never been the position of the developer that this was the only alternative.

And yes – state workers get “free” parking now – or should we say more accurately that rather the state pays for the parking the workers get and they do not pay for it?

In the future, the state could chose to continue this expensive subsidy, or not. But this is entirely in the hands of the state.

Certainly not even Mr. Rascovar in his infinite wisdom believes that parking in one of his imaginary low-cost City buildings would be “free”.

It is tempting to go on and refute each of Mr. Rascovar’s points one by one, (and some of the numbers he has come up with are truly extraordinary) but perhaps the better point would simply be to recall the original ambition of the project: that is to convert a sink hole of decrepit office buildings and public finance into a vibrant, job-generating, mixed-use and revitalized neighborhood that would reverse the decades of decline brought about by the original wrong-headed planning that created such a blight in the middle of midtown Baltimore. And doing this using private capital, private enterprise and private ingenuity with the state acting as an anchor tenant in order to get things moving.

State Center is not a boondoggle. It is one of the smartest and best uses that public-policy has arrived at in a very, very long time in the state of Maryland. State Center should move forward rapidly and then, Mr. Rascovar can judge whether the regeneration that takes place in midtown Baltimore, the jobs and the renewed life created from the derelict State office campus has been worth it.

The citizens of Baltimore and Maryland can only hope that Gov. Hogan and his advisors have enough common sense and business acumen to start to lead on this admirable project rapidly, ignoring the wildly inaccurate and wrong-headed criticisms of Mr. Rascovar and other pundits of his ilk.

Some fact-checking on Tyler’s critique

I am always happy to prompt a public discussion of policy issues. Now readers have some of the pros as well as some of the cons regarding the State Center project.

To clarify a few points in the development team’s response aimed at me:

–“He seems to have forgotten his previous kind words for State Center and all of the support and arguments he made back in 2006 when the project began, specifically in his report for the Goldseeker Foundation – “Five Years/ Fifty Thousand Jobs”. “

State Center is only mentioned in passing on two pages of the Goldseker Foundation study, each time as one of many examples of transit-oriented development. It was a statement of fact. No judgment was rendered on specifics of the project.

–The “current developer” group was not the original development team. That’s a fact. By the time the O’Malley administration endorsed the project, a new group was on board. Here’s how the “Community Architect Daily” blog described the situation:

“In 2008 when Lehman Brothers blew up, [developer Bill] Struever’s loan negotiations went up in flames as well and he had to give up on plans to expand Tide Point (now Under Armour’s headquarters), gave up his share at HarborPoint (now fully controlled by Beatty Development) and walked away from State Center now run by his former employee and COO, Caroline Moore.”

–The state did not conduct a traditional competitive bidding process for redeveloping State Center. That is fact.

–As for figures pertaining to the rent the state would pay and the small ground rent it would receive from the developer, the numbers come from the Department of Legislative Services’ multi-year analyses of the State Center project. (Here is but one of them.)

–Parking for State Center personnel today is free. The cost to taxpayers is identical to other free parking lots for state employees at other locations in Maryland. Charging State Center workers for parking would be a dramatic change and opens the question of whether the state should charge all its employees for parking.

–On a number of occasions, the State Comptroller and the State Treasurer have voiced serious concerns about the state getting the short end of the stick in this contract. The Department of Legislative Services at least twice has concluded the project may not be a good deal for the state.

The Hogan administration must weigh those concerns against the development team’s assertions and reach a decision. Much has changed since the original State Center concept was formulated a decade ago. Gov. Hogan, as a professional land developer, is perhaps the best person to judge if the state’s financial obligations in going forward with this project are worth the risk.