BUDGET CONFERENCE: Maryland lawmakers are making fast progress on the final details of the next state budget, report Pamela Wood and Michael Dresser in the Sun. Versions of Gov. Larry Hogan’s $42 billion budget already sailed through the state Senate and House of Delegates, and members of a conference committee settled more than half of their differences during an hour-long meeting Thursday afternoon.The conference committee’s progress means that a final version of the state budget could be set for votes in both chambers early next week — about two weeks before the end of the 90-day General Assembly session at midnight on April 11.

TAX RELIEF, REDISTRICTING: With less than three weeks left in the 90-day legislative session, Gov. Larry Hogan said Thursday that he remains frustrated that the General Assembly has not moved on his proposal to provide tax relief to retirees and to create a nonpartisan redistricting panel to draw Maryland’s legislative and congressional districts, Ovetta Wiggins reports for the Post.

MANUFACTURING TAX BREAKS: Tax breaks to encourage new manufacturing operations in Maryland are dead for this session, after the Senate Budget and Taxation struggled to come up with compromises that would please all sides, especially current manufacturers, reports Len Lazarick for MarylandReporter.com.

LIMITING TESTING: Several education bills, which would limit the amount of standardized testing in public schools during the academic year, and give assessments to only a sample of kindergarten students, passed unanimously in the past week in both chambers of the legislature, CNS’s Connor Glowacki reports in the Daily Record.

HOGAN BLASTS LIQUOR BOARD CHANGE: Gov. Larry Hogan said Thursday that an effort to strip his authority to appoint members of Baltimore City’s liquor board is “bad policy and bad politics,” writes Pamela Wood in the Sun. The General Assembly has passed a bill that requires the governor to appoint new members to the embattled liquor board, and if he doesn’t do so by April 11, the appointment power would transfer to City Hall through 2018.

AID TO BALTIMORE CITY: A package of House-passed bills aimed at bolstering Baltimore City’s economic health was approved by a Senate committee Thursday, reports Michael Dresser in the Sun. The bills are part of an almost $300 million package put together by House Speaker Michael Busch and Senate President Mike Miller to aid the economically distressed city. With their joint support, the bills are expected to pass.

JUSTICE REFORM PASSES: The Maryland Senate unanimously passed one of the most sweeping criminal justice reform bills in decades on Thursday after contentious debate over several amendments, reports Bryan Renbaum for MarylandReporter.com. The bill, SB1005, more commonly known as the Justice Reinvestment Act, would offer non-violent offenders, such as drug users, treatment and the possibility of post-conviction expungement (cleaning the record), while incarceration would still be emphasized for violent offenders.

FANTASY REFERENDUM: Maryland would become the first state to let voters decide whether the popular but controversial phenomenon of Internet fantasy sports betting is fully legal, under a bill now pending in the legislature, writes the AP’s Brian Witte in the Salisbury Daily Times. But if the House of Delegates decides not to put the matter to referendum — or if the referendum happens and voters say no — another pending bill would explicitly ban the practice, which has been debated all over the country. 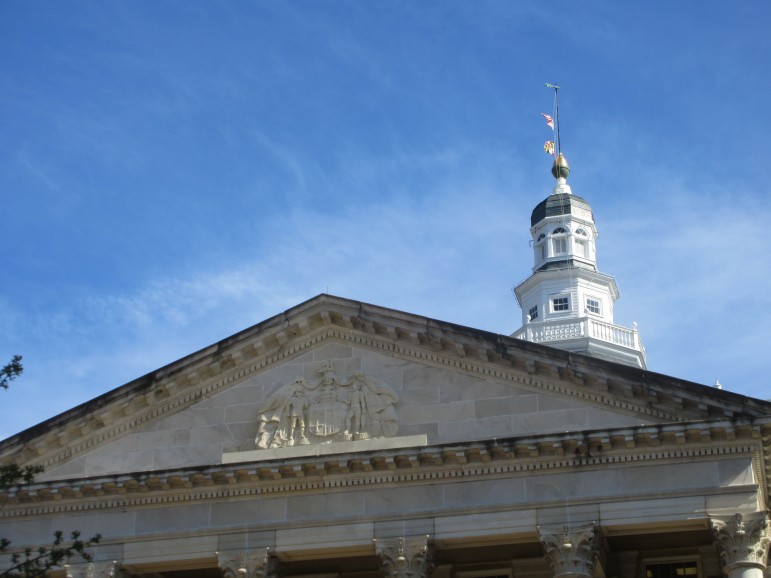 OYSTER INDUSTRY: The Senate passed a bill in a 36-10 vote that would have the University of Maryland Center for Environmental Sciences identify a sustainable harvest level for the state’s public oyster fishery, reports Josh Bollinger in the Easton Star Democrat. But the bill met opposition on Wednesday from Upper and Mid-Eastern Shore lawmakers over its language and how it could affect the future of the industry.

PARTY CAUCUS EVADES OPEN MEETINGS LAW: The Prince George’s County delegation in the House of Delegates will not meet today, but the Democratic caucus of that delegation will, writes Michael Dresser in the Sun. The membership of the delegation and the caucus are precisely the same. The difference is that where delegation meetings are generally open to the public, party caucus meetings are not.

HOGAN DISTANCES SELF FROM TRUMP: If Donald Trump wins the GOP presidential nomination, Republican Gov. Larry Hogan says he would consider voting for someone else, writes Brian Witte of the Associated Press. Hogan said he’s “not a Trump fan,” and he doesn’t think Trump should “be the nominee.” The governor says he doesn’t know who he would vote for or who the candidates will be. Hogan says he doesn’t think either party is putting up its best candidates.

VOTING TRENDS: Former Secretary of State John Willis talks with Tom Hall of WYPR-FM about current trends in voting behavior, and what factors could affect voter turnout on April 26.

ON PENA-MELNYK: In this fifth in a six-part series profiling the candidates seeking the Democratic nomination to represent Maryland’s 4th Congressional District, Arelis Hernandez of the Post writes that the telephone number listed on Del. Joseline Peña-Melnyk’s campaign material connects directly to her mobile phone, which rarely leaves her hand as she drives from suburban Maryland to Annapolis in her lime-green-and-blue Toyota Prius.

GOP RACE FOR SENATE: In a state where there are more than twice as many registered Democrats as Republicans, whoever wins the April 26 primary for the Republican nomination in the Senate race faces very long odds in the general election. All four of the candidates on stage Thursday tried to balance conservative positions with a moderate appeal.

VAN HOLLEN ON AIR: Rep. Chris Van Hollen’s campaign for Maryland’s open Senate seat is airing a new television ad that calls attention to an education loan scandal he helped expose more than a decade ago as new member of Congress, writes John Fritze in the Sun.

EMILY’S COMMITMENT TO EDWARDS: Emily’s List is committed to defeating Chris Van Hollen because he’s a man running against a woman for the Democratic nomination to succeed retiring Sen. Barbara  Mikulski, the longest-serving woman in Congress and the first woman elected with Emily’s List support. The pro-choice women’s group is committing at least $2.4 million from its super PAC — Women Vote! — to help Rep. Donna F. Edwards defeat him, reports Rachel Weiner for the Post.

EDWARDS, VAN HOLLEN ON JUSTICE REFORM: The national debate over criminal justice reform has become a central issue in the campaign for Maryland’s open Senate seat, writes John Fritze in the Sun Rep. Donna Edwards blames her opponent for swelling prison populations because he supported legislation in Congress to impose mandatory minimum sentences. Rep. Chris Van Hollen has backed reducing penalties for nonviolent offenses and contends that Edwards only waded into the debate after launching her Senate campaign.

LEGGETT SEEKS TASER REVIEW: Montgomery County Executive Ike Leggett has asked police to review the department’s use of Tasers, the electric-shock stun guns deployed by county officers in four fatal incidents since 2009 — the most of any jurisdiction in the state, Bill Turque of the Post reports.