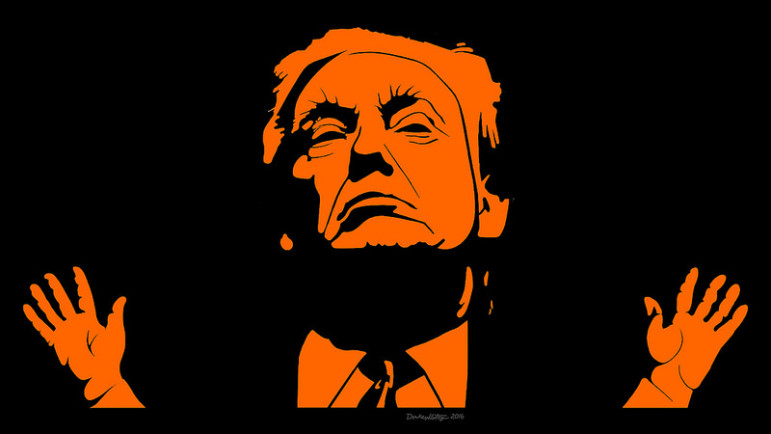 When Maryland’s Presidential Primary takes place next month, Donald Trump will be leading the field already narrowed to three with the departure of Marco Rubio.  Early on many people did not take his candidacy seriously and therefore did little to oppose him. Now, however, he is stirring anxiety and alarm among increasing numbers of the party faithful.

Some argue that Trump is not a true conservative.  Others are appalled at his demagogic language and the increasing violence accompanying his public events.

Fact checking does not seem to lessen the enthusiasm of his supporters. Calls by prominent Republican leaders to reject Trump have not slowed his momentum and may, in fact, have been counterproductive.

When asked recently whom he would be supporting among the Republican candidates, Governor Larry Hogan ducked the question.  Given his earlier enthusiastic backing for New Jersey’s Governor Chris Christie, it’s hard for Hogan to claim that he doesn’t want to get involved in national politics.

At his press conference, he said he was “disgusted” at what is going on with both parties during this election.  That, of course, is also evasive since there was never a chance that he would be supporting Hillary Clinton or Bernie Sanders, much less Martin O’Malley.

Hogan’s challenge is hardly unique.  What are moderate and conservative Republicans to do about Trump’s candidacy?   Right now, it looks like a lose/lose proposition.  Many analysts see a Republican electoral disaster looming if Trump is at the top of the ticket in the fall.  It’s not hard to imagine the party losing control of the Senate and having a significant chunk of its large House majority eroded.

The other side of the equation doesn’t look much better.  If the New York billionaire were to prevail in the General Election, the Republican Party as it has historically existed would be one of the losers.  And, of even greater significance, this country would be a very scary place.

Can Larry Hogan and other leaders of the Republican Party prevent a Trump nomination?  That’s not at all clear at this point. Those party leaders have been both timid and ineffectual in opposing Trump.

As many have argued, the failure of elected Republicans to follow through on promises made to their supporters during previous elections is one of the sources of Trump’s popularity.

A second factor, more disturbing, has been their tolerance, at times encouragement, of appeals to racial bias, demonizing of immigrants and calls for a return to a past that will never exist again.  Their complicity in the “birther” movement and the assertions that Barack Obama is really Muslim have contributed directly to the Trump movement.

Do reasonable Republicans—I include Hogan in that category even though I disagree with some of his policies—have the political courage and judgment to stand up to Trump?  The first line of attack is to try to deny him the Republican nomination, although it might be already too late to succeed in that endeavor.

Moreover, that undertaking raises the risk that he might run as an independent if denied the party’s nomination.  A second possibility is that his supporters, a considerable plurality of voters in Republican primaries, will sit out the election.

The original error of the Republican establishment was to hope it could keep Trump’s supporters without keeping him.  That’s probably not going to happen.

Ultimately, the key to guaranteeing that Trump won’t become president is for Republicans who are uneasy with his candidacy to decide that it’s better to have one of the Democratic candidates as president than to run the risk of electing Trump.

That would require them to distance themselves from his fall campaign.  Indeed, that may be the only way Republicans like Hogan can reclaim the party from the insurgency that Trump is riding.

National Republicans are already splitting on what to do.  Both Ben Carson and Chris Christie have picked expedience over principle by endorsing Trump.  Hogan has the opportunity to step out from Christie’s considerable shadow and stake a claim as a thoughtful leader in the party.

To do that, however, he will need to publicly oppose Trump even if that means risking a barrage of invective from the reality show star. Staying quiet at a time like this is not a sign of leadership.  Trump appeals to the worst in people and has openly challenged some of the most important values of our constitutional system.

If Hogan remains silent, he will be making the same mistake that others in the party have made, wanting Trump’s supporters at any cost.  Between now and the April 26 Primary, Hogan has a wonderful opportunity to show that he has the political courage to do what is right rather than what is expedient.