Donald Trump as a sumo wrestler in GOP debate. By DonkeyHotey with Flickr Creatives Commons License 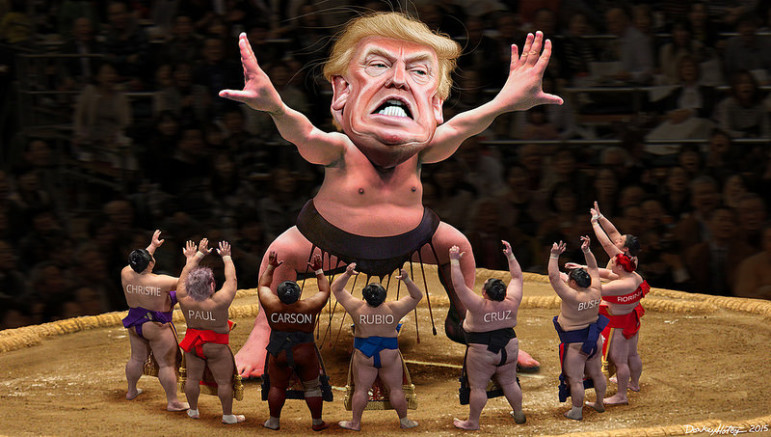 Donald Trump as a sumo wrestler in GOP debate. By DonkeyHotey with Flickr Creatives Commons License

The Republicans faced an inextricable bind as they entered into the last GOP debate of the year.

If they didn’t seriously confront Donald Trump and his nasty, uninformed and prejudicial rhetoric and exclusionary policy recommendations against honored Americans and major religions respectively, they would be depicted by Democrats as gutless.

If they did do that, they would run the risk of angering Trump to sufficiently motivate him to run as an independent, virtually guaranteeing the 2016 election to Hillary.  Trump’s answer to that question in the debate may transform the election.

Trump is helped by 12 Republicans opposing him because it divides and dilutes the non-charismatic, reasonable and quasi-reasonable right.  That so many with negligible public support stay in the race is the victory of egotism over patriotism.

Trump’s rhetorical imperviousness has been unique…he has not been hurt by attacks on a brave national hero, John McCain, attacks on religious freedom of Muslims, or attacks on women, such as Megyn Kelly and Carly Fiorina. In addition, there has never been a major candidate like Ben Carson who, along with his supporters, admits he has to catch up to equal the foreign policy mettle of competing candidates. Rhetorical excellence does not always yield political success; nor does rhetorical weakness always yield political failure.  With so many principals still competing for the nomination, the effects of the debate are not likely to be major.

Donald Trump…lacks any sophistication in national security and military strategy…claims all wildly general…repeats, but does not defend seriously, his agenda-capturing policy recommendations of exporting 11 million illegal immigrants, building a wall, closing “part of the Internet”…using “good people” and “tough people”…”infiltrating the Internet.”

Ted Cruz…knows he is brilliant because everyone so asserts…says if he is elected, he “will destroy ISIS”…”will keep America safe”…when asked about controversial votes weakening our security while advancing idealistic issues of freedom in time of war, he ignores the criticism…

Ben Carson…calls for moment of silence for San Bernardino victims: time consumer for person not up on foreign policy…throughout his lack of security and foreign policy issues becomes manifest.  Good man; bad presidential nominee…asked to adjudicate dispute between Rubio and Paul and Cruz?  Says to let them fight.  The good man didn’t know.

Marco Rubio…on every issue Rubio was eloquent and consistent…full disclosure: I have thought him the best candidate in substance and electability for about a year…Rubio defeated Cruz in the debate on the importance of metadata and Cruz’s vote on the military authorization bill, which Cruz pooh-poohed in the debate and ignored the substance of the issues…Rubio was strong on criticizing President Obama’s cutting our military strength…if you contrast his analysis of the U.S. use of the strategic triad with Trumps cluelessness, it was embarrassing, but probably not consequential for the latter.

Jeb Bush…continues to look like a sad foil for Donald Trump, although his knowledge often came through…reminded audience that Trump’s oversimplification on Muslims ignores many inconvenient facts, including the fact that our number one strategic ally against ISIS is the Kurds, who are Muslims…

Chris Christie…says America has been betrayed by Barack Obama and Hillary Clinton…a convincing point that Christie consistently implied but did not explicitly say is that governors make good presidents, while senators do not know how to make effective administrative decisions…he should add that President Obama is a case-in-point.  Relatedly, he also effectively argued that getting mired in the weeds of comparable legislative bills loses the American people. Strong, strong dominant performance.

John Kasich…says too much yelling in politics…echo of Richard M. Nixon’s “we’ve got to lower our voices;” as with all of his compatriots, he argued that we need to confront and destroy ISIS, not just have climate discussed at climate discussions; says we have to have a coalition to destroy ISIS…but so did everyone…no gains, no losses tonight…

Carly Fiorina…true to form: the most informed and articulate of all candidates, save perhaps Rubio…could be a vice presidential candidate…convincing when she argues that when DHS says defeatedly we cannot check social media, all parents check social media…illustrates throughout the irresponsibility of the Obama Administration…

Hard to predict how performance quality affects polling support, but it should raise Rubio and Christie and Fiorina, but lower Trump.

Nothing said, however, was as material as was Donald Trump’s reiterating his promise not to run as an independent. Thus the major outcome of this debate is that Republicans have a chance to win..