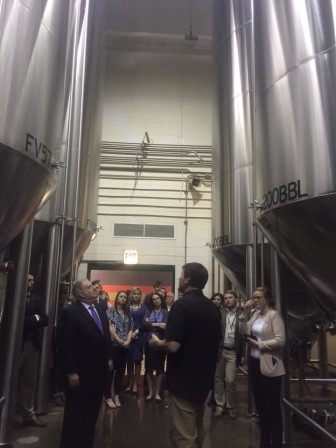 Hogan, who took Frederick County with 63% of the vote, continued a call he made at a lunch for business leaders yesterday, asking them to contact their legislators in Annapolis to help move his agenda forward.

“If you like the progress that we’re making and the direction that our state is now headed, please contact your legislators and tell them to put aside the partisanship and to work together with us, tell them that we can’t afford to return back to the same failed policies that got us into this mess in the first place,” he said at a Frederick Rotary Club lunch.

In Annapolis, by contrast, Democratic senators on a floor session complained that the Hogan administration and its agencies are disengaged from the legislative process, refusing to take positions on hundreds of bills, including ones to aid the poultry industry.

Turning around a deficit

Hogan also played up his connection to Budget Secretary David Brinkley, a former state senator from Frederick County. He said Brinkley had helped turn around a $5.1 billion structural deficit.

“In just one year we eliminated nearly 90% of the $5.1 billion structural deficit that we inherited and now, our newest budget, provides for $1.1 billion dollars in the rainy day fund and a $450 million cash balance,” Hogan said.

(Hogan’s supplemental budgets cut that surplus to $303 million, and the Senate budgeters want to cut the rainy day fund by $80 million.)

Some of that additional highway money came from a gas tax hike Hogan wanted to reduce.

The cornerstone to his Frederick visit was a press conference in Solarex Court, home to major employer and pharmaceutical giant AstraZeneca, which recently announced plans to expand throughout Maryland, particularly in Frederick County.  Solarex Court is located at the intersection of MD-180 and US-15, which connects Frederick with I-70.

Standing beside Transportation Secretary Pete Rahn, Hogan said the state will invest $36.9 million to alleviate congestion along those routes and that this spring the Department of Transportation will commence plans to widen MD-180 and build a new bridge over US-15. The plans totaled $404 million in transportation projects for the entire county.

Emphasizing his administration’s efforts to create a business-friendly environment for businesses, Hogan also said the widening of MD-180 would be completed by December 2016, and would thus be ready in time for the final phase of AstraZeneca’s expansion in the summer of 2017. Construction of a $31 million dollar bridge over U.S. 15 will also start in the fall of 2018.

Local officials chimed in at the press conference, including prominent Democrat Frederick County Executive Jan Gardner. She thanked Hogan for supporting the infrastructure initiatives, particularly the 180 project,  the second bridge and the funding for the I-270-85 interchanges.

Frederick Mayor Randy McClement, a Republican, also thanked Hogan for his efforts to alleviate traffic congestion, but also expressed gratitude for the governor’s efforts to return highway funds allocated by the federal government to the states back to local municipalities and taxpayers.

“I also want to say thank you to the governor for his staunch support of trying to get highway user revenue back into the coffers of those that actually can use it, McClement said.

The Senate on Wednesday rejected efforts to restore highway user revenues its budget committee had cut.

Rotary lunch and other visits

Following the transportation announcement, Hogan spoke briefly at a luncheon hosted by the Frederick Rotary Club held at nearby Dutch’s Daughter Restaurant where he documented sustained efforts to make Maryland a more friendly environment for businesses.

Hogan’s itinerary also included a ground-breaking ceremony for the Frederick Memorial Hospital James M. Stockman Cancer Institute, which was his first stop, a business visit at Baltimore Coffee & Tea, a tour of the Flying Dog Brewery, and finally ended the day with a walking tour of downtown Frederick.

“When I was sworn in as governor a little over a year ago, I pledged that we would put Maryland on a new path and create a more business friendly future for our state and that’s exactly what we have done,” Hogan said.  “We said that we would work to get the government off our backs and out of our pockets, so we could grow the private sector, put people back to work, and turn our economy around, and we’ve been doing exactly what we said we’d do.”

Speaking of taxes, Hogan said, “Last year was the first time in recent history, we ended our first legislative session with no new tax increases. In fact, we actually cut taxes, which is something almost unheard of here in Maryland.”

Local governments fight requirement for public notices in newspapers, but publishers push back