BLACK COMMUNITIES & HOGAN: African-American Maryland lawmakers accused Republican Gov. Larry Hogan of undermining black communities with his policies. But Hogan spokesman Douglass Mayer retorted that the administration “has invested more state dollars in regions of the state that are predominantly African American than anyplace else.” Fenit Nirappil of the Posts analyzes Hogan’s record to answer who is right.

OPEN MEETINGS BILLS: Two Carroll delegation members made their pitch in Annapolis earlier this week to make changes to the state’s open meetings law intended to improve accessibility for the public. One calls for public bodies subject to open meetings law to make available an agenda 24 hours in advance of any meetings.

STOPPING ROUGH RIDES: Maryland lawmakers are considering legislation that would prohibit law enforcement officers from giving “rough rides” to prisoners, meant to hurt them during transport, Erin Cox reports for the Sun.  A bill proposed in the General Assembly would require all prisoners to be secured with a seat belt while being transported, a precaution proponents say could have prevented the mortal injury Freddie Gray suffered while handcuffed and shackled but unbelted in the back of a Baltimore police van last April.

SPEED CAMERA TICKETS: In supporting speed camera ticketing, the editorial board for the Frederick News Post writes that speed cameras, red-light cameras — you can hate them, or just dislike them as a necessary evil. No one, us included, likes them. But they are here to stay, because they’re effective, notwithstanding the millions of dollars a year they rake in for state and local jurisdictions.

RX POT CERTIFIERS: Maryland would allow midwives, nurses, dentists and foot doctors to certify patients for medical-marijuana under a bill the state House of Delegates passed Friday, writes Josh Hicks in the Post.

PRO-GUN LOBBYING: Deer season may be over in Maryland, but lobbying season is well under way in Annapolis. Hunters and gun enthusiasts have held signs this week around the State House, protesting two bills that were debated in the House of Delegates Judiciary Committee Friday, CNS’s Rachel Bluth writes in MarylandReporter.com.

HOGAN’S SOCIAL MEDIA SAVVY: Bryan Sears of the Daily Record writes about Gov. Hogan’s adept use of social media. And while Democrats in the General Assembly perhaps are not Hogan’s primary audience, they are listening and responding sometimes in real time from their seats on the floor of the House of Delegates and the Senate.

HOGAN STAYS OUT OF PRES POLITICS: Gov. Larry Hogan said Friday he’s staying out of presidential politics and his previous endorsement of New Jersey Gov. Chris Christie “doesn’t translate” into an endorsement of Donald Trump. Christie, who dropped out of the race for the Republican presidential nomination this month, surprised the political world by backing the brash billionaire Friday, calling Trump a “good friend,” Erin Cox of the Sun reports. 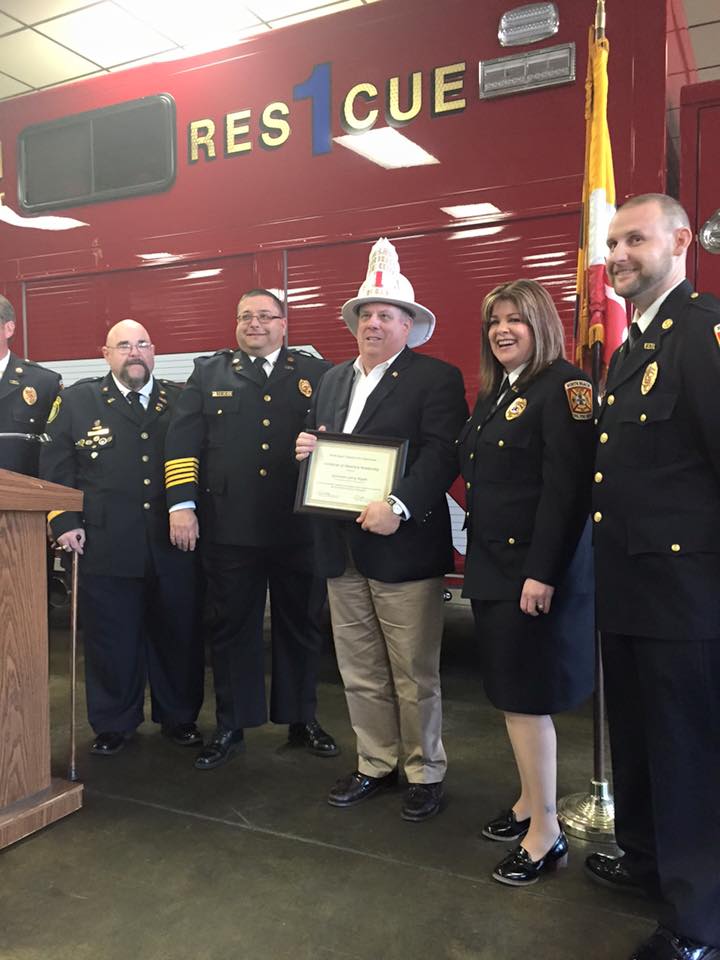 As part of a Southern Maryland tour this weekend, Gov. Larry Hogan was made an honorary fire chief at the North Beach Volunteer Fire Company in Calvert County.

ANGEL INVESTOR PROGRAM: Normally, new entrepreneurs aren’t paying a lot of attention to the legislative process in Annapolis. But there are signs that may be changing — at least for some. Earlier this month, several people representing the startup community in Maryland testified in favor of the bill at a hearing in front of the House Ways and Means Committee., writes Anamika Roy in the Daily Record.

SPARING HOSPITAL JOBS: The jobs of 57 low-level state workers at the Springfield psychiatric hospital — an economic anchor in the Sykesville community for generations —  will vanish at the end of the fiscal year under a plan in Gov. Hogan’s proposed budget to privatize food services at the facility. On Saturday, several business leaders gathered with Springfield employees and union officials  to voice hope that the plans will be abandoned, writes Kevin Rector in the Sun.

LEAD PAINT ACCOUNTABILITY: Advocates for holding the lead industry accountable for poisoning are hoping to convince fellow lawmakers that, much like tobacco companies, the lead industry knew its product was harmful as early as 1899, marketed the paint to children anyway, and then callously dismissed the damage caused, Luke Broadwater writes in the Sun.

GERRYMANDERING: In an op-ed for the Sun, Montgomery Democrat Phil Andrews asks will Maryland lawmakers stop rigging elections? Most state lawmakers in Maryland and across the nation have voted for gerrymandered congressional districts to rig elections in favor of their parties’ nominees. This has reduced the number of competitive general elections, driven down voter turnout and contributed to gridlock in Congress.

NOW FOR PART II: The Annapolis Capital’s Amanda Yeager foreshadows the second half of the General Assembly session and wraps up the first half of the session, writing that it has been marked by back-and-forth between Gov. Larry Hogan and state Democrats, who have sparred over transportation funding, the appointment process for the state superintendent of schools and funding for Baltimore City — among other topics.

SEPARATION OF POLITICS & EDUCATION: Mixing politics and education can be lethal. They are best kept far apart, opines Barry Rascovar for MarylandReporter.com. That’s why Maryland, for 100 years, has isolated the governor and state lawmakers from the process of choosing the state superintendent of schools. Liberal Democrats in the General Assembly, though, sought to change that. That was a very bad idea.

MO CO BOOZE SYSTEM: Montgomery County government’s monopoly on alcohol sales, which appeared headed toward dismantlement three months ago, will remain intact for at least a year and possibly longer, Bill Turque of the Post reports.

WEALTHY DISTRICT 8 CANDIDATES: One candidate makes more than a quarter of a million dollars a year as a law professor. Another carries $165,000 in student loan debt. Then there’s the contender who’s really rich. Bill Turque of the Post reports that disclosure statements filed by candidates for Maryland’s District 8 Congressional seat reflect the wealth of Montgomery County, home to the bulk of the district’s voters, where median household income is just under $100,000 a year. The statements also offer glimpses into other financial circumstances, including challenges posed by debt.

VAN HOLLEN WINS IN STRAW POLL: Rep. Chris Van Hollen beat rival Senate candidate Rep. Donna Edwards in a straw poll held by the Young Democrats of Maryland at the group’s annual statewide convention, writes Rachel Weiner for the Post. Van Hollen, who represents Montgomery County, won 76 votes in the informal survey, compared with 34 for his rival, who comes from Prince George’s County. The two are competing in an April 26 Democratic primary to replace Sen. Barbara A. Mikulski.

SENIOR ISSUES AT 4th DISTRICT FORUM: Senior citizens are among the most consistent voters in Maryland’s 4th Congressional District, so when it comes time to choose a candidate, the fate and future of Social Security is usually one of the first topics they raise, Arelis Hernandez of the Post writes. At a forum in southern Prince George’s County on Saturday, an audience of about 50 — mostly senior citizens and retirees — heard the first question from 90-year-old moderator Elsie Conway: What would the candidates do to protect their benefits?

SMIGIEL FOR CONGRESS: About a dozen citizens – including Cecil County Executive candidate Joe Carabetta and former County Commissioner Michael Dunn – attended a town hall meeting for the Smigiel for Congress campaign on Saturday. Former Del. Michael Smigiel is running for the Republican nomination to the U.S. Congress from Maryland’s 1st District, the seat currently held by by Andy Harris, writes Cheryl Mattix for the Cecil Whig. 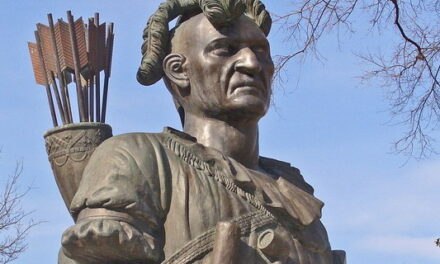