Plaster doesn’t need third career in politics, but he wants one

This is a slightly revised version of a column that appeared in The Business Monthly in December. 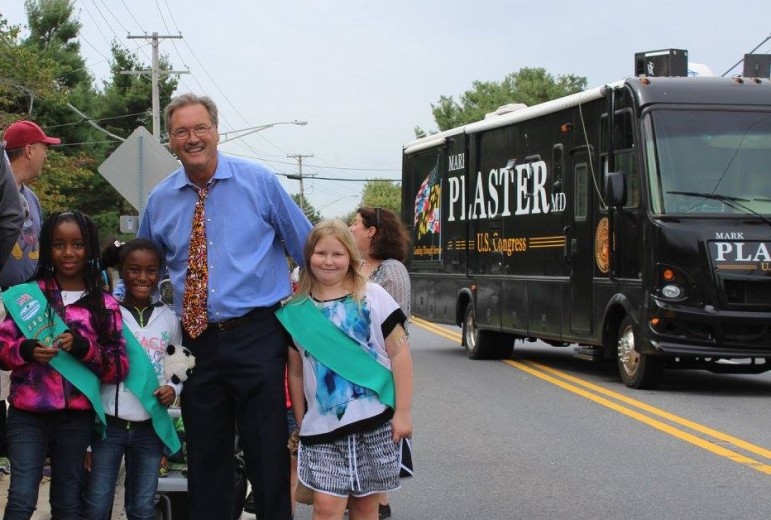 Mark Plaster and his bus in October’s Burtonsville Day parade. From his Facebook page.

Mark Plaster has a big, black, 38-foot RV with his name plastered all over it. You may have seen it in Annapolis or Bowie or Olney or Burtonsville or Silver Spring or Towson or Columbia or Baltimore.

In other words, you may have seen the RV all over the odd-shaped 3rd congressional district, the second most-gerrymandered district in the country.

“That’s why we bought the bus,” said Plaster. “We want to have a presence throughout the district.”

Republican Plaster is running (or should that be riding?) for Congress, hoping to unseat Democrat John Sarbanes.

“Most of the people in the district still think they’re voting for his father,” Paul Sarbanes, the five-term U.S. senator, said Plaster.

That may or may not be true, even though his voice can sound very much like his father’s. In his fifth term, Sarbanes regularly robocalls residents to participate in town halls by telephone, and he sends out the usual congressional mailers at taxpayer expense.

Sarbanes and most of the other Democrats in the congressional delegation are the kind of career politicians that Plaster thinks are what is wrong with the political system. This election, he believes, “People are going to look outside the box. They’re going to look for people who don’t have political careers,” said Plaster. “I’ve had two successful careers. I don’t need a third.”

Plaster, 63, has two homes in the Annapolis area, including waterfront property in Harwood. He has been an emergency room physician and the head of a publishing house that grew out of his medical practice. His publications include Emergency Physician Monthly, which goes to 30,000 physicians; Emergency Physicians International; and a newer venture, called Telemedicine Magazine.

In 2001, with his son Logan at the Naval Academy, Plaster moved to Maryland from Delaware, and at the age of 50, volunteered for the U.S. Naval Reserve. He was eventually deployed to Iraq as the head of a Shock Trauma Platoon for the 1st Marine Division, and went back again in 2008 with the 2nd Marine Division.

When he came home from the last tour of duty, he was not happy with the way the country was heading under President Obama.

Last year, “the thing that really got me off the bench was Larry Hogan’s message,” and his election as governor. Hogan won the 3rd Congressional District by 24,000 votes, and that showed Plaster he has a shot.

He’s given up practicing medicine. Running for Congress “is pretty much a full-time job,” he said.

“I think voters are ready for those people with practical skills,” said Plaster, and that’s what his experience as an emergency physician has given him.

“We have a complete partisan divide, largely because we have professional politicians,” said Plaster. “They don’t want to work their way out of a job,” so they resort to “dishonesty and distraction,” preferring not to solve problems.

“There are good ideas on both sides of the aisle,” he said. “Partisanship, even within a party, prevents people from analyzing problems on their own merits.”

Understandably, Plaster has a strong focus on health care.

“We need to keep parts of the Affordable Care Act,” such as making sure all insurers cover pre-existing conditions. On the other hand, “People are being forced to buy a very expensive policy that doesn’t cover very much,” Plaster said. “It’s only going to get worse.”

Soon to kick in is a 40% excise tax on so-called “Cadillac” health insurance, high benefit plans provided by large employers and under some union contracts.

“It will crush a lot of people,” but the $87 billion it is expected to generate is “what makes Obamacare work. It doesn’t have a sound financial model without it.”

Plaster wants to stick with the private health insurance market, and there are a lot of options already on the table to improve coverage, he said. “Just throwing more insurance at people” without increasing the supply of health care providers doesn’t work. We have to do what’s sustainable.”

In a piece of good timing, this week Plaster is attending several fundraising events in Florida.

Sarbanes raised $348,000 this year, has spent $224,000, but still has $872,000 in cash on hand, which is representative of the usual mismatch between incumbents in Congress and their potential challengers.

The final fundraising totals for 2015 are due to the Federal Election Commission on Sunday.