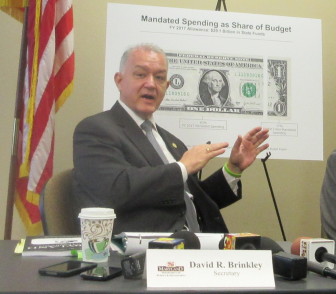 Legislators and nonprofit groups are still digesting the $42.3 billion budget Gov. Larry Hogan submitted Wednesday. But there were few signs of indigestion over a proposal that increases spending by $2 billion (5%), while setting aside a record $1.5 billion in reserves and surplus.

“We don’t know until we get into all the details” is the way House Speaker Michael Busch summed it up after breakfast with the governor and fiscal leaders.

Hogan had already laid out the broad outlines of his plans in a budget preview two weeks ago and a press conference on “very modest” tax relief last week.

The governor’s staff has already saved money and slimmed down the budget. They cut one whole 500-page volume from the budget detail, and kept to last year’s stark black-and-white covers, without the colors and cover photos of the O’Malley years.

What the Hogan administration has stopped printing is the Managing for Results pages that are a holdover from the Glendening administration and the budget personnel detail. All that can be found online, along with the budget books themselves.

Sean Johnson, legislative director of the Maryland State Education Association said he was “cautiously optimistic” about the governor’s budget. The governor has repeatedly boasted he is providing record funding for K-12 education, to the tune of $6.3 billion, a 3% increase that fully funds all the mandated education formulas.

Hogan wants to reduce those mandates, but that will be a separate fight on a piece of legislation still being worked on. A much bigger fight is more likely to come next year over the likely changes in school aid a commission is currently studying. Such commissions almost always recommend spending more on schools.

Hogan is also increasing funding to community colleges by 6%, while aid to state universities goes up just 3%, triggering a likely 2% tuition increase.

The biggest gains are a $500 million boost for transportation, an 11% hike largely funded by automatic increases in the gasoline tax that Hogan tried to reverse last year. They now have gone completely unnoticed as gas prices have plummeted. Having failed last year, Hogan has said he will not ask legislators again to reduce those taxes.

The biggest percentage increase was for natural resources and the environment, which get 17% more, but that is only $140 million.

Alison Prost, Maryland executive director of the Chesapeake Bay Foundation, said, “At first glance, this budget appears to be a welcome New Year’s resolution by Maryland – to spend revenues on Bay clean-up efforts that were intended just for those purposes. Shifting some of those funds to other purposes has become an Annapolis tradition.”

“We still are examining exactly how the $53 million in revenue in The Chesapeake and Atlantic Coastal Bays 2010 Trust Fund is proposed to be spent.”

Budget Secretary David Brinkley and his deputies handled the budget briefing this year, while Hogan was doing an interview on WBAL radio. Hogan said his spending plan is “one that people may have a hard time disagreeing with.”

But of course there were already some naysayers.

“The governor ‘says’ he fully funds education,” said Madaleno, who is the vice-chair of the Senate Budget and Taxation Committee which will gets first whack at the spending plan. “His approach has been to do the minimum and that’s what he has done.”

Patrick Moran, president of AFSCME 3, said they were unhappy that they only got 2 to 4% step increases in pay, and not the additional cost-of-living hike they had sought. He said the administration was constantly complaining about the cost of overtime, but Moran said that was because there were 6,300 vacant positions in state government, 600 vacant in corrections along.

Many of the correctional officers and juvenile service workers his union represents are working mandatory overtime “out the wahzoo” because jobs go unfilled.

Maryland Center on Economic Policy Executive Director Benjamin Orr said, “Even though the state can afford to maintain current levels of state services, the governor has opted to shortchange certain programs. For example, while he has touted his support for public primary education, he has opted not to invest in higher education at the levels that state experts said is needed.”

Some of the savings in Hogan’s budget may result from problems with people getting their Medicaid renewed, an issue Maggie McIntosh raised as well.

Rachael Bluth of Capital News Service contributed to this story with the quotes from MSEA’s Johnson and Sen. Madaleno.