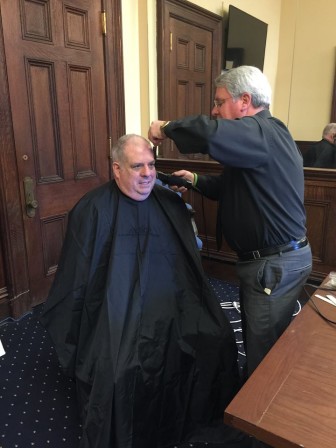 Gov. Larry Hogan gets his first haircut as his hair starts to come back after chemotherapy. From his Facebook page.

$400 MILLION IN TAX RELIEF SOUGHT: Gov. Larry Hogan, who vaulted to an upset victory in 2014 on a platform that promised tax cuts, is pushing for $400 million in tax and fee relief over the next five years. It may sound big, but even Hogan (R) concedes it’s modest, Fenit Nirappil reports in the Post.

MANDATED & UNSUSTAINABLE: The editorial board for the Post opines that Gov. Larry Hogan was elected on promises to cut taxes and nudge the state toward a more business-friendly posture by restraining spending. As Hogan pointed out, mandates account for more than 80% of the state’s annual spending, which means that governors have relatively little budgeting leeway. The fact that 83% of state spending is formulaically mandated is, as Hogan pointed out, unsustainable.

CUT SOME BUSINESS TAXES: In an op-ed in MarylandReporter.com, William Campbell of the Maryland Taxpayers Association urges the state legislature to either eliminate or reduce the local personal property taxes for small businesses.

ON TRANSPORTATION: In Marc Steiner’s final installment of WEAA-FM’s Countdown to the Annapolis Summit series, Steiner and guests look at  transportation issues that will be addressed in the 2016 Maryland General Assembly. He is joined by Richard Hall,of Citizens Planning and Housing Association; and Sens. Richard Madaleno and George Edwards.

MSEA SEEKS OPT-OUT ON TESTING: Despite limited mental capacity, a feeding tube, a wheelchair and the inability to speak, a child with cerebral palsy must take the same standardized tests in Maryland as his classmates. But the Maryland State Education Association wants to give students with disabilities the chance to opt out of grade-level testing, depending on their needs, parents’ wishes and any testing accommodations allowed, writes Christine Stoddard for MarylandReporter.com.

COUNCIL URGES VOTING VETO OVERRIDE: The Baltimore City Council on Monday urged the Maryland General Assembly to override Gov. Larry Hogan’s veto of a bill that would have given voting rights to ex-offenders while on probation or supervised release, Luke Broadwater reports in the Sun. “There is a movement to override this veto,” said City Councilman Brandon Scott, who sponsored a resolution calling for an override that was adopted by the council. “These people are taxpayers. With everything that happened in our city, we should realize that we should invite people back into society.”

CHARITIES LAY OUT PRIORITIES: Leaders of charities in Maryland gathered Monday ahead of the start of the General Assembly session to lay out their legislative priorities for the less fortunate in the Free State, writes Danielle Gaines for the Frederick News Post. Their “State of Our State” address focused on quality of life; the legislative preview was organized by the Maryland Association of Nonprofits.

FANTASY FOOTBALL & STATE CONSTITUTION: A 2012 law meant to legalize fantasy football and related gaming in Maryland violates gaming laws enshrined in the Maryland Constitution, Senate President Mike Miller says. Miller, who voted for the law nearly four years ago, made his comments during a wide-ranging interview and at a time when he has requested an advisory letter on the legality of the industry from the counsel to the General Assembly, reports Bryan Sears for the Daily Record.

FUNNY MAN MILLER: Senate President Mike Miller apparently is a huge fan of recycling — at least when it comes to reusing U.S. Sen. John McCain’s old jokes. Elisha Sauers has the story for the Annapolis Capital. The article is topped by an audio of Miller.

ELECTION STRESS DURING SESSION: Josh Kurtz of Center Maryland writes that the 90-day General Assembly session, which kicks off on Wednesday, is intense and exhausting for all 188 lawmakers. But for eight state legislators, the stress level this year will be even higher: They’re in the home stretch for the April 26 primaries, just two weeks after session ends, and will be preoccupied with legislative business while their opponents are on the campaign trail full-time.

MATTHEWS GETS ENDORSEMENTS: Kathleen Matthews’ campaign for the 8th Congressional District picked up several high-profile endorsements on Monday, including two U.S. senators, the Maryland comptroller and a former lieutenant governor, John Fritze reports in the Sun.

MO CO POLICE WON’T AID DEPORTATIONS: Montgomery County Executive Ike Leggett and the County Council on Monday said county police “will play no role” in a federal government operation to deport recent illegal immigrants from El Salvador, Guatemala, Honduras and Mexico, reports Aaron Kraut for Bethesda Beat. Leggett and the nine-member council released a lengthy statement on the issue amid fears in local Hispanic communities that U.S. Immigration and Customs Enforcement raids, such as the nationwide operation over New Year’s Day weekend, could happen in schools, supermarkets or other public places in the county.

BALT. CITY COUNCIL RETIREMENTS: Two longtime Baltimore City Council members said Monday they will not seek re-election, bringing to six the number of council members who do not plan to run this year. Robert W. Curran, who was first elected in 1995, and Rochelle “Rikki” Spector, first elected in 1977, will leave office when this term ends in December. With six of 15 council members not seeking re-election, more than 100 years of experience will leave City Hall next year, Yvonne Wenger and Luke Broadwater report in the Sun.

LIVING IN THE PAST:  Thanks to an eagle-eyed reader for pointing out that we had mislabeled yesterday’s roundup as “2015.”