HOGAN’S POPULAR: Republican Gov. Larry Hogan’s popularity in heavily Democratic Maryland reaches nearly every corner of the state and cuts across party lines, according to a new poll conducted for the Sun and the University of Baltimore, Erin Cox reports.  Less than a year into his term, Hogan’s approval rating among likely voters has soared to 63% and exceeds that of Sen. Barbara Mikulski, typically the state’s most popular politician, the poll found. She is supported by 61% of voters.

BRUNI ON HOGAN: Columnist Frank Bruni of the New York Times does a pretty standard piece by someone from the outside,  and interviews Gov. Larry Hogan over lunch. Of course Bruni is an enjoyable read, but there are no insights here, except on Hogan’s hair. Another positive piece for a national audience. 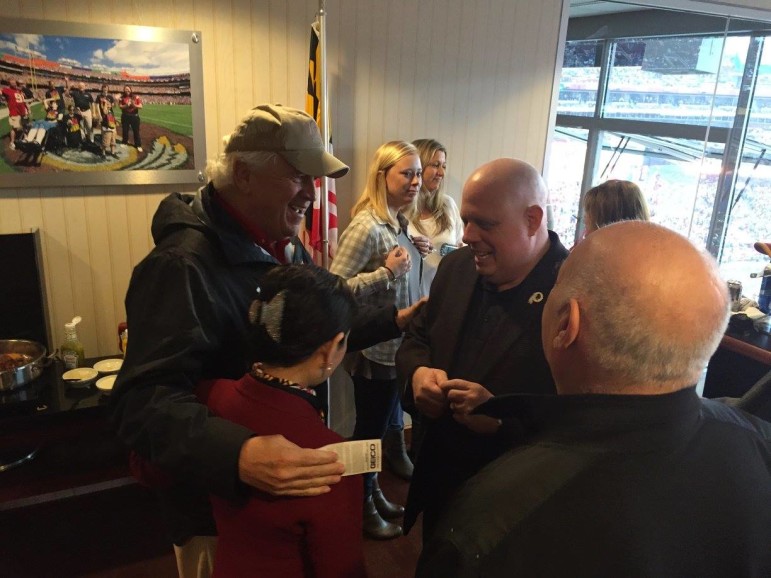 Not only is Hogan riding high, so is the Washington football team, which the governor watched beat the Giants from the state box at FedEx field. Senate President Mike Miller (in hat) visited Hogan and First Lady Yumi Hogan. Photo on the Hogan Facebook page.

BUSINESS, TAXES & BIZ CLIMATE: Some business owners in Montgomery County are wrestling with state taxes and whether their businesses can bear them or whether they should relocate out of state, writes Josh Hicks for the Washington Post. Others however, feel that the business climate is fine and the market is attractive.

INCINERATOR PLAN UNDER FIRE: Maryland environmental officials have sent a stern letter to Energy Answers International Inc., giving the Albany, N.Y.-based company until Dec. 7 to submit proof that its license for the proposed Fairfield Incinerator in South Baltimore has not expired. Fern Shen of Baltimore Brew reports that community and environmental groups were pressing the state to kill the proposed plant, arguing that by allowing more than 18 months to pass without doing any substantial work onsite, the company had let its “Certificate of Public Convenience and Necessity” lapse. State officials appear inclined to agree, judging by the language in the letter.

LESSON IN PARCC RESULTS: With an interactive county-by-county map, Shannon Gallagher of CNS reports in MarylandReporter.com about the PARCC test results, writing that the results showed room for improvement. During the 2014-2015 school year, Marylanders took the exam in three content areas: English Language Arts/Literacy, Algebra I and Algebra II. CNS staff analyzed the state Department of Education data and found six things you need to know about the exam results.

MO CO WELCOMES SYRIANS: Montgomery County Executive Ike Leggett and all nine County Council members told the federal government they will welcome Syrian refugees into the county and that they were “disheartened that many governors have expressed opposition to having Syrian refugees make new homes in their states,” reports Aaron Kraut for Bethesda Beat.

FEAR MONGERING IN THE GOP: Columnist Barry Rascovar, writing for MarylandReporter.com, opines that playing to the public’s worst fears is the thing to do if you’re a Republican politician these days, be it Maryland Gov. Larry Hogan, Donald Trump, Ben Carson, Sen. Marco Rubio or Sen. Ted Cruz. It boosts your poll ratings. Panic-mongering is in vogue inside the GOP.

CARSON ON REFUGEES: After touring Syrian refugee camps in Jordan, Republican presidential candidate Ben Carson on Saturday suggested that camps should serve as a long-term solution for millions, while other refugees could be absorbed by Middle Eastern countries, according to Tribune reports in the Sun.

FREDDIE GRAY TRIALS BEGIN: Kevin Rector of the Sun reports that seven months ago, Baltimore State’s Attorney Marilyn J. Mosby shocked the nation by announcing a range of criminal charges against six police officers in the arrest and death of Freddie Gray. Today, the first of those officers — William G. Porter, a 26-year-old Baltimore native — will arrive at a downtown courtroom to stand trial. The proceedings, which will begin with jury selection, could have significant implications for the city and for the five other officers slated to be tried consecutively over the next several months, experts said.

LAWMAKERS SEEK POLICE LIST: Lawmakers considering how to change policing in Maryland are pushing for an early release of a list of police agencies not adopting state-recommended anti-racial profiling practices, Bryan Sears of the Daily Record writes. The report, which would list law enforcement agencies who have not adopted voluntary standards meant to stamp out profiling on race and other factors, is expected to be released by Attorney General Brian Frosh as early as June. Members of the Public Safety and Policing Workgroup said that is too late for them to act in the coming General Assembly session that begins in January and ends in April.

MIKULSKI SEEKS H-2B SOLUTION: Sen. Barbara Mikulski is trying to come to the rescue of companies that are impacted adversely by new Labor Department regulations for the H-2B visa program, which has allowed foreign laborers to come to the United States for seasonal jobs such as crab-picking and oyster-shucking. But the new regs require better wages, sufficient hours and stricter oversight, Rachel Weiner reports for the Post.

MO CO’S BOOZE BUSINESS: Montgomery County has been in the alcohol business since Prohibition ended in 1933. And business has been very good for Maryland’s most populous county. It makes about $22 million a year as the exclusive wholesaler of adult beverages. But, writes Bill Turque for the Post,  a bill sponsored by Del. William Frick would ask voters to decide, through a referendum on the county’s 2016 ballot, whether establishments that sell alcohol can bypass the liquor control department to buy directly from private distributors. State Comptroller Peter Franchot has said he intends to file similar legislation for the upcoming General Assembly session.

CLINTON COMES TO MARYLAND: Hillary Clinton, the front-runner in the race for the Democratic presidential nomination, will be in Maryland on Dec. 7 for a “conversation” fundraiser at the home of a business executive with ties to Annapolis, reports Rick Hutzell for the Annapolis Capital. Wayne Rogers, former head of the Maryland Democratic Party, will host the former secretary of state at his home in Owings Mills.

SOL-GUITIERREZ SAYS DON’T COUNT HER OUT: Del. Ana Sol-Gutierrez said it is “foolish and premature” to conclude from a recent poll that the Democratic primary race for Maryland’s 8th Congressional District has become a two-person contest between state Sen. Jamie Raskin and former news anchor and Marriott executive Kathleen Matthews, reports Bill Turque for the Post.

PG NOT PC: Magic Johnson was corrected for using it. A county judge once chided a police officer on the witness stand for saying it. And now NBA star Kevin Durant, who grew up in Prince George’s County, is getting side-eye from county officials for putting the moniker on his high-priced new basketball shoe, Arelis Hernandez reports in the Post. Some insiders say it could stand for “Pretty Ghetto” or “Pretty Grim.” (Note from editor Cynthia Prairie: When I worked for the Prince George’s Journal in the 1980s, we were told PG was derogatory because it also meant “pregnant.”)

DIXON’S FUTURE IN BALTIMORE: Political pundit Fraser Smith, writing in the Daily Record, says that Sheila Dixon may stumble into a pantheon of stylish characters who have inhabited Baltimore City’s mayor’s office. Her claim to membership – convicted felon – doesn’t fit the pattern. Many seem to have forgiven her. Many thought she was a good mayor, close to the people. Just the way we like it. She once banged a shoe on her desk in the city council. No one remembers why.