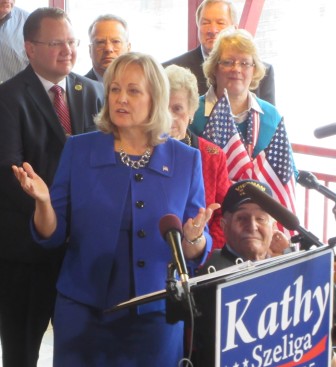 Republican Kathy Szeliga is trying to connect her life story to disaffected and struggling families she hopes will put her in the U.S. Senate next year.

At her formal announcement in Annapolis Tuesday, the House minority whip told a personal tale that contrasted with the poised legislator who jousts with Democrats from her seat in the front row of the House of Delegates.

Surrounded by parents, children, her first grandchild and elected officials, Szeliga, 54, began: “Almost 36 years ago, my husband Mark and I eloped. We had five dollars in our pockets, minimum wage jobs and no car.”

“I think we believed the Beatles: ‘All You Need is Love.'”

Szeliga said she worked putting up drywall, helped build a golf course, worked as a maid, a dishwasher and a waitress, and moved up through management at a resort. Eventually she and her husband started a small construction company, with all the problems that entails with hiring, payroll and “all the government, rules, regulation and taxes that go with running a small business.”

She didn’t go to college till after her children were born, and she graduated with a degree in elementary education from Towson State University at age 32, with her sons watching her walk across the state. “They could see that hard work really paid off,” Szeliga said.

As Anne Arundel County Executive Steve Schuh said introducing her, “She understands the challenges that families and business in Maryland face today.”

In 2010, Szeliga grew concerned with more taxes, fees, regulations and laws, so she ran for the House of Delegates in District 7, that includes parts of both Baltimore and Harford counties.

(Szeliga did not mention her work as chief of staff for then-state Sen. Andy Harris, nor that she managed his congressional campaign.)

She’s running for U.S. Senate because government “has gotten too big, too distant and too gridlocked. Yet D.C. still finds the time to chip away at our liberties, spending more of our dollars while driving up the debt.”

“Our schools have become factories that turn out kids who think their only future is a four-year college. Options like trade schools, the military and specialty training schools are often overlooked and even frowned upon.”

In response to questions from reporters, Szeliga said she was not too conservative to win in a heavily Democratic issues. She’s trying to appeal to voters concerned about jobs and pocketbook issues like rising health care costs.

Szeliga was joined at the announcement by more than a dozen legislators and former legislators.

Asked if Szeliga could win, House Minority Leader Nic Kipke said all the stars have to be aligned for a Republican to win in Maryland.

First, Szeliga must win the Republican primary. Also running are Richard Douglas, a former Pentagon official and Capitol Hill staffer who ran for Senate in 2012, and Chris Kefalas, an attorney who worked in the Ehrlich administration, as are several lesser known candidates.

A new wrinkle in the race is that Republican Harford County Executive Barry Glassman is exploring a run and commissioned a poll showing he could potentially beat Szeliga and the others.

In the general election, the Republican winner is likely to face either Rep. Donna Edwards or Rep. Chris Van Hollen, the most prominent Democrats running for the seat.

Ellen Sauerbrey, a mentor for Szeliga and former House minority leader who ran twice for governor, agreed with a reporter that to win statewide in Maryland as a Republican you need the right candidate and the right message, as Larry Hogan had.