BID PROCESS STARTS FOR NEW FBI HQ: The federal agency overseeing the possible construction of new headquarters for the FBI said Wednesday it has notified the firms selected to bid on the project, and that it remains committed to a consolidated facility despite recent delays. Maryland and Virginia are competing for the 2.1-million square foot project, which would house roughly 11,000 jobs, making it one of the largest federal facilities in either state. John Fritze writes in the Sun that the Obama administration is considering three sites — two in Prince George’s County and one in Fairfax County, Va.

HOGAN POPULARITY UP: Gov. Larry Hogan is deeply popular nine months after taking office, earning high marks from residents who describe him as a “different kind of Republican” and who have watched him battle cancer, a new Washington Post-University of Maryland poll has found, Ovetta Wiggins and Peyton Craighill report. Hogan’s 61% approval rating — up from 42% in February — extends across partisan and demographic lines in a state where registered Democrats outnumber registered Republicans more than 2 to 1. 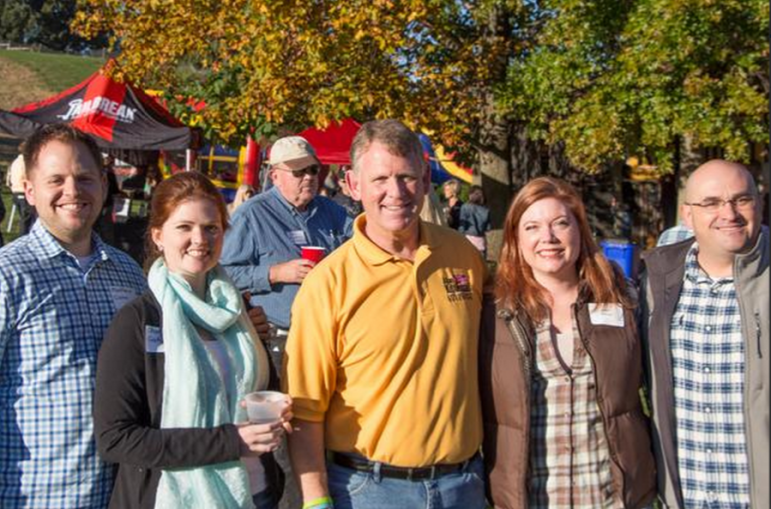 Howard County Executive Allan Kittleman, center, held his annual picnic fundraiser Saturday on the family’s West Friendship farm. Attendance was up 40% to 425 people now that he won the office. “What a difference a year makes,” said his wife Robin Kittleman. “I do love my job,” Allan Kittleman told the crowd. “It’s the greatest job I’ve ever had.”

BED BUGS BITE: About 150 state employees are getting an unscheduled week off from collecting taxes because of an infestation of bedbugs in the state office complex in Baltimore, Michael Dresser reports in the Sun. The comptroller’s office workers were sent home after officials discovered evidence Tuesday that two previous sprayings of bedbugs had failed to eradicate the biting insects. Exterminators were expected to return to 301 W. Preston St. on Wednesday night for a new round of treatments, according to the state Department of General Services.

YUMI HOGAN MEETS KOREAN PREZ: First lady Yumi Hogan was scheduled to meet Wednesday with South Korean President Park Geun-hye in Greenbelt while the leader of Hogan’s native nation is on a three-day trip to Washington. Park is the first woman elected to lead South Korea. Hogan is believed to be the first Korean-American first lady in the United States, writes Erin Cox for the Sun.

HOGAN ENDS CHEMO: Gov. Larry Hogan on Tuesday completed a series of chemotherapy treatments for non-Hodgkin’s lymphoma, undergoing six rounds since he was diagnosed in June, Erin Cox of the Sun reports. In about a month, Hogan will undergo scans to determine the treatment’s effectiveness. The new Republican governor’s executive staff welcomed him back to Annapolis with a governor’s mansion adorned with lime green ribbons, the color used to promote lymphoma awareness. The story is topped by a short video of his return to Government House.

SPORTS MUSEUM OWES STATE $300,000: The Sports Legends Museum, which closed abruptly on Monday at Camden Station, owes the State of Maryland more than $300,000 in back rent and other charges, according to the Maryland Stadium Authority, Ed Gunts report in Baltimore Brew. As of this week, the total figure is $306,745, according to stadium authority Chief Financial Officer David Raith. That includes past due rent, late charges, unpaid utility fees, parking fees and charges related to a sublease to a gift shop, Raith said.

TWEETING ON O’MALLEY: As pundits continue to digest the first Democratic presidential candidates debate, Ian Duncan of the Sun reports that Baltimore’s top prosecutor Marilyn J. Mosby appeared to come to the aid of former mayor Martin O’Malley during Tuesday’s debate when he was pressed on the high-arrest policing style he backed in Baltimore. CNN host Anderson Cooper had used Mosby’s words to question O’Malley about the roots of Baltimore’s unrest this spring.

CAMPAIGN FINANCE REPORTS: Del. Joseline Peña-Melnyk (D-Prince George’s) became the first candidate in a crowded Democratic congressional field to announce on Thursday that she had raised $139,000 in mostly small-dollar donations during a slow third quarter fundraising period, Arelis Hernandez reports for the Post.

GREEN PARTY RISING? John Fritze of the Sun writes that, after not fielding a candidate for statewide office in Maryland for two election cycles, the state’s Green Party appears to be lining up behind a Baltimore pediatrician-turned-advocate for the state’s open Senate seat. Dr. Margaret Flowers, who left medicine in 2007 to advocate for a single-payer health care system, is so far unopposed for her party’s nomination

SCHUH PULLS POT BAN: The proposed ban on medical marijuana operations in Anne Arundel County is off the table, Rema Rahman reports for the Annapolis Capital. County Executive Steve Schuh is backing off his bill to prohibit the growing, processing and distributing of medicinal cannabis locally. He’s now offering amendments supported by four members of the County Council.

AA SHERIFF SWITCHES TO GOP: For the first time in more than two decades, the Anne Arundel County sheriff’s office will be led by a member of the GOP — right after he switches parties, Rema Rahman reports for the Annapolis Capital. Ron Bateman, who was re-elected to a third term in November, was to announce yesterday his plans to change his political affiliation from Democrat to Republican. That sounded a sour note with Maryland’s blue party — which leads the General Assembly — but invigorated those on the right who said they actively seek to secure control at the local level.