RIGHT TO DIE ADVOCATES: Erin Cox is reporting in the Sun that, bolstered by a victory in California this week, “death with dignity” advocates in Maryland have renewed their push to allow terminally ill patients to use a prescription drug to end their lives. “As with gay marriage, there is a wave,” said Del. Shane Pendergrass, a committee vice chairman and leading advocate of passing right-to-die legislation in Annapolis next year.

GERRYMANDERED MESS: Officials and the public agreed that Maryland’s election districts are a gerrymandered mess, and told the Maryland Redistricting Reform Commission so at a public meeting Sept. 29 at the Charleston Senior Center in Waldorf, Christopher Ullery reports for the Calvert Recorder.  The commission, formed by an Aug. 6 decree by Gov. Larry Hogan, has as its primary focus to visit several regions in Maryland in September and October to hear from voters and elected officials about the current legislative and congressional voting district maps in the state, what Hogan’s office called “some of the most gerrymandered districts in the country.” 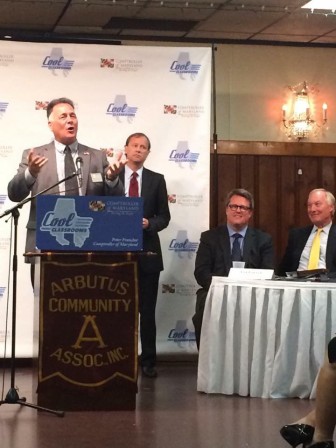 KAMENENTZ THROWS DOWN GAUNTLET: The war of words between Baltimore County Executive Kevin Kamenetz and state officials in Annapolis over a lack of air conditioning in dozens of county public schools escalated again Tuesday, Pamela Wood reports in the Sun. “If the state really wants to help us … they need to take money in future years and advance it, or accelerate it, so that together we can all get the job done sooner,” Kamenetz said. That drew quick response from the Hogan administration, with spokesman Doug Mayer saying: “It’s nearly impossible to respond substantively to budget proposals that are delivered to the press before they are delivered to the Governor’s Office.”

FIXING THE TAX CODE: The editorial board for the Frederick News Post addresses the recent Moody’s report on the state of Maryland’s economy and urges Maryland to begin making changes to the tax code to make it more competitive with its peer states. It writes, “Maryland isn’t dead in the water by any means, but when it comes to things such as venture capital investment, the Free State is just treading water.”

MICA ADJUNCTS UNIONIZE: The national movement to unionize part-time faculty at U.S. colleges and universities has secured an initial beachhead in the Baltimore area with ratification of a first contract between Service Employees International Union Local 500 and the Maryland Institute College of Art, Bruce Vail reports for In These Times. Voting on the ratification concluded in mid-September and a formal signing ceremony for the pact is set for Oct. 8, labor representatives report.

ARUNDEL HOLDS OFF ON SUPPORT: Rema Rahman of the Annapolis Capital reports that neither Chris Van Hollen nor Donna Edwards have seen a groundswell of financial support from Anne Arundel County residents as the two Democratic congressmembers seek to take U.S. Sen. Barbara Mikulski’s seat.

SPEAKING WITH WAYNE GILCHREST: James Dissette of the Chestertown Spy interviews Wayne Gilchrest, former Republican congressional district representative. Gilchrest spent 18 years serving Maryland’s 1st district and was defeated in the Republican primary by Andy Harris as the country edged toward the new and fractious conservatism.  After his defeat, Gilchrest remained true to his lights as a moderate and backed the Democratic candidate. A quote from Wiki states Gilchrest as saying, “Let’s see, the Republican Party, or my eternal soul?” and “Party loyalty, or integrity?”

POLITICAL TEASES: Josh Kurtz of Center Maryland offers up a history of Maryland’s “political teases,” those politicians who remain on the scene testing the waters here and there as they try to figure out their next moves. He starts off with U.S. Rep. Dutch Ruppersberger.

LITTLE SUPPORT FOR O’MALLEY IN MD: Democratic presidential hopeful Martin O’Malley has made no headway in his home state, according to a new poll, which shows that only 2% of Maryland Democratic voters would support the former governor, writes John Wagner of the Post.

HIGH TAXES & BALTIMORE’S POPULATION LOSS: What to do about Baltimore’s high taxes? Len Lazarick of MarylandReporter.com writes that it is an old question perplexing Maryland political leaders, but with new urgency. And there have been precious few new answers. Fifty years ago, more than 900,000 people lived in Baltimore, a third of the population of Maryland. Over that half-century, that population has gone down by a third to 622,000, meaning almost as many people left Baltimore as live in all of Howard County today.

AUDITING BALTIMORE: Baltimore’s spending board is set to authorize another $600,000 to hire firms to audit four key city agencies. The Board of Estimates is expected to approve today spending the money for audits of the city’s fire, information technology, general services and housing departments. The city has already spent more than $400,000 to audit the transportation, recreation and parks and finance departments. Those are among 13 agencies that must be audited by the end of 2016, Luke Broadwater of the Sun is reporting.

PESTICIDE BAN IN MO CO: Montgomery County became the country’s first major locality Tuesday to ban the use of cosmetic pesticides on private lawns, concluding that time-honored right of suburbanites to maintain pristine green, weed-free yards was superseded by a body of scientific evidence linking the widely-used products to cancer, Bill Turque reports for the Post.

FIREARM REGS CONSIDERED IN ARUNDEL: The Anne Arundel County Council debated a host of issues at its biweekly meeting Monday, including reporting regulations for secondhand firearm dealers and who has the authority over people’s animals, writes Rema Rahman for the Annapolis Capital.