LEGISLATING A SECURE RETIREMENT: Top leaders of the General Assembly launched a new legislative effort to establish retirement security plans for more than a million Marylanders who would otherwise rely entirely on Social Security in their old age, writes Michael Dresser for the Sun. Senate President Mike Miller and House Speaker Michael Busch announced the formation of a Commission on Maryland Retirement Security and Savings at a State House news conference attended by U.S. Secretary of Labor Tom Perez.

1st REDISTRICTING REFORM MEETING: Pamela Wood of the Sun reports that as the state’s redistricting reform commission held its first meeting at Towson University on Tuesday, co-chairman Alexander Williams Jr. noted that the group was sitting in Maryland’s 3rd Congressional District. Yet other parts of the Towson campus, Williams said, are in the 2nd Congressional District.

BUNGLING THE POLITICS: The editorial board for the Sun opines that voters elected Gov. Larry Hogan on the promise that he would make state government more efficient, and quite likely  assumed he would reorganize departments, streamline operations and probably even eliminate some state workers. Unfortunately, the Hogan administration bungled the politics of its first real attempt at such a reorganization.

RX POT GROWER TARGETS HANCOCK: Steve White said Tuesday his company’s goal of establishing a medical-marijuana growing operation in Maryland “will be Hancock or not at all.” CJ Lovelace of the Hagerstown Herald Mail writes that the chief executive officer of Harvest Inc., a firm with medical cannabis licenses in three other states, spoke to Washington County officials, formally expressing interest in starting a cultivation and production facility in the western county town.

SALT STORAGE FACILITY: A week after a crowd packed a meeting to oppose a proposed 10,000-ton salt storage facility in Davidsonville area legislators have asked Gov. Larry Hogan’s for help, Pat Furgurson reports in the Annapolis Capital. Arundel County Councilman Jerry Walker and Del. Sid Saab sent letters asking Hogan for assistance to find a more suitable location for the State Highway Administration road salt storage barn than the strip of farmland next to the intersection of Route 50 and Davidsonville Road.

HOGAN SAYS O’MALLEY ‘MISLEADING’ ON FURNITURE: Gov. Larry Hogan on Tuesday accused Democratic presidential candidate Martin O’Malley of “misleading” Marylanders about O’Malley’s removal of furniture from the governor’s mansion in Annapolis, saying the former governor never told him about plans to take items with him when he left office, Michael Dresser reports in the Sun. Hogan then said the account O’Malley gave the Washington Post about his decision to move some items to his home in Baltimore was “absolutely blatantly false.” 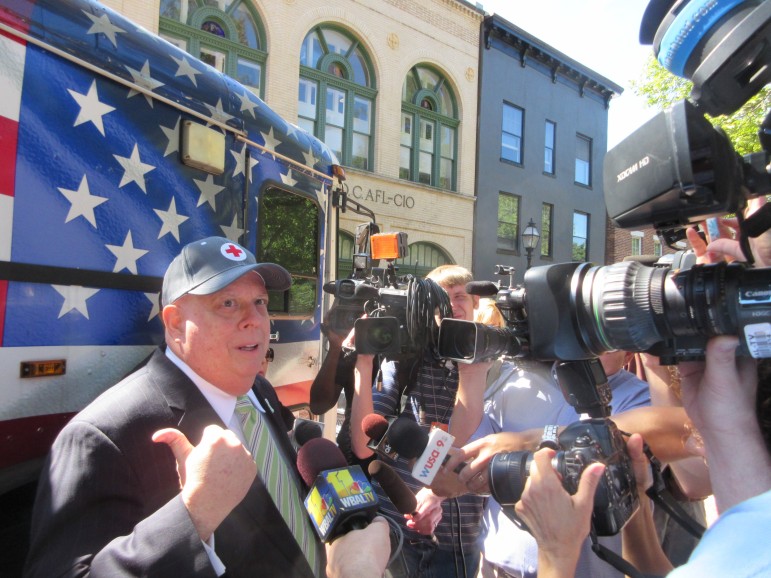 In the street outside Government House, the governor’s mansion, Gov. Larry Hogan was trailed by cameras as he promoted a blood-mobile van also collecting bone-marrow donor registrations. Under chemotherapy for lymphatic cancer, Hogan told MarylandReporter.com he was feeling good, but agreed that he hadn’t lost any of the weight he had expected. In fact, he said he “gained 20 pounds” due to the steroids he was taking that have bulked him up and given him a “ravenous” appetite. It was the same steroids that bicycler Lance Armstrong took, he said, but he wouldn’t qualify for the Olympics. Asked what Olympic event he could compete in, Hogan laughed: “The pie-eating contest.”

LATE, O’MALLEY ON REHM SHOW: Martin O’Malley, a former two-term governor of Maryland, talks about his bid for the 2016 Democratic presidential nomination, and why he believes his positions on issues like climate change, immigration and gun control offer voters critical choices, with Diane Rehm of WAMU-FM. Rehm begins the program by chastising O’Malley for not making it to her studio on time.

COMMISSIONER WON’T SEEK RE-ELECTION: Carroll County Commissioner Doug Howard announced Tuesday he will forego running for any elected office once his term as commissioner expires in 2018 so he can focus on several issues he identified a crucial that he and the other commissioners will need to resolve over the next three years, Wiley Hayes reports for the Carroll County Times.