MDE SHORE CLEAN TEST COULD BE CHALLENGED: Dan Menefee of the Kent Guardian writes that Chestertown’s utilities manager has recommended legal action if Maryland Department of the Environment allows Shore Regional Health to proceed with an experimental oil clean up plan at Chester River Hospital, without first providing a financial guarantee to protect the town’s drinking water supply. The plan approved by MDE is an attempt to clean up the remains of an old heating oil spill that occurred at the hospital in the late ‘80s.

PRINCE OF DARKNESS REVISITED: For those who wondered whatever happened to Joe Steffen, the Prince of Darkness in Ehrlich administration, Bryan Bernbaum of the Baltimore Post-Examiner did an interview of the blogger and writer who is still active in GOP circles.

CUMMINGS SEEKS INFO ON PLANNED PARENTHOOD FOE: Rep. Elijah E. Cummings on Thursday requested financial documents from an anti-abortion rights group that secretly filmed Planned Parenthood officials and set off a controversy about the use of fetal tissue for medical research, John Fritze reports for the Sun.

Rating U.S. Senators from most liberal to most conservative: Mikulski 12th most liberal, Cardin 17th (Voteview) Double click to enlarge. 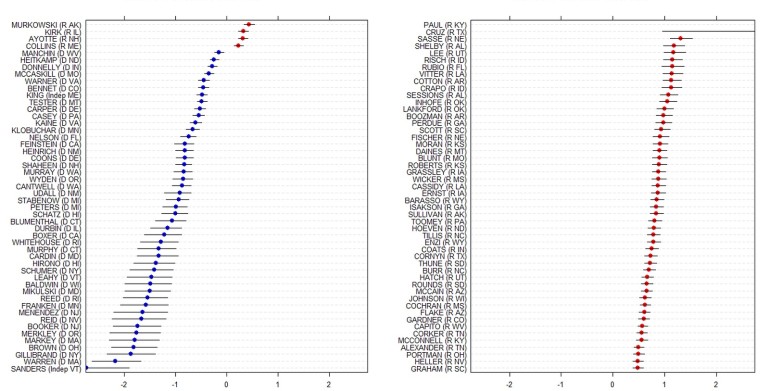 From David Lublin’s Seventh State blog: The graph shows the latest scores to be released by Voteview. Unlike conventional interest group ratings, they take into account all votes in the Senate (except those in which less than 5% of the Senate dissented from the majority). The points show the estimates on the scale with most positive being more conservative. The lines around the points are 95% confidence intervals (i.e. the actual ideology of the senator has a 19 in 20 probability of falling on the line). Presidential Candidates Bernie Sanders is the most liberal member of the Senate. Rand Paul and Ted Cruz are literally off the charts as the two most conservative senators. Fellow Candidate Marco Rubio is the seventh most conservative while Lindsey Graham is the fifth most liberal.

O’MALLEY SHADOWED BY ZERO TOLERANCE: Jason Zengerle of GQ magazine writes about the Martin O’Malley’s difficult run for the president. If facing Hurricane Hillary weren’t enough, he’s now discovering that the very thing that once made him seem presidential suddenly threatens to ruin him.

O’MALLEY WANTS SOC SEC EXPANDED: Democratic presidential candidate Martin O’Malley reiterated his call to expand Social Security for millions of Americans, offering new detail about his goal to improve the financial security of retirees, writes John Fritze for the Sun.  Working to distinguish himself from frontrunner Hillary Clinton — who has so far approached the issue more gingerly — O’Malley said in a policy paper released by his campaign Friday that he would increase benefits and reject calls to raise the retirement age.

FROSH TO CAMPAIGN FOR O’MALLEY: John Fritze writes that Attorney General Brian E. Frosh will campaign for Martin O’Malley in his presidential bid at a house party in New Hampshire on Sunday. Frosh, according to the O’Malley campaign, “will highlight Governor O’Malley’s progressive record of getting things done.”

WILD ANIMAL CRUELTY BILL: Rema Rahman of the Annapolis Capital reports that next month, the seven-member Anne Arundel County Council is slated to vote on a measure to prohibit cruelty against elephants. Maybe tigers and bears, too.

PRINTER MALFUNCTION HALTS HOME CLOSINGS: A Baltimore City Councilman is calling for changes after a specialized printer in Baltimore’s finance department broke down, bringing the city’s residential real estate market to a temporary halt.  “This breakdown resulted in a backlog of over 1,000 lien certificates, and brought the City’s real estate market to a grinding halt,” Councilman Eric Costello wrote. “This impacted several of my constituents in Bolton Hill and Druid Heights, who had to postpone their closings and scramble at the last minute to acquire all of their documentation in order to close on rescheduled dates. In one case, this malfunction endangered the prospective home buyer’s financing.”

MUGGING VICTIM TO RUN FOR MAYOR: Connor Meek, the 27-year-old whose opinion piece in the Baltimore Sun about police stations being closed led to policy reversal and heavy press coverage, has filed to run for mayor. Meek this week filed as an unaffiliated candidate for mayor, meaning he will need to gather more than 4,000 signatures from registered voters in Baltimore to get on the ballot for the general election, writes Luke Broadwater in the Sun.

TAX BREAK IN ALLEGANY: Hundreds of Allegany County homeowners will get a tax break the next time property tax assessments skyrocket, as they did in the mid-2000s, reports Matthew Bieniek for the Cumberland Times News. Higher assessment mean higher taxes, but a new county law Allegany County Commissioners passed Thursday will aid those hit the hardest by tax increases. The new law changes an existing tax credit. The new credit will kick in when the assessed value of a home increases by 4 percent, instead of the current 7%.

DELAUTER & NEW CONTRACT LAW: Frederick County Councilman Kirby Delauter says his private company will no longer donate to charitable organizations in the county while he is in office, Jen Fifield reports for the Frederick News Post. The company no longer has the money for the contributions, Delauter said, because of a bill the County Council passed Tuesday.

MITCHELL WAS AN ACTIVIST: WYPR-FM’s Fraser Smith speaks about Dr. Keiffer Mitchell Sr., who died over the weekend. His family is filled with civil rights activists whose work allowed him to become a doctor. In his own way, says Smith, Mitchell was an activist as well.