FRACKING MONITOR TO BE INSTALLED: Given that seismic activity is rare in the ancient rock of the Appalachians — and damaging earthquakes even rarer — there is only a single apparatus measuring underground rumblings within Maryland borders. But geologists are about to put another ear to the ground. Scott Dance is reporting in the Sun that the Maryland Geological Survey, anticipating the possibility that hydraulic fracturing, or “fracking,” for natural gas in the Marcellus shale deposits could increase seismic activity, plans to install a seismometer in Western Maryland. 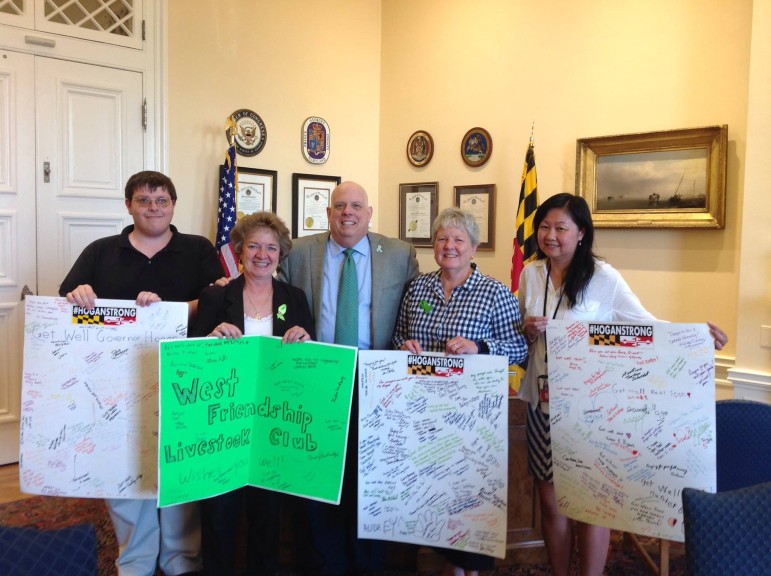 Gov. Hogan has been getting get well cards from all over the state. These were hand delivered from last week’s Howard County Fair. From left: Matthew Arnold, Howard County GOP chair Loretta Henriksen Shields, Hogan, Sen. Gail Bates and Deborah Ing. (From Bates Facebook page.)

CAUTIOUS, OPTIMISTIC: Medical experts said Wednesday that cancer patients who experience the kind of progress Maryland Gov. Larry Hogan (R) has made during his initial rounds of chemotherapy should be encouraged, writes Ovetta Wiggins for the Post. But they also cautioned those who might think that they are out of the woods.

POT WORRIES MANUFACTURERS: More and more of the state’s manufacturers have been asking how loosening marijuana laws affect them, said Mike Kelleher, CFO of the Maryland Manufacturing Extension Partnership, a nonprofit group that works to improve the state’s manufacturing base. They’re worried employees could show up to work under the influence. The fear is that stoned employees could cause lost productivity, damages or, in the worst-case scenario, injury as they operate heavy machinery. The bottom line is that manufacturers can still enforce strict drug-free policies, Rick Seltzer reports for the Baltimore Business Journal.

SKEPTICAL ON DEMS’ REDISTRICTING STANCE: Todd Eberly, writing in his FreeStater blog, says that in response to Gov. Larry Hogan’s call for redistricting reform, Democratic members of Maryland’s congressional delegation have argued instead for national reform. He continues “Nothing would please me more or be better for our democracy than national reform. But forgive me for not placing much stock in Md Democrats’ new found redistricting faith. Rather I think they are calling for national reform in an effort to provide cover for state Democrats who don’t want to give up the power pick and choose their voters. Why am I so dismissive? Let’s just say our Democratic delegation sang a different tune when their party controlled Congress AND the White House a few years ago and had the power to enact reform.”

HOLT NEEDS TO GO: Laslo Boyd of Center Maryland makes the case that following his speculation that a mother could poison a child to gain a housing advantage, Housing and Community Development Secretary Ken Holt needs to be replaced, writing, “However you look at his statement, it’s a stunning combination of irresponsibility, incompetence and stupidity.  How could a cabinet secretary so totally disregard decades of evidence about the dangers of lead paint poisoning, the mission of his own department, and the most minimal standards of common sense?”

MICROBREWERIES IN CECIL: Cheryl Mattix of the Cecil Whig writes that Cecil County Liquor Board Chief Inspector Earl Bradford told the county council Tuesday that he will be requesting a new county law during the 2016 General Assembly to legalize microbreweries here. “We’re the only county in the state that doesn’t allow micro-breweries,” he said. “Interest has grown in the last two years.” The longtime liquor board inspector says he’s been seeing an increased demand for that type of license.

UNIFIED LEGISLATIVE FRONT IN FREDERICK: When Frederick County Executive Jan Gardner pushes for new laws during Maryland’s next legislative session, she wants to have the support of the County Council and the community behind her. Gardner has set up a process to gather input over the next three months before she decides what the county’s legislative priorities should be in the next General Assembly, which convenes Jan. 13. It’s the first time the county will attempt to present a united front to the delegation with its new form of charter government, which split executive and legislative powers, Jen Fifield reports for the Frederick News Post.

CRABS AND BAY HEALTH:  We’re closing on 40 years since William Warner, a New York-New Jersey boy, awakened us Chesapeake natives to the fascinating commerce, ecology and sociology attached to Callinectes sapidus, that beautiful swimmer, the blue crab, writes Tom Horton of the Bay Journal for MarylandReporter.com. Crabs, even in today’s reduced numbers, are still the Bay’s last great fishery. Both Maryland and Virginia have recently put the tools in place and have the science to harvest crabs sustainably.

FROSH ON MARYLAND LAWS: Dan Rodricks hosts state Attorney General Brian Frosh to discuss a slew of issues affecting Marylanders such as: When a spouse in a same-sex marriage cheats, what’s the potential legal impact on the union under Maryland law? Are communities entitled to know when shipments of crude oil are scheduled to move through their neighborhood on railroad lines? Why is the price of the heroin overdose drug naloxone so high, and what can be done by state officials to lower it?

PRISON POPULATION DECREASE: Maryland’s prison population had decreased over the last decade, mostly driven by a 30% drop in the number of people incarcerated in Baltimore City. The numbers were part of a presentation made to a state panel charged with looking at reducing costs by further cutting the state prison population, report Bryan Sears for the Daily Record.

CUMMINGS HIRES SENATE FUNDRAISER: A veteran Senate campaign fundraiser is now working for Rep. Elijah E. Cummings (D-Md.), a potential sign that he will run for higher office, Rachel Weiner reports in the Post. Ashley Martens is organizing a fundraiser next month at a Nationals-Orioles game in Washington, D.C., asking for $1,000 to $5,000 contributions to Cummings’s political action committee. Cummings is not known as a particularly large fundraiser. However, he has significantly more money in his campaign account than Rep. Donna Edwards (Md.), one of two Democratic candidates currently running to replace retiring Sen. Barbara A. Mikulski.

O’MALLEY AT TRUMP HOTEL, PROTESTING: Democratic presidential candidate Martin O’Malley took a swipe at Republican Donald Trump on Wednesday by standing with employees who are trying to organize a union at the billionaire’s hotel in Las Vegas. “There are a couple of things Donald Trump doesn’t understand,” O’Malley said, according to Politico. “If we want our economy to grow, we need to treat our workers with dignity and respect, pay them better and respect their right to organize.”

SYMBOLIC ROLL-BACK: The editorial board for the Frederick News Post opines that while life before the repeal of the county’s English-only ordinance and life after it won’t be substantially different, just as life before the enactment of this pointless and mean-spirited ordinance and the time up to Tuesday night’s repeal will be pretty much the same. But the point of why it was created was never meant to be any meaningful contribution to the functioning of the county’s seat of power.

FREDERICK CUTS EMISSIONS: Frederick County government has reduced carbon dioxide emissions by more than 10% in five years and is on track to meet a goal to see a 25% reduction by 2025, according to a new report. According to information provided by the county, its internal emissions — generated chiefly by energy use in county buildings, waste practices and its vehicle fleet — declined about 10.5% from 2007 to 2012, Sylvia Carignan reports in the Frederick News Post.