HOGAN TOUTS CHARTER SCHOOLS: Gov. Larry Hogan defended his funding of education Thursday while also declaring that “our children deserve better” than the school options available to them, the Baltimore Sun reports. The new governor is pushing for expansion of charter schools by loosening rules that some say hamstring innovation and for tax benefits of up to $200,000 for businesses that donate to private and public schools.

It was standing room only and floor seat as well for the four-hour hearing in the House Ways & Means Committee hearing on Gov. Hogan’s charter school legislation Thursday.

SCHOLARSHIP DONOR TAX CREDIT: Gov. Larry Hogan on Thursday urged the Democratic leader of the House of Delegates to allow a floor vote on a proposal that would give tax credits to corporations that help fund private and public school scholarships. The bill has been introduced three times in the past four legislative sessions, Ovetta Wiggins of the Post reports.

TESTING IN SCHOOLS: An unusually bipartisan group of 39 Maryland lawmakers, lead by a freshman delegate who is a veteran high school math teacher, is calling for reconsideration of Maryland’s use of standardized testing in public schools, reports Rebecca Lessner for MarylandReporter.com.

ROCKY ROAD: Senate President Mike Miller predicted Wednesday that Gov. Larry Hogan’s nominee to head the Maryland Higher Education Commission could face a rocky confirmation process, reports Michael Dresser in the Sun. Miller did not elaborate on the reasons that Jennie C. Hunter-Cevera could face problems in her confirmation as higher education secretary.

ARMED POLICE IN SCHOOLS: The president of the city school police union says that being a good protector of students means having immediate access to your weapon. Clyde Boatwright was one of more than 40 current and retired school police who came to school system headquarters in support of a state bill  that would allow Baltimore City School Police to carry their guns in school buildings, Danielle Sweeney reports in Baltimore Brew.

POLICE BRUTALITY: Civil rights advocates and families of alleged victims of police brutality urged state lawmakers Thursday to improve law enforcement accountability, saying Maryland is not immune to widespread concerns about the use of excessive force by officers, reports Timothy Wheeler of the Sun.

INSIDE BASEBALL: How do you get Orioles manager Buck Showalter to quit sunny Sarasota, Florida, on the first week of spring training to come to Annapolis on a snowy Thursday and address an aging group of senators, ex-senators and their friends? Len Lazarick writes in MarylandReporter.com that you get longtime Orioles owner Peter Angelos to fly him up on a charter jet, put him in a suit and tie, and make it look like it was the most normal thing in the world for this Mississippi boy to schmooze and pose for pictures with a bunch of pols.

POACHED FISH: Catherine Rentz of the Sun writes about the two Tilghman Island men convicted of rockfish poaching after Department of Natural Resources police nabbed their nets with 10 million pounds of the delicacy in 2011. She talks with the two men and community members as one gets ready to go before a judge today for sentencing. Appropriately, Barbara Haddock Taylor shot the photos.

ENCOURAGING RETIREMENT SAVINGS: The editorial board for the Carroll County Times opines that giving people tax breaks on money that they save for their retirement would help ensure that more older Americans are able to meet their needs after leaving the workforce and would decrease the amount of money that otherwise will have to be spent on social programs aimed at assisting them.

HOGAN’S HEROIN PROBLEM: Gov. Larry Hogan’s strategy to combat heroin addiction and overdoses is prompting understandable cynicism from some who have long been involved in the issue, opines the editorial board for the Sun. Hogan has now made a big deal out of doing more or less what the state was already doing and it’s possible to read a racial undercurrent into the way the governor has embraced the issue. But all that skepticism misses the point, which is that the governor has now very publicly identified himself with this problem.

ASSEMBLY UPDATE: Marc Steiner of WEAA-FM hosts Bryan Sears, of the Daily Record, and Charles Robinson,of Maryland Public Television, to talk about executive privilege, freedom of information and other issues in the General Assembly, including armed police officers in public schools.

JALISI HEARING: A freshman delegate from Baltimore County is expected to be in court Monday related to a domestic violence protection order filed against him, reports Bryan Sears for the Daily Record. When approached before a committee hearing Thursday, Del. Jay Jalisi, D-Baltimore County, said he had no knowledge of the civil protection order and the scheduled March 2 hearing. Jalisi won the Democratic primary last year and later faced questions about his residency.

FROSH BACKS CARROLL CENTRAL COMMITTEE: A party central committee has “sole discretion” to choose how many names to submit to the governor to fill a General Assembly vacancy, Maryland’s attorney general told the state’s top court Thursday. Steve Lash of the Daily Record reports that Attorney General Brian Frosh weighed in as the Court of Appeals considers whether the Republican Central Committee of Carroll County acted unconstitutionally in acceding to Gov. Larry Hogan’s demand for additional names after he rejected the committee’s first choice for a GOP Senate seat.

GILL PROFILED: In a cover story for the Baltimore Business Journal, Rick Seltzer profiles Mike Gill, the new secretary of the Department of Business and Economic Development.

BIG HEADS & CHERRY STEMS: Senate President Mike Miller, an alum of the University of Maryland, attended the recent Terps game accompanied by Gov. Larry Hogan. But it was not the Senate President’s physical presence that caught Sen. Brian Feldman’s attention. Feldman, who also was attending the game, couldn’t get away from the big head shots that students were waving about, writes Bryan Sears for the Daily Record.

MIDDLE SKILL JOBS: Almost 36,000 new job hires for key middle-skill occupations are expected in the Baltimore region by 2020, according to a new study gauging occupational training opportunities in the region. Don Fry of the Greater Baltimore Committee writes in Center Maryland that emerging middle-skill jobs, coupled with effective workforce training strategies, could take a significant bite out of the region’s current unemployment level of 105,000 workers and offer existing low-wage workers with less than a four-year college degree an opportunity to move into jobs that pay a living wage.

HOYER CALLS COLLEAGUE ‘COWARD:’ In an exchange that underscored the partisan rancor surrounding the debate over Homeland Security funding, U.S. Rep. Steny Hoyer was heard calling a top GOP official a “coward” on the House floor on Thursday. John Fritze of the Sun reports that the comment by the Southern Maryland lawmaker and No. 2 Democrat in the House was picked up by an open C-SPAN microphone during an exchange with Republican Rep. Kevin McCarthy, the House Majority Leader.

CECIL BUDGET: The Cecil County Council took a critical look Tuesday morning at about $1.2 million in county department expenses above budgeted amounts for the fiscal year that ends June 30, writes Cheryl Mattix for the Cecil Whig.

DON’T KNOW ‘NUFF: If there is any good news for former Gov. Martin O’Malley in the latest poll out of Iowa, it is this: More than eight out of 10 likely participants in the state’s  2016 Democratic caucuses don’t know enough about him to say whether they view him favorably, John Wagner of the Post reports. 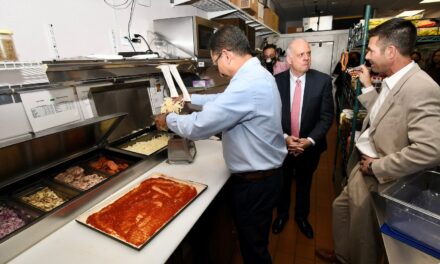