Photo above: Legislators get a budget briefing in the Joint Hearing Room Monday.

In his two-hour briefing, Warren Deschenaux, the legislature’s chief fiscal analyst, also called a proposed 2% across-the-board, unitemized cuts “a very dangerous approach to budgeting” that sets “a bad precedent.” (Click here for full text of the briefing. You can also watch the briefing online.)

Overall, the Hogan budget increases spending by only 1% and uses fewer fund transfers and gimmicks to balance the budget than in past years. But it does use $184 million in transfers, including $100 million borrowed from local piggyback income tax collections that will be repaid the following year.

“This is as clear-cut a gimmick as I have ever seen in a budget,” Deschenaux said, though it’s a tactic that has been used in some form in other recent budgets.

The budget actions by Hogan will solve the lingering structural deficits for the next three years, but only if the legislature approves dozens of changes in laws that will shift revenues, transfer funds and restrain mandated spending.

“If you do everything the governor asks … revenues will exceed expenditures” until 2018, Deschenaux said.

Long-term, the Hogan plan caps increases in school spending at 1% a year and it reduces spending growth for other formulas to 1% less than the percentage growth in general fund revenues, what Deschenaux described as “a quite clever” proposal that “prevents spending growth.”

The Hogan plan also expects college and university tuition to rise 5% next year, and 4% annually after that.

State employees not only will have to hand back this year’s negotiated 2% raise, but are assumed to get no cost-of-living increases in following years.

Hogan’s forecast also assumes no tax cuts, although the governor has pledged to fulfill his campaign promise to roll back as many of the O’Malley tax hikes as he can. He even said last week he will propose some tax cut this year.

Budget Secretary David Brinkley said the 2% across-the-board cut at state agencies was simply a continuation of the action taken by Gov. Martin O’Malley at the Board of Public Works on Jan. 7, when he made $400 million in cuts to balance this year’s budget.

Brinkley said this 2% trim will allow the new cabinet secretaries to assess the best places to make cuts. But Deschenaux said that approach doesn’t allow the legislature to see where the departments are cutting.

“You need to see what you’re doing,” he said.

“Some of these education cuts scare me,” said Del. Ben Barnes, D-Prince George’s, saying they could represent a loss of 600 teachers.

State aid to all the counties, the bulk of it for schools, goes up only $30.5 million, 0.4%, to $7.051 billion. This is some of the “tough medicine” Hogan talked about after the election.

Brinkley said the budget plan is “all about a conversation” and represents the start of a dialogue with the legislature on spending. 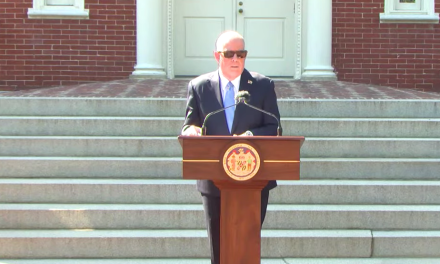 Elrich: ‘If your excuse was you did not want to take an experimental vaccine, that excuse is gone’