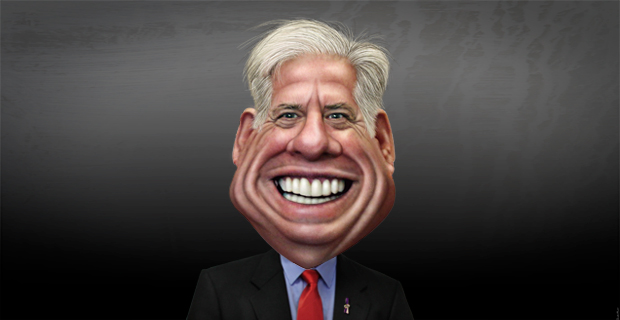 How the heck did this happen?

At noon, a 58-year-old real estate developer with no previous experience in elected office, a bit of a paunch and a lifelong involvement in Republican politics will be sworn in as Maryland’s governor.

To get there he had to beat a younger, leaner Democrat with two Harvard degrees, 30 years of military service including a stint in Iraq, 16 years in elected office, five times as much money, and the backing of the entire Democratic establishment, including his chief patron, the current governor getting ready to run for president.

What got Larry Hogan to the place where he raises his right hand for the oath as governor is what one Hogan insider concedes was a perfect storm. The right political environment, a message to match it hatched by the candidate himself, a campaigner disciplined enough to communicate it relentlessly, and a campaign that made few mistakes and profited from the lackluster campaigns and mistakes of his competitors.

The political environment had markedly shifted in Maryland from 2010 when Gov. Martin O’Malley won re-election with 56% of the vote, easily beating Gov. Bob Ehrlich for a second time. Hogan, who served under Ehrlich as appointments secretary, had explored that race, but deferred to his old boss.

O’Malley had already won passage of large tax increases in 2007, but in the midst of the recession that had begun in 2008, Maryland was doing better than the rest of the country due to the infusion of federal dollars.

In 2013, sequestration hit, causing federal budget cuts followed by a shutdown of the federal government in October 2013.

Job growth slowed, and by 2014, Maryland’s unemployment was higher than the national average. Maryland had the highest median household income in the country, but as O’Malley pointed out in his group exit interview Friday, there has been “prolonged wage stagnation or decline…. Most people are feeling that this economy isn’t working for them.”

In 2013, O’Malley had also finally won the increase in the gas tax he had long sought to replenish the depleted Transportation Trust Fund. The legislature passed what came to be known as “the rain tax,” forcing nine counties and Baltimore City to levy a separate charge to fix stormwater runoff polluting the bay.

“The rain tax” revenue didn’t even go to the state, but it was widely mocked as government overreach.

In a long interview with MarylandReporter.com at that time, Hogan said: “A lot of people are not happy with the direction of this state. Some businesses have closed and left the state. Others have just given up.”

“This is really not about Republicans and Democrats. It’s about people who believe we ought to have more common sense in Annapolis, and who want lower spending and lower taxes. It’s not a fight about the right and the left; it’s more about the difference between right and wrong.”

This all may sound very familiar, because Hogan’s message in 2011 was the same message he had in the campaign of 2014.

Over those years, the message was beefed up with research by consultant Jim Pettit. Using IRS data, the research showed that indeed businesses and taxpayers were leaving the state. Later research documented the number of taxes, tolls and fees raised during the O’Malley-Brown administration. By 2013, it came to 40 taxes, tolls and fees. On the campaign trail, Hogan shortened this to 40 consecutive tax increases, another consistent message in the campaign.

Change Maryland started with 2,000 friends on its Facebook page, and grew to over 100,000. It held business summits, raised money, and Hogan quietly toured the state speaking to groups with the same message, always appealing across partisan lines.

Above: The June 2011 video about Change Maryland.

Hogan would often emphasize during the campaign that he was not a career politician. It wasn’t for lack of trying.

At 24 in 1981, he ran for Congress in a special election to fill a vacant seat which was eventually won by Democrat Steny Hoyer. In 1992, he ran for the seat again as the Republican nominee against Hoyer, then seeking his seventh term. Hogan got 45% of the vote, and has long taken pride in saying that it was the highest percentage any Hoyer challenger had ever received, a record that still stands.

He was a political practitioner from a young age, following in the footsteps of his father Larry Hogan Sr.

Larry Jr. was on the floor of the U.S. House of Representatives in 1969 when his father was sworn in, and the son tells with pride that Larry Sr. was the first Republican on the House Judiciary Committee to vote for bills of impeachment in 1974 against Republican President Richard Nixon.

Larry Sr. ran for governor and lost the primary. He went on to become Prince George’s County Executive for two terms. Young Larry worked for him.

After that, as Larry Hogan Jr. worked in political campaigns, he also built a real estate business that had its own struggles, including a personal bankruptcy in the 1990s. But in the decades since, he’s been successful enough with Hogan Cos. to build a secluded home on waterfront property in Edgewater.

The candidate himself comes naturally to the glad handing of politics. He has a broad smile, a ready laugh, a firm handshake and a direct speaking style that can fire up a crowd, as he did at a boisterous rally before the state Republican convention in 2013, where he announced he was going to announce in January.

Of all the candidates in 2014 — four Republicans and three Democrats — Hogan was the very last to announce. But you could argue that he had been conducting a shadow campaign for three years through Change Maryland.

Steve Crim, political consultant who been working in public affairs, came in to run the campaign, but stayed far in the background.

From the get-go, Hogan was running a general election campaign. His three Republican opponents complained he skipped debates and blew off forums in front of Republican clubs and conservative groups.

The avoidance was deliberate. Hogan was throwing a wider net.

He stuck to his message of jobs, spending and tax cuts, and he refused to even discuss the social issues of guns, gays and aliens that engaged some of the Republican right. Those were decided issues, he said, even though he disagreed with how they had been decided.

Hogan’s core message, after all, was just an updated version of Ronald Reagan themes on the economy, spending and taxes, modified to succeed in a Democratic state.

Hogan won his primary with 42% of the vote. Republican voters appeared to recognize that he may have been the only one of the four with the personality and the message to take back the State House. Hogan never doubted he could do it, one campaign insider said.

The general election and beyond

Anthony Brown and Larry Hogan face each other in their third and final debate in October.

An initial public poll showed Hogan far behind Lt. Gov. Anthony Brown, who handily won his primary, depleting his own campaign war chest in the process.

Without the fundraising genius of the late Dick Hug, who had raised millions for Ehrlich’s campaigns, Hogan chose to accept what remained of public financing.

It kept him to a lean staff, while Brown had a large entourage burning up cash.

Hogan crisscrossed the state in a touring bus emblazoned with Hogan-Rutherford and Change Maryland signs. (The Brown campaign filed a complaint about his financial accounting for the bus as the lieutenant governor was driven around by state troopers in a state-owned SUV.)

The Brown camp tried to tie Hogan to social issues about guns, women and abortion, depicting him as “a dangerous conservative” in grainy campaign ads. The ads may have helped raised Hogan’s visibility while doing him no harm.

In the fall, polls by Hogan and GOP showed him closing in, and he was increasingly confident on the campaign trail and in debates, almost ebullient in the closing days of the campaign.

When Hogan talked about 40 consecutive tax increases, Brown had no effective response. O’Malley says he should have stressed the successes they had paid for.

Hogan won by 65,000 votes, 51%. Republican turnout was high throughout Maryland. Over half of independents went with Hogan, and Democrat turnout was low, but post-election polling by the Hogan campaign found 28% voted for him.

He was never very specific about how he would govern, both during the campaign and in the two and a half months since he was elected.

His inaugural address is unlikely to reveal much more, but on Thursday at noon, he has promised to release the fiscal 2016 budget, full of specifics.

He promised to change Maryland for the better. We’ll begin to see if he can deliver.

Analysis: Could Ehrlich fix the state and supply a positive vision?