BUSINESSES URGE HOGAN ON PURPLE LINE: In the latest effort to prod a skeptical Gov.-elect Larry Hogan to move ahead with construction of the Purple Line, a newly formed business coalition – including a dozen prominent area real estate and development firms—late Friday sent Hogan a letter urging him not to cancel or delay the light rail project, writes Louis Peck for Bethesda Magazine.

FISCAL CUTS & ANNE ARUNDEL COUNTY: Gov.-elect Larry Hogan is sharpening his fiscal scalpels to cut into a $1.2 billion deficit. But what does that mean for the financial expectations of Annapolis and Anne Arundel County? The Hogan administration isn’t talking when it comes to specific budget lines, Rema Rahman and Chase Cook report for the Annapolis Capital.

HOGAN & FRANCHOT SHOW: What are Republican Gov.-elect Larry Hogan and Democratic Comptroller Peter Franchot cooking up? In their second joint outing, the bipartisan duo and their wives dished out lunch Monday at Paul’s Place in the Pigtown neighborhood of Baltimore City. Hogan continues to work on his relationship with the comptroller, who holds a key vote on the three-member Board of Public Works, which will review all of the major contracts of the Hogan administration, according to MarylandReporter.com.

ENVIRONMENTAL ISSUES: Marc Steiner of WEAA-FM leads up to his annual Annapolis Summit, which will be held from 7 to 10 a.m. Friday, Jan. 30, 2015, by looking at environmental issues that will be addressed in the General Assembly. He hosts Dels. Anthony O’Donnell and Mary Washington.

JITTERY CHRISTMAS IN ANNAPOLIS: Political diviner Josh Kurtz of Center Maryland writes that the beauty and serenity of Annapolis at Christmas belies the jitteriness of Maryland’s political classes. From Democratic staffers worried about their jobs, to the slow roll-out of Gov.-elect Larry Hogan’s (R) cabinet appointments and policy initiatives, to lawmakers, lobbyists and advocates scrambling to adjust to the new reality – not to mention Democratic activists waiting for a party savior, or the Next Big Thing, or at the very least a coherent sense of direction – what should be a time of peace and reflection has instead become an unprecedented period of fear and loathing.

Government House, the governor’s residence, decorated for Christmas. This is the month of December photo in the new State House Birthday Calendar by MarylandReporter.com. Order one today.

HOGAN ON CHARTER SCHOOLS: The Sun editorial page says: “We’re heartened by Gov.-elect Larry Hogan’s recent remarks suggesting he wants to make charter schools a priority of his administration. Maryland currently has one of the weakest charter school laws in the nation, which has left parents here with fewer choices for educating their children than in many other states.”

REPLACING DEL. SCHULZ: Those interested in applying to replace Del. Kelly Schulz have a week to enter their name for contention, according to the Frederick News Post. Schulz, R-District 4, plans to leave her delegate post to become Maryland’s secretary of labor, licensing and regulation. Gov.-elect Larry Hogan last announced he was appointing Schulz to the Cabinet post.

MENTAL HEALTH NEEDS IN MARYLAND: Both Maryland and Virginia were in the top 10 of  states with the greatest rates of need for mental health services, coming in at No. 3 and No. 9, respectively.  According to Mental Health America’s “Parity or Disparity: The State of Mental Health in America 2015,” Virginia has just over 1 million adults with mental illness, Maryland has about 792,000 total, and the District has about 99,000 adults. Maryland was also ranked 4th for having the most adults with serious thoughts of suicide. Virginia was ranked 13th, Annys Shin reports for the Post.

INAUGURATION PLANS: John Wagner of the Post writes that Gov.-elect Larry Hogan (R) is planning three days of events next month to celebrate his assumption of office, including a gathering on the Eastern Shore he says will be less “fancy-schmancy” than his inaugural ball. “It’s going to be a little more laid back,” Hogan said of the “people’s reception” at Sailwinds Park in Cambridge, which will feature a country-western band, beer and oysters. “People can come in jeans.”

2 POLITICIANS, 1 BOUTIQUE: The 2 Chic Boutique in Pigtown in Baltimore City is the venture of state Sen. Catherine Pugh and Baltimore City Comptroller Joan Pratt — and an investment along Pigtown’s commercial corridor, writes Yvonne Wenger in the Sun.

ULMAN’S UM MOVE: Former Howard County Executive Ken Ulman said in the aftermath of his failed run for lieutenant governor, he wanted to play “as much of a role as possible” outside of the public sphere, writes Anna Isaacs for the Daily Record. The answer came in the form of launching his own consulting firm – Margrave Strategies LLC – and partnering with the institution he says he kept coming back to: his alma mater, the University of Maryland at College Park.

ETHICS LAW VIOLATION: The former spokeswoman for Wicomico County was found to have violated county ethics law for forwarding an email of a press event for former gubernatorial candidate Lt. Gov. Anthony Brown. According to the decision, former county spokeswoman Tamara Lee-Brooks violated the section of county code regarding “the prestige of his or her office” for the private gain of the Brown campaign. The decision was authored by members of the county Ethics Commission, Phil Davis reports for the Salisbury Daily Times.

LOESCHKE’S LEGACY: Rhetoric teacher Richard Vatz, in an op-ed for the Sun, writes about Maravene Loeschke, who resigned the presidency at Towson University due to health reasons. He writes, “This is no papering over of some “real reason” for her leaving; President Loeschke has as much or more widespread and deep support as president than any such leader has or has had not only at Towson, but perhaps anywhere. Loeschke was Towson’s best president, and this is particularly impressive in view of the consistent excellence of her predecessors.” 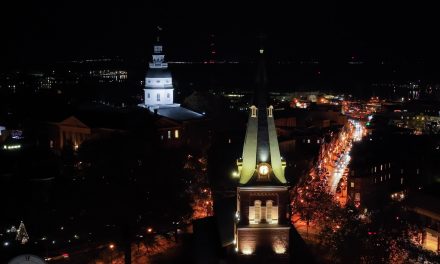