BUDGET ADJUSTMENTS: Maryland Comptroller Peter Franchot, in a speech at a Maryland Association of Certified Public Accountants meeting Wednesday, said he thinks adjustments can be made to fix the state budget, reports Rick Seltzer for the Baltimore Business Journal. “I emphasize the word adjustments,” he said. “I’m not talking about draconian changes.” Franchot walked a line between optimism legislators will reach across party lines and recognition such moves are rare.

STATE CENTER: The State Center complex in Baltimore is one of the remaining items that Governor Martin O’Malley may push for in his last month in office. WYPR’s Fraser Smith and Christopher Connelly talk about the origin of the project and why its future is in jeopardy.

FROSH DEFENDS ENVIRONMENTAL REGS: Stressing he doesn’t intend to “park” his beliefs at the door, incoming Attorney General Brian Frosh defended two controversial environmental initiatives that Gov.-elect Larry Hogan has vowed to repeal or block: the storm-water management fees levied on property owners in the state’s largest communities, which he said are needed to help clean up the Chesapeake Bay and new regulations aimed at reducing pollution from Eastern Shore farms, which he said are dealing with a leading source of the bay’s decline.

MORE TRANSPARENCY: Incoming Attorney General Brian Frosh promised to be “a strong advocate of transparency and openness” in a speech celebrating the 40th anniversary of Common Cause in Maryland, citizen group committed to open government issues, writes Len Lazarick for MarylandReporter.com.

HEALTH EXCHANGE BOON: Other than state officials, few people are more relieved by the newfound success of Maryland’s revamped health exchange than Dr. Peter Beilenson, reports Alissa Gulin for the Daily Record. Beilenson’s insurance company, Evergreen Health Cooperative, had a rough go of it during the first open enrollment period thank to the malfunctioning exchange. But now, with the Maryland Health Connection website working properly, in the two and a half weeks since the second open enrollment period began, about 800 Marylanders signed up for individual coverage with Evergreen via the exchange.

HEALTH INSURANCE QUANDRY: The days when Annapolis’ Prographics offered all of its employees health insurance may have ended. Costs have increased so much, they said, that it might be cheaper for employees to get their own insurance through Maryland’s exchange, rather than doing so through the company, reports Shantee Woodwards in the Annapolis Capital. The state does not yet offer an online marketplace for small-business owners, so it’s working with third-party administrators to establish coverage.

NO PLAN YET ON MD 75: Gov.-elect Larry Hogan reiterated his commitment to restoring highway funding to MD 75 during a visit to Frederick County but said he will need to further study the state budget to make a plan to do so, reports Kelsi Loos in the Frederick News Post.

GENDER DIVERSITY IN HIGHWAY CONSTRUCTION: Ray Frager in the Daily Record reports that a new report from the Institute for Women’s Policy Research and Jobs for the Future cites Maryland and Oregon as two of the few states that use federal transportation dollars to fund training and support services to improve gender diversity in highway construction.

DEM MUMMIES: Political pundit Fraser Smith, in a column for the Daily Record, writes that during the campaign for this past November’s election, Democrats could have made a strong case in Maryland that government worked well under the extreme circa 2008 pressure. Remember the Great Recession? Remember sequestration and its hobbling impact on hiring? Why didn’t we hear this argument?

GOP TRANSFORMATION IN DUNDALK? While Larry Hogan triumphed in the Maryland governor’s race, his fellow Republicans won legislative and the Baltimore County Council seats in Dundalk for the first time in decades, completing a dramatic partisan shift in one of the state’s once reliably Democratic strongholds. The realignment culminated after years of disaffection and may create a lasting transformation, opines the editorial board for the Sun.

FREDERICK LEGISLATIVE FORUM: New faces will participate in an annual ritual Saturday at Winchester Hall, writes Bethany Rodgers in the Frederick News Post’s Political Notes column. This weekend, the men and women who will represent Frederick County in the Maryland General Assembly will gather starting at 10 a.m. to hear what local residents want out of the upcoming legislative session.

POLICE VIOLENCE PROTEST: Annapolis-area clergy organizing Friday’s planned march to protest police violence have issued a call for a peaceful show of solidarity with the nationwide response to the deaths of unarmed citizens at the hands of police, writes Tim Pratt for the Annapolis Capital. The protest is set to begin at 5:30 p.m. at the Kunta Kinte-Alex Haley Memorial at City Dock. Demonstrators will march up Main Street to Church Circle and head east, ending at Lawyers Mall in front of the State House.

POLITICKING WHILE BLACK: Montgomery County Executive Ike Leggett doesn’t hold many news conferences, and when he does, they seldom feature personal reflections, writes Bill Turque in the Post. But his meeting with reporters on Wednesday took a sharp revelatory turn as he described a recent encounter with police that could be called “politicking while black.”

MOORE, HOGAN MEET: Cecil County Executive Tari Moore walked away from a nearly two-hour breakfast meeting with Gov.-elect Larry Hogan on Tuesday thinking that it might be the first of many positive exchanges. Moore and four other Republican county executives were invited to an issue-probing meeting at Harry Browne’s restaurant on State Circle across from the State House, reports Cheryl Mattix for the Cecil Whig.

HARFORD TERRORISM CONCERN: The day after a controversial new Harford County Council security policy was publicly unveiled that shocked some county residents and council members, the policy was still in effect and still being questioned even as Richard Slutzky, the new council president who introduced it, tried to move on. Slutzky said the change was necessitated by security concerns; however, the county’s former sheriff and the new sheriff say nothing of the sort was proposed, reports Bryna Zumer for the Aegis.

O’MALLEY CALLS FOR TORTURE PROBE: Gov. Martin O’Malley said he hopes the Justice Department will reinvestigate torture practices at the Central Intelligence Agency and reconsider whether to pursue criminal charges against those involved, writes Erin Cox in the Sun.

MINORITY BUSINESS GROWTH: Don Fry of the Greater Baltimore Committee writes in Center Maryland that the more than 230 business executives who attended the GBC’s Bridging the Gap minority business awards on Dec. 8 got a first-hand glimpse of why the private sector – not government – is a primary driver of minority business growth. For most of the seven minority-owned and woman-owned 2014 Bridging the Gap Award winners who were honored for outstanding business achievement, their success is rooted in relationships with private-sector customers and partners.

ASTRONOMERS GALORE: It’s nearly 15 times more likely that you will bump into a career astronomer in Maryland than on average in the wider United States, reports Anna Isaacs for the Daily Record. That bit of trivia comes from the Bureau of Labor Statistics’ Occupational Employment Statistics program. More specifically, it’s a reflection of what the agency calls a location quotient, which compares the presence of a particular job in a particular area to the national average concentration. 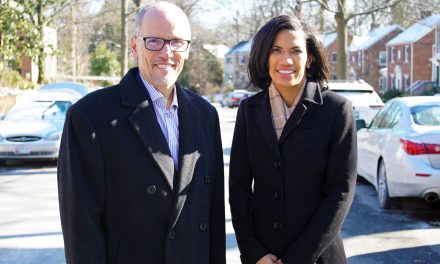