State Elections Board Vice Chairman David McManus wants to set the record straight. The board did not find a campaign violation had occurred when it investigated a finance complaint filed against Larry Hogan Jr., the Republican nominee for governor, he said.

The state elections board voted Thursday to waive a $50 fine in the case.

McManus, one of two Republicans serving on the five-member state election board, said he wanted to set the record straight after reading several media reports indicating Hogan and his grassroots organization Change Maryland had run afoul of campaign finance regulations.

“I made a motion to waive any fine because, I said, it was not clear a technical violation of Maryland law had occurred,” said McManus.

The motion was seconded by the newest member of the board, former Anne Arundel County Executive Janet Owens, a Democrat. The state board unanimously passed McManus’s motion 5-0.

Value of poll at issue in finance reporting complaint

The Maryland Democratic Party filed a complaint July 24 with the State Board of Elections alleging Hogan broke campaign finance regulations. In question was whether a political poll, paid for by Change Maryland during an exploratory period last fall, had a financial value that would qualify it as an in-kind contribution.

Candidacy and Campaign Finance Director Jared DeMarinis, who was responsible for conducting an initial investigation of the complaint, concluded the poll should have a value placed to it. However, DeMarinis, in a five-page report, also cleared Hogan and Change Maryland of any wrong-doing.

Owens said a presentation of the findings of the investigation was unclear and ambiguous, and that it would have been unduly harsh to impose a civil penalty.

“But it was absolutely clear that no regulations had been promulgated or developed,” when the alleged violation occurred Owens said. Since then campaign finance penalties for underreported in-kind contributions have been established.

The report said the campaign worked with the elections board in resolving the issue.

DeMarinis’s report also stated Maryland has no specific standard for valuing a poll, and if penalties were to apply to this type of campaign finance violation, state regulations determining such penalties had not been established when the alleged infraction occurred.

DeMarinis stated in his report the fine for “non-willful failure to include less than 10 contributions on a campaign finance report” was $50, and he requested that the board take a vote to determine if a civil penalty should or should not be imposed.

McManus, a lawyer, disagreed with DeMarinis’s findings on the poll.

“There is nothing in Maryland law that requires them to value [a poll] in any certain way,” McManus said.

Owens said she was skeptical of the value of the polls.

“I am a dubious person about polls,” she said. “I’ve run for political office. I take polls with a grain of salt. I think many of them have no value. That’s purely personal though.”

DeMarinis determined the poll should have value because of the context in which it had been used.

The Hogan campaign released a press release in May showing Hogan closing the gap between himself and Democratic frontrunner Lt. Gov. Anthony Brown by comparing the 2013 Change Maryland poll with a new 2014 poll.

But when the value of Change Maryland was determined by vendors used by Hogan, the poll was deemed to have no value because it was considered stale.

Hogan Campaign spokesman Adam Dubitsky said it is unfortunate that in this election much of the news media has been focused on trivial issues instead of the issues that matter most to voters.

“We’ve said all along we’re operating in good faith, and once again the Board of Elections agrees.”

Using federal guidelines, DeMarinis determined that the poll should be valued at $825. In early September, DeMarinis formally asked the Hogan campaign to amend their campaign finance report, which they agreed to. 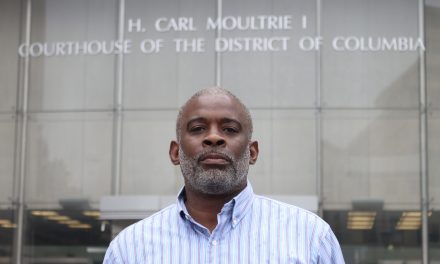