Partners for Open Space prepared this infographic to oppose the diversion of open space funds.

Environmental and land conservation advocates, along with county officials across the state, are gearing up to fight a Senate Budget Committee proposal to limit Program Open Space funding to $100 million a year.

The Maryland Association of Counties said the cap on open space funding would result in “devastating” cuts of as much as $263 million over the next five years.

“These reductions … would affect the State’s and local government’s ability to preserve open space, shorelines, and waterways while providing recreational opportunities,” MACo’s blog told local officials, urging them to contact their senators and delegates.

Program Open Space is funded by 1/2% tax on all real estate transfers, but this dedicated pot of money has been repeatedly raided to fund other programs.

Sen. James Ed DeGrange called for any money the transfer tax generates over $100 million to help with stormwater remediation. He said it should go to the State Highway Administration as part of its Watershed Implementation Plans.

The state has in effect been replacing cash with loans by diverting over the years much of the open space money from the transfer tax to the general fund, and replacing it with bond funds.

DeGrange, who serves on the state’s Capital Debt Affordability Committee, said, “We’re concerned about getting close to our limit” for bond debt.

By capping the amount spent on open space programs, the Senate committee would reduce the amount of bond debt the state would use to replace the open space money diverted for other programs.

Any extra money would go to fix polluted stormwater runoff from state highways, rather than for buying or maintaining state and local parks and recreation areas.

Open space money can not only be used to acquire farmland and forest, but it also goes toward development and rehabilitation of recreational facilities built on open space.

“The funds are urgently needed,” said Dru Schmidt-Perkins of 1000 Friends of Maryland, one of the Partners for Open Space, a coalition of environmental, conservation and recreation groups.

According to a fact sheet from the Partners for Open Space, $1 billion has been diverted from the transfer tax for open space over the four-decade life of the program.

Some of those unmet needs include:

“It’s not a slush fund to be used by the Senate for other purposes,” Schmidt-Perkins said.

She said the House Appropriations Committee in the past has sided with the Program Open Space advocates in resisting attempts by the Senate to divert the money.

“Yes, we’ll see this in conference,” when the House and Senate attempt to resolve any differences on the state operating and capital budget. 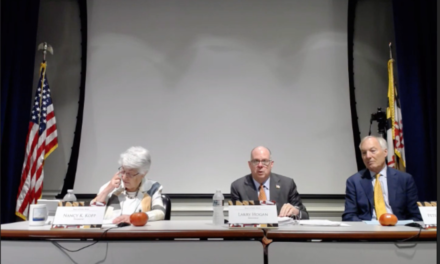