Analysis: From the back corner, a solid speech that was mostly true

From my usual corner at the back of the House of Delegates chamber, Martin O’Malley’s eighth and final State of the State address seemed one of his better efforts.

Think what you might of O’Malley’s accomplishments over the last seven years — the real subject of the whole speech — the gov is an effective communicator, except when he reaches too far for the lofty rhetoric of his beloved Irish poets.

This year, the guy who runs the governor’s teleprompter was relocated to my usual corner, so as I watched O’Malley deliver the address, I could also see it scrolling on the teleprompter screen. The speech was pretty good in the chamber, but it was even better watching it later on Maryland Public Television, though the governor’s gestures seemed a little overdone, too hot for the cool medium of the TV screen, but barely visible from the back of the room.

Both in the House and on TV, the applause of the delegates and senators was tepid as O’Malley led them to the mountaintop for a view of his good deeds as well as the future. They had heard much of it before.

The view of O’Malley from the back corner of the House of Delegates chamber. (MarylandReporter.com)

Sitting behind the mostly Republican delegates, the response was as stony as the mountains of Western Maryland.

But enough of a theatrical review. What about the substance?

The speech as written was about 3,500 words, and delivered almost exactly as written. In the printed text and online, there were another 4,000 words in 88 notes that cited the background for the claims and assertions O’Malley made. Most of them appear to be mostly true.

For instance, he said: “We have built up our Rainy Day Fund to $800 million dollars,  and we have placed this year in our general reserve an operating surplus of $37 million dollars.”

True enough, but putting aside 5% of general fund revenue for a rainy day is required, even though the umbrella is never unfurled when it is fiscally pouring. The $37 million surplus is the lowest it’s been in years, and too small to cover unexpected expenses, legislative analysts say.

The biggest misrepresentation is one that O’Malley has repeated often: “We have cut spending by $9.1 billion,” a figure that has gradually escalated over his two terms.

The telepompter operator in the back corner with reporters along the back wall behind Republican delegates.(MarylandReporter.com)

If O’Malley would simply say he “cut the growth of spending,” the statement would be accurate.

For a while, O’Malley and his press secretaries would qualify the statement, but lately he has reverted to the flat-out statement that he cut spending despite the fact that his total budget over seven years has grown by $10 billion.

What O’Malley should tout is that he had to take deliberate action — “tough choices” he likes to say — to restrain spending that automatically increases because of funding formulas, legislative mandates or entitlements. Without reducing those formulas, mandates and entitlements, the budget would be unbalanced.

The state constitution requires the governor to submit a balanced budget. (Some think tanks, such as the Mercatus Center at George Mason University, maintain that Maryland’s budget isn’t really balanced because of accounting gimmicks.)

O’Malley has indeed cut programs and staffing in some agencies. He brags, as he did in Thursday’s speech, about eliminating 5,800 positions. Thousands were already vacant, but eliminating unfilled but funded positions can be considered a cut. Spending grew more slowly than it had over the last 40 years.

What O’Malley did grow was funding for public schools, state universities and colleges and health care. That’s also where jobs, salaries and benefits have grown — not the executive departments which O’Malley directly controls.

The newest elements of the speech came toward the end, first where O’Malley discusses economics, Henry Ford and capitalism.

“We’ve lost sight of how our economy works when it is working well. Prosperity doesn’t trickle down from the top. It never has. It’s built from the middle out — and from the middle up.”

Here the notes cite not Pope Francis’s critique of “trickle-down” economics — the remarks that caused Rush Limbaugh to call the pontiff a Marxist —  but Neera Tanden of the Center for American Progress.

O’Malley’s version of capitalism doesn’t come from the interaction of capital, labor and markets, the way it used to be taught in Economics 101, but from consumer spending by the middle class.

This section of the speech led into a long pitch for increasing the minimum wage.

The speech concludes with ruffles and flourishes reminiscent of Martin Luther King and “I Have a Dream.”

“I can see a day… a time … a year” O’Malley said repeatedly, when Maryland’s children lead not just the nation, but the world in achievement; when technology personalizes every classroom; when high school students graduate with a technical skills and a year’s worth of college credit; when the environment is safe and clean; when the green economy creates thousands of jobs; and finally “when not a single child in Maryland will die a violent death.”

Noble visions indeed. And then O’Malley added the curious line: “The only things worth doing are the things that might possibly break your heart.”

It turns out that that is a partial quote from an Irish writer named Colum McCann, not a snippet from a country music song.

We’ll get back to you when we understand what it means. It may break your heart, if not your wallet. 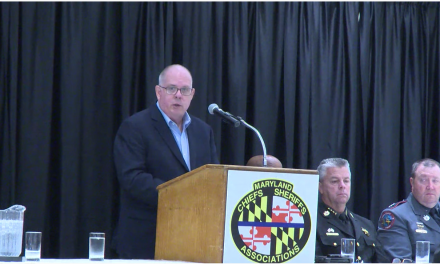