JUDGE RULES GUN LAW STANDS: A federal judge denied a pair of requests Tuesday to suspend key provisions in Maryland’s brand-new gun-control law, ruling that the plaintiffs had not made the case for the “extraordinary relief” they were seeking, the Post’s John Wagner is reporting.

In denying a temporary restraining order, U.S. District Judge Catherine Blake said the plaintiffs undercut their argument for an emergency suspension of the gun control law by waiting to challenge it until a few days before it took effect, Erin Cox reports for the Sun. “This suit could have been brought months ago, but it was not,” Blake said.

Meredith Somers of the Washington Times reports that Blake said, “There’s a strong public interest in lessening the risk of tragedies. Potentially the only economic harm could be on behalf of the dealers.”

CELLPHONE WARNING: Motorists around Maryland found their cellphone conversations interrupted by flashing blue lights Tuesday, as tougher restrictions went into effect on the use of hand-held devices while driving, report Krishana Davis and Pamela Wood in the Sun. Police were on the lookout for people driving with phones to their ears on the first day of a state law that makes the violation a primary traffic offense. Previously, drivers could only be cited if they were stopped for breaking another traffic law.

IMPACT OF FEDERAL SHUTDOWN: Gov. Martin O’Malley said Tuesday that the state could try to lessen the impact of a lengthy federal government shutdown by tapping a $100 million fund set up by the legislature to deal with the consequences of the federal sequestration process, writes John Wagner for the Post.

On Tuesday, Baltimore-area restaurants began tweeting out specials, discounts and messages of support for furloughed federal employees, writes Richard Gorelick in the Sun.

WYPR’s Fraser Smith and Karen Hosler talk about the partial federal government shutdown and how Maryland’s gerrymandered districts are a good example of why there is little compromise on Capitol Hill.

Matthew Bieniek of the Cumberland Times-News writes that if you’re caught by one of the rangers still on duty, you may be asked to leave the C&O Canal National Historical Park towpath. If you want help from an Internal Revenue Service local office, forget it. But don’t forget to pay your taxes, including those due at the Oct. 15 deadline for extensions from April.

Courtney Mabeus of the Frederick News Post writes that the shutdown has reached into Frederick County as well.

Kate Yoon and Alex Jackson chronicle how the shutdown has affected Anne Arundel County for the Capital-Gazette.

Caleb Calhoun of the Hagerstown Herald Mail writes about the shutdown and its affect on Washington County.

Thousands of federal jobs and employees call Montgomery County home, but many were not working Tuesday after Congress’ inability to compromise on the federal budget, shutting down most government operations, writes Kate Alexander for the Gazette.

Staff at the Salisbury Daily Times team up to mash up the day’s events, starting with the shutdown and the closing of beach area federal parks and following up with the glitches within the new federally mandated state health care exchanges.

Here’s a video of Marylanders’ reaction to the shutdown.

CONGRESS STILL GETS PAID: There’s no need for mitigating the impact of the shutdown on Congress, according to an AP story in the Frederick News Post. All 532 members are still getting paid at a cost of $10,583.85 per hour to taxpayers.

HEALTH WEBSITE GLITCHES: The state marketplace website where the uninsured could start buying health plans began having problems immediately after its scheduled 8 a.m. launch. Delays continued all day with people still unable to get onto the site by early evening, report Andrea Walker and Scott Dance for the Sun. The exchange was among many across the country with opening day hiccups.

TROUBLED WATERS DAY III: Alex Jackson of the Capital Gazette, in Part III of its series on cleaning up the Chesapeake Bay, writes that federal, state and non-governmental organizations in Maryland have spent at least $15 billion to restore the Chesapeake Bay. But when asked recently how much has been spent since plans were hatched to save the bay, a range of experts and officials said they just don’t know. And the results are equally elusive

COMMON CORE FORUM: Maryland State Department of Education officials have decided not to yield to public opinion and will not let the public stand to ask questions at tonight’s forum on the common core in Prince George’s County, reports the Sun’s Liz Bowie. A video of a man being arrested for speaking up at a public forum the state held two weeks ago got about 500,000 page views, and the department’s rule of not allowing speakers was widely criticized.

HERSHEY SWORN IN: Saying that this is “a great moment for the Eastern Shore,” Maryland State Senate President Mike Miller administered the oath of office to Stephen Hershey, the new senator from the 36th District. The ceremony took place a noon on Tuesday in the Senate Chamber in the State House as dozens of Hershey’s relatives and friends looked on, Jack Shaum reports for the Cecil Whig.

ARUNDEL RETIREE HEALTH SYSTEM: Saying Anne Arundel County is “on a path to bankruptcy if it doesn’t address this issue,” County Executive Laura Neuman told county government employees Monday that significant changes to retiree health care plans must occur to repair a system she described as financially unsustainable, reports Pamela Wood in the Sun. In a letter to workers, Neuman said the county needs to change how much it contributes to retiree health plans and how long it takes for employees to become eligible. 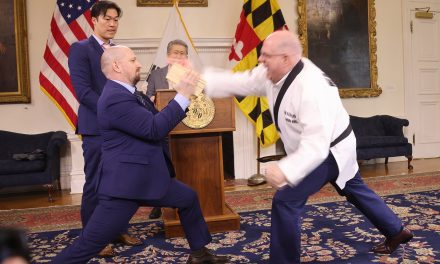 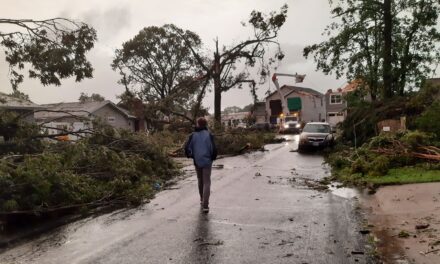