Republican Del. Ron George, an Annapolis jeweler, launched his campaign for governor Wednesday in a small room with a big crowd that enthusiastically embraced his message of lower taxes and smaller, more efficient government.

“It must be so frustrating for the Democrats that we just don’t give up,” said George.

He was the second Republican this week to announce a race for governor, and is little known outside Anne Arundel County, where most of the 200 people who attended the event at the Annapolis Sheraton live. But Anne Arundel is the most Republican of Maryland’s large counties, with twice as many registered Republicans as Harford County, home of David Craig, the county executive who announced his run for governor Monday.

George emphasized his long experience in the private sector, which includes two retail jewelry stores and an Internet sales operation. “He’s the first candidate in a long time that’s from business,” said Jim Pelura, the former state GOP chairman who is supporting George.

Sen. Ed Reilly, an Anne Arundel County insurance broker, said George knows firsthand about all the taxes, fees and regulations saddled on small business owners by the Democratic legislature. But Reilly said he was backing George because of his stand on social issues.

There is “no greater supporter of right-to-life issues” in the House of Delegates, Reilly said. He also noted that Ron and his wife Becky George had home-schooled their six children.

But while others emphasized George’s support for such issues as requiring legal residence for immigrants to obtain a driver’s license, the delegate himself laid out a 10-point program that stressed lower business taxes, eliminating government waste and fraud, more effective public education and school choice through private school “scholarships,” more commonly called vouchers.

He also promised to repeal the gas tax hike passed this year and the “rain tax” on stormwater runoff that both go into effect July 1, one of the evening’s big applause lines.

He also proposed tax credits for purchasing goods in Maryland.

“I know how to compete with Virginia. Give me that opportunity. Let me at it,” George said.

“When I’m governor, Maryland will no longer continue to raise taxes, increase spending and not care that businesses and investors are leaving,” George said. He said he would concentrate on building the tax base in Baltimore City, helping to reduce some of the state aid the city receives from other counties.

The Legislative Policy Committee will hold a hearing today on the prison scandal that led to the indictment of 13 correctional officers at the Baltimore City Detention Center. George said that he had bills in for prison reform in 2008 and 2009 that would have made them “true rehabilitation facilities.”

George was twice elected to the House in the three-member District 30, which includes Annapolis. House Minority Leader Nic Kipke, another Anne Arundel Republican, noted that in 2010 George got more votes that House Speaker Michael Busch, who represents the same district.

In the newly drawn legislative districts, George would no longer represent Annapolis, and was placed in District 33, dominated by Severna Park.

Young-of-year rockfish have another poor year in Md., better in Va. 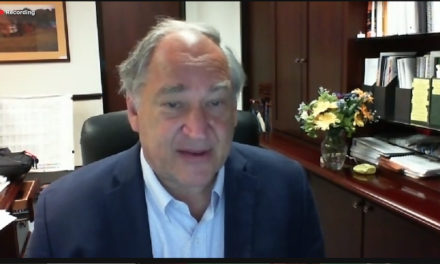