GUN MEASURES IN SECRET: Members of the House have considered Gov. Martin O’Malley’s controversial gun-control bill in secret, with the speaker and other key lawmakers meeting with lobbyists, experts and state officials in a closed-door conference room that has been off-limits to the public, Aaron Davis and Kate Havard report in the Post.

REASONABLE FEES: Sun columnist Dan Rodricks writes that he pretty much did a double take when a spokesman for the National Rifle Association in Maryland said Tuesday that his organization would not be opposed to requiring people to get a license before purchasing a handgun — as long as the licensing fees were reasonable.

DEATH PENALTY REPEAL: The mother of a murder victim continues her push to repeal the death penalty with one state senator who lost a son to a drunk driver, writes John Wagner in the Post.

The AP is reporting at WBFF-TV that Gov. O’Malley will testify today before the Senate Judicial Proceedings Committee and the House Judiciary Committee in Annapolis on a measure to repeal the death penalty in Maryland.

TRANSPORTATION FUNDING: Maryland lawmakers believe legislation that includes some tax hike to fund transportation projects is on its way — and some say it has better odds this session, writes Alex Jackson in the Capital-Gazette.

OFF-SHORE WIND: Pamela Wood of the Capital-Gazette reports that Gov. O’Malley promoted his offshore wind power bill yesterday to senators who have spiked such bills the past two years.

O’Malley predicted that the construction of wind turbines 10 to 30 miles off Ocean City would support 850 temporary jobs and 160 permanent ones, writes Tim Wheeler in the Sun.

John Rydell of WBFF-TV reports that some state legislators find the proposal problematic.

Mark Newgent of Red Maryland opines that while the politics surrounding O’Malley’s wind farm proposal have changed – afterall, an opponent was replaced on Senate Finance Committee, which killed the bill two years in a row – the economics of the situation have not.

ATTRACTING FILMMAKERS: Andy Brownfield of the Washington Examiner writes that given the success of productions recently filmed in Maryland, such as HBO’s “Veep” and Netflix’s “House of Cards,” a legislative panel has discussed more than tripling the incentives given to companies that film in the state.

SEWAGE SPILL FINES: Lawmakers and representatives of Maryland’s county and municipal governments sparred Tuesday over a pair of bills in Annapolis that would raise the fines for sewage spills that annually dump millions of gallons of untreated waste into local waters and the Chesapeake Bay, reports Tim Wheeler in the Sun.

COMMITTEE SESSIONS: Len Lazarick of MarylandReporter.com blogs that Maryland citizens will have to wait at least another year to get remote access to one of the most important but least accessible parts of the legislative process: committee voting sessions in which bills are amended, killed or sent to the floor.

ELDERLY CRASH RATES: Elderly drivers are sometimes viewed as hazards on the road due to poor eyesight and diminished reflexes, but a preliminary report by the Maryland Motor Vehicle Administration found that drivers between the ages of 75 and 89 actually had the lowest crash rate of all other age groups, MarylandReporter.com’s Becca Heller reports.

LOVE, SUE & JOE: About 60,000 subscribers of the Baltimore Sun from the Baltimore City to Phoenix got a special Valentine’s Day message from Dels. Sue Aumann and Joe Boteler, who were sending their love to constituents in their new district, writes Bryan Sears for Patch.com.

LEOPOLD SUCCESSOR: Less than 24 hours after he said he’d introduce legislation to keep chief administrative officer and acting County Executive John Hammond in the county’s top job by offering him his current pay, which is higher than the county executive’s, County Councilman John Grasso changed his mind, Allison Bourg writes for the Capital-Gazette. 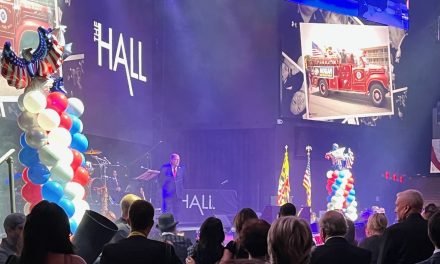