SANDY CHANGES EARLY VOTING: David Moon of Maryland Juice blogs that early voting is not going to be open on Tuesday. Gov. Martin O’Malley issued an Executive Order to make the call. But polls are expected to be open again on Wednesday — and an extra day has been added to the early voting period, which will now run through Friday, Nov. 2nd. Polls will be open from 10 a.m. to 8 p.m. Below the video is a list of early polling places.

State elections administrator Linda Lamone said it would not be possible to extend early voting beyond Friday, because poll workers need time to transition to regular voting on Nov. 6, Matthew Hay Brown writes in the Sun.

Early voting has been popular as Montgomery County voters cast nearly as many early ballots in just two days this year as in the previous election, write Kate Alexander and Natalie McGill for the Gazette.

CLOSED: The Capital Gazette lists road closings around Annapolis plus which federal, state and local government offices are closed.

The Daily Record lists the courthouses and court offices that are closed.

MARC and Amtrak service has been canceled today, according to WBAL-TV.

AMERICA’S WEATHER IN MINIATURE: Ian Duncan of the Sun reported late last night that Gov. O’Malley said Maryland was experiencing “America’s weather in miniature” as the remnants of Sandy approached the state bringing blizzards in the west, tidal flooding in the east and wind and rain everywhere else. “This is goin to be a long night,” O’Malley said. “The next 12 hours of this storm will likely be the most intense.”

O’Malley said Pepco and BGE — the state’s two largest utilities — have brought in extra crews to help assess damage and restore power after the storm, but that many residents could remain in the dark long after the storm leaves the mid-Atlantic, reports David Hill for the Washington Times.

ECONOMIC IMPACT: Hurricane Sandy will have a devastating impact on life and property, economist Peter Morici writes for the Baltimore Business Journal. However, gauging its ultimate impact on an economy-still struggling to overcome the Great Recession but with substantial resources to overcome adversity-is far more complex than merely adding up insurance payouts and uninsured losses.

BEFORE YOU VOTE: Anne Arundel County voters have the state’s busiest ballot, writes Allison Bourq for the Capital-Gazette. With that in mind, local elections officials are urging county voters to take the time to learn the ballot before heading to the polls this year.

PRINCE GEORGE’S TIPPING POINT: Right now, Prince George’s County is Maryland’s Ground Zero as Election Day approaches, opines Josh Kurtz in Center Maryland. The county, so full of potential but with so many demons to shake off, once again appears to be at a tipping point.

EXPANDED GAMBLING: John Wagner of the Post answers two questions concerning expanded gambling: Could a Prince George’s casino move forward if a majority of voters in the county don’t support the ballot measure? And ads from Question 7 opponents say that last year, Maryland politicians “raided $350 million from the Education Trust Fund.” What’s that about, and is it true?

EDWARDS AS MAVERICK: U.S. Rep. Donna Edwards once again bucks the establishment and takes a hard stand, this time against expanded gambling in Maryland, writes Miranda Spivack for the Post.

TEACHERS DON’T ENDORSE GAMBLING: The Maryland teachers union voted not not endorse the expansion of gambling in the state, even though raising revenue for education is the expansion‘s primary purpose, Matt Connolly reports for the Washington Examiner.

SAME-SEX MARRIAGE: Annie Linskey of the Sun looks at the recent commercial that Opponents of Question 6 are airing that claims same-sex marriage could be “taught in schools” if the law is upheld in the November election and determines that the claims are false.

POLL ON O’MALLEY: Half of Marylanders view Martin O’Malley’s performance as governor favorably, but only 1 in 5 say they would support him for president, Michael Dresser reports about a new poll conducted for the Baltimore Sun.

BAY CLEANUP CHALLENGE: A Baltimore law firm is trying to drum up interest from small counties to challenge Chesapeake Bay cleanup efforts, reports Pamela Wood of the Capital-Gazette. Chip MacLeod and Jefferson Blomquist of the Funk & Bolton firm were first hired by Dorchester County’s commissioners and are trying to sign up other counties. 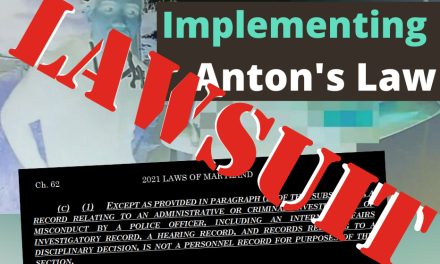