You’re walking down the street and you get a text message on your smartphone about the Chipotle restaurant around the corner. That’s interesting. How did they know you liked Chipotle?

And wait a minute. How did they know where you were?

That’s an example Attorney General Doug Gansler gave in an interview last week about the far reach of Internet data collection into our daily lives, from dining choices to GPS connections.

As the new president of the National Association of Attorneys General – NAAG for short – Gansler has targeted Internet privacy as the focus of his year at the top.

“Most of the things we look up on the Internet are free, but there’s a legitimate interest for those companies to make money,” Gansler said. “Where to draw that line is the dialogue we’ll be having in NAAG.”

When he got on the ladder to become the president of the organization, “people were saying that [privacy issue] will all be taken care of” in two years, but of course that hasn’t happened.

“Over time, the attorneys general really have become the Internet police,” Gansler said. “There’s a huge vacuum on the Internet” and “we allowed the Internet to police itself.”

Acting jointly, the attorneys general have take action against Internet firms, first pressuring Craigslist to close down what Gansler called its “online brothel” of ads for “adult services.” In February, Gansler initiated a letter from 36 states to Google objecting to its new privacy policy, which gave consumers no ability to opt in or opt out of the information sharing.

Perhaps the best known joint action by the attorneys general was the 1998 multi-billion settlement with the tobacco companies over health costs to the states, a settlement still generating revenue for Maryland and 45 other states that joined in the suit.

Randolph May of the Free State Foundation

Randy May, president of the Free State Foundation, a free-market think-tank in Potomac that specializes in Internet and communications law, took an opposite view.

“It is preferable to have the privacy regime at the national level,” May said. “Most of the websites that we are concerned about with potential violations are really operating on a national basis.”

The Federal Trade Commission “can act pretty quickly,” and has recently leveled substantial fines against Internet companies that have crossed the line on privacy issues, he argued. If the FTC is not acting quickly enough, the attorneys general could certainly prod it into action.

May said that the state attorneys general could take an active role together in bringing issues to the attention of the FTC in a form of “cooperative federalism.”

May and Gansler advocate similar goals: consumer protection of personal privacy, especially through transparent notice of privacy protection policies. “I want to empower consumers to make informed choice,” May said.

“Then if a website doesn’t live up to its policies, it’s appropriate to take enforcement actions,” but the cost of individual actions by the states could outweigh the benefits.

“We don’t want to go so far that the regime imposes undue costs on the economy,” May said.

Unlike previous initiatives by NAAG presidents on fraud and human trafficking, “there are no clear answers to some of this stuff” on the Internet, Gansler said. “You really want to flesh out these issues, and get these issues in front of the attorneys general and their staff.”

Gansler prefers to get voluntary cooperation from the Internet companies rather than file lawsuits against them. When issues are brought up with the firms, they will sometimes admit, “Yeah, we know we’re pushing it too far,” he said.

“They also don’t want bad law from a case that goes against them,” Gansler said.

The biggest issues are data collection and data dissemination, he said. “What does Amazon.com do with that information? How do they store it? Do they sell it?”

Centrist but still an Obama supporter

The NAAG presidency alternates between Republicans and Democrats, and currently the association is almost evenly divided between 24 Democrats and 26 Republicans. He said it is jokingly called the National Association of Aspiring Governors.

“I’m a very moderate, centrist person,” Gansler said. “I get along with both sides.”

That may be the case, but Gansler’s office on the 22nd floor of a Baltimore office building is dominated by an iconic print of Barack Obama over his desk. Gansler is proud to have been one of the first 10 statewide officials in the country to endorse Obama before his primary wins in 2008.

Gansler is still a strong supporter, and Maryland wrote the lead amicus brief to the U.S. Supreme Court supporting the Affordable Care Act. Twenty-six states opposed the act – all the ones with Republican attorneys general.

“This was not a close case,” Gansler said. “It should have been 9-0” rather than the 5-4 decision, and he had fully expected Chief Justice John Roberts to write the opinion upholding the health care changes.

“It never crossed my mind that they were going to overturn it,” Gansler said. 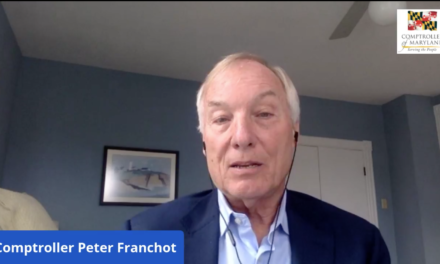 Offshore wind: a valuable investment or a waste of money?